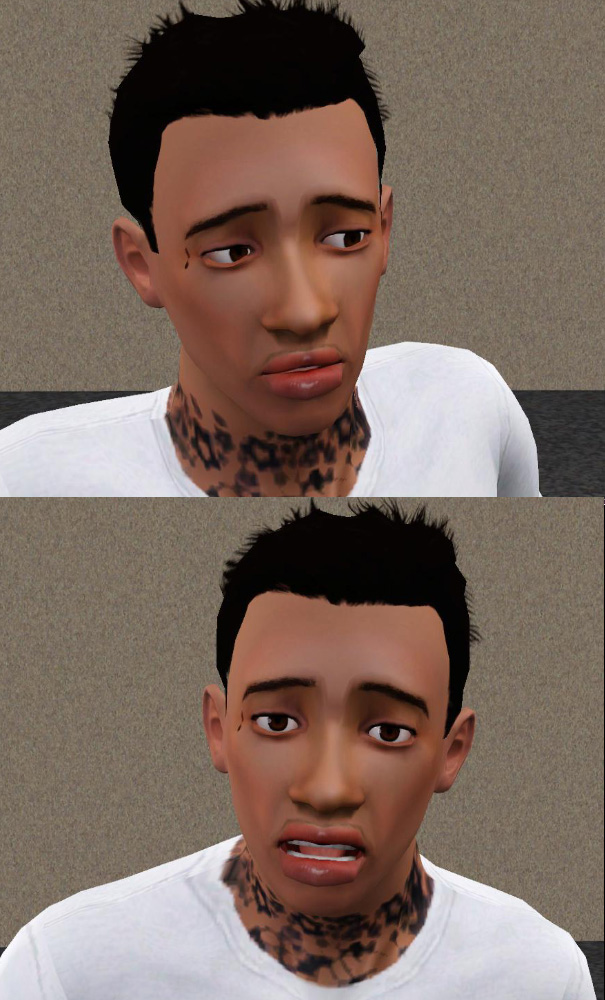 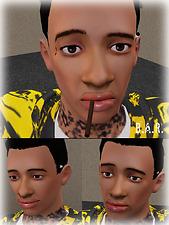 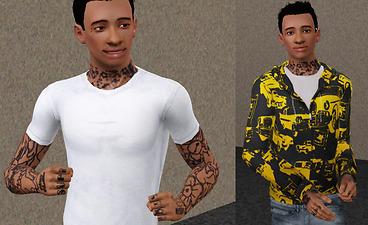 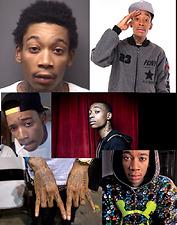 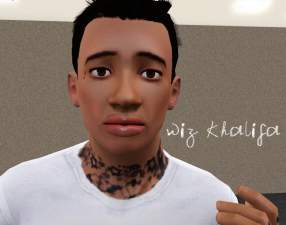 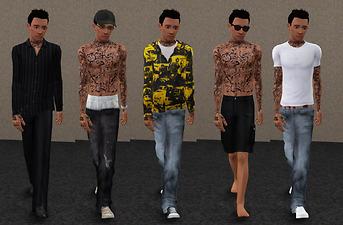 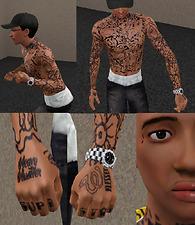 After uploading my Nicki Minaj sim I got a lot of requests for more...urban...sims. Someone suggested that I do Wiz Khalifa and I decided to give it a shot.

Who the hell is Wiz Khalifa? That's the exact same question I asked when I first heard his name. Turns out he's a quasi-underground rapper from Pittsburgh, Pennsylvanian and has been out for quite some time. I've become quite a fan of his and I enjoyed making this sim.

As usual, I have to make *something* custom for each of my sims. I tried to do a custom facial hair but I could not get the mustache to show up in game to save my life. So instead, I became really OCD and made tattoos for Mr. Khalifa.

The AmbTattoo placement system didn't work for this sim, so I had to go old school and make the tattoos as accessories. Wiz's chest/sleeve/back/neck designs are on one big tattoo categorized as gloves. His face tattoo is separate and found under costume makeup. The tattoo designs are NOT meant to be replicas, instead they are simply there to create the "look" of Wiz Khalifa. In fact, only about 26.65343 percent of the design is even close to his actual tattoos. The chest, back and arm sleeves are just free images I found off Google. However, I did try to recreate his hand/finger tattoos to the best of my abilities.

Some parts of the design are so small and intricate that the game kinda chews up the texture. I've remade these over and over again, and this is as sharp as I can get them.

I received some comments that the tattoos are too dark for some people likings. I do have to agree with them. The tattoos are recolorable so I suggest you lighten them up in CAS.


There are two versions of Wiz, one with all the CC applied to him, and one without custom hair. If you do NOT plan to use the custom hair listed, use the BASIC version of the sim. There are known issues with installing a sim without the hair installed.

The basic sim will look similar to this in CAS (depending on what your default skin is): **Wiz's face and body were altered extensively with custom sliders, without these sliders installed, the sim will *snap* out of shape whenever you try to alter him.

All CC listed below is NOT included!

Genetics
-Default Replacement Skintone (Body Only/Barbie) by Club Crimsyn
-Gary Conversion Eyes (Defaults) by Shyne
**It seems Shyne deleted the default version so you can use the contacts instead if you really like the way they look. If not, just let whatever default eyes you have show.

Pattern
The cars pattern on his hoodie is part of the Ralph Lauren Preschool Shoes by LJgaming. You have to download the shoes because the pattern is embedded in the package file. It's a cute shoe, so I'd recommend downloading anyways. If not, nothing bad will happen, the game will just pick another random pattern and apply it to the hoodie.

Cigarette In Mouth Accessory is not packaged with sim, it is simply used for screenshots.