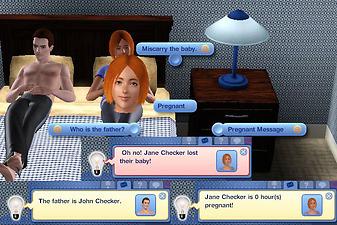 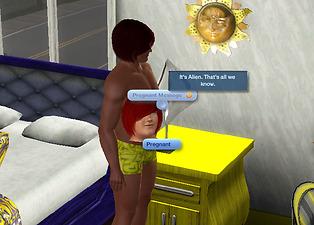 Seasons
Updated for Seasons. A male Sim's alien pregnancy will register though the only options are limited to just the Pregnant message which is grayed out saying "It's Alien. That's all we know."

I tend to be a forum lurker at times, especially when it comes to challenges. Anyhow a few times I've seen a message posted by someone who's deaf IRL asking how to check if a Sim is pregnant after a Try for Baby since they cannot hear the chime. And I don't know about the other folks but sometimes the chime in my game does not sound at conception and some people like to play with the game muted for whatever reason.

So I decided to make a one click method mod to check if the target Sim is pregnant for those who want to know right after a Try for Baby if their Sim is pregnant.

This will add an pie menu option to pregnant Sims that say "Pregnant", which leads to three interactions.
*Pregnant Message

"{target's name} is {number} hour(s) pregnant!" The number is the number of hours since conception.

*Who is the father?

The mother will lose her baby and, unless she has the dislike children trait, have a broken heart moodlet.

If you don't like the wording you can use Easy STBL Manager by CmarNYC to easily edit the strings.

The pie menu option will not show up on Sims that are not pregnant since an interaction requirement is that the target Sim is pregnant. 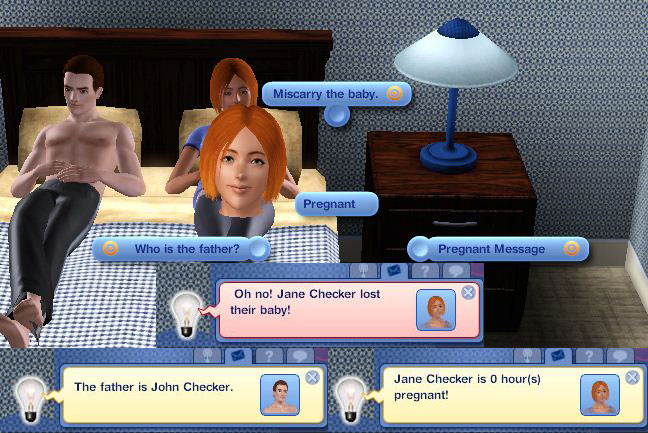 The pie menu option will show up right after conception as seen in the picture above taken right after a successful Try for Baby. It will show up on Pets and Sims outside the household, even before they are showing or shows first signs of being nauseous. As soon as the baby is born, the option will disappear.

See: Game Help:TS3 CC Basicswiki for a full guide!
Back to download view
172 Comments / Replies (Who?)