by scumbumbo Posted 13th Jul 2015 at 5:28 AM - Updated 13th Nov 2017 at 11:01 AM by scumbumbo : Updated for Feb 4 game patch
February 06, 2020 - Scumbumbo has passed on but his work and memories are still being kept alive by many of those whose lives he has touched. To download fixes for his mods, please check <a href="https://scumbumbomods.com/">https://scumbumbomods.com/</a> and please direct any questions or concerns to his discord channel linked there. 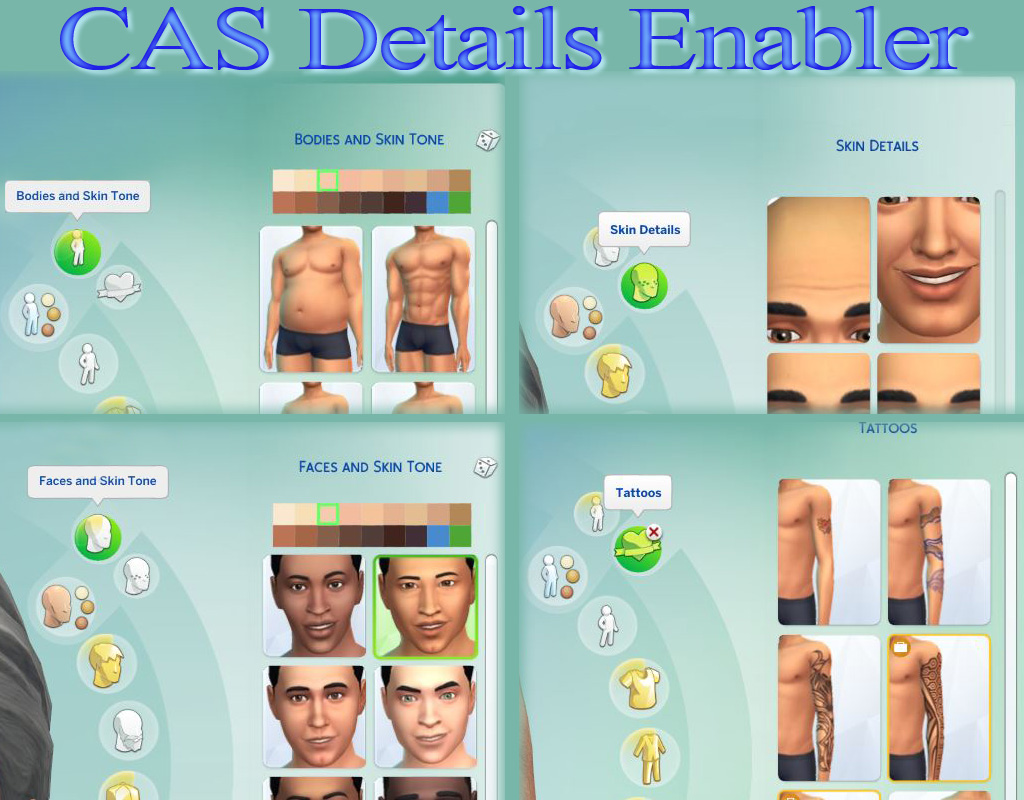 INCOMPATIBLE WITH CURRENT GAME VERSION - I don't know if I'll be able to update this mod any time in the near future, I wrote it so long ago I've basically forgotten nearly everything about how I wrote it. Was kind of like working in assembler language to edit the user interface I remember that much! If I can find any notes I left myself regarding the mod an update may be possible in the future.

This mod will enable all of the skin and facial details in CAS without requiring testing cheats or CAS full edit mode. It doesn't enable full edit mode (I tried many approaches and wasted many hours, trust me!) but it does unlock the following CAS menus for use anytime CAS is used:Although I was trying to get full edit mode always working, this is still pretty useful as I know a lot of people would like to be able to change tattoos on a sim after creating them. Still inaccessible is the fatnes/fitness sliders, and full body modifcations (although you can choose a new "set" body type). I'll keep plugging at enabling the full edit mode when I get the chance.

To install, just drop the package file into your mods folder.

This mod will conflict with any other mods which alter this portion of the CAS user interface, specifically the cassimcontextmenu (S4_62ECC59A_00000000_CAEE355CE0B704F7). Due to the wide variety of mods and sources for them, it is unlikely I will be able to help you with such a conflict.

Additional CreditsThis mod was brought to you by the letter eight

Need more information?
Back to download view
96 Comments / Replies (Who?)