Animal Pack Pt. 1 (Plus Some Announcements) 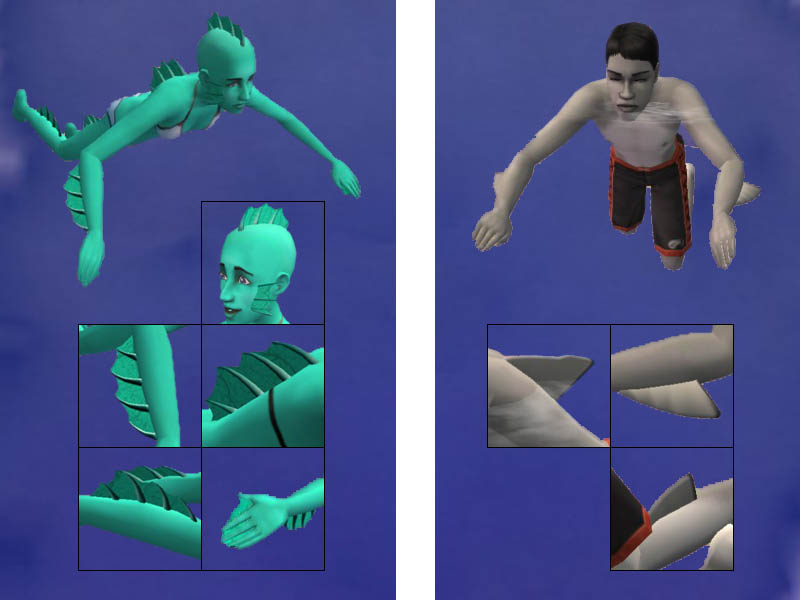 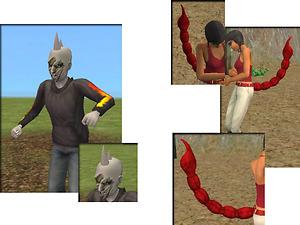 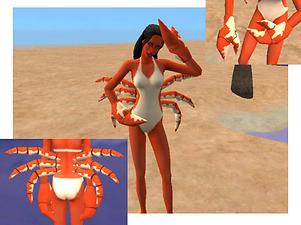 804 Thanks  Thanks     86 Favourited
This is a new mesh, and means that it's a brand new self contained object that usually does not require a specific Expansion pack (although this is possible depending on the type). It may have Recolours hosted on MTS - check below the description for more information.
Picked Upload! This is a picked upload! It showcases some of the best talent and creativity available on MTS and in the community.
I had to split this one into two. This part contains 13 animorphic accessories.

I didn't really know how to do this with so many accessories, so they're grouped according to the sim modeling them

First off, we have the green gill girl modeling the spined fins, which attach to the head, face, arms, legs, and back, and the webbed fingers.

Shark boy down there is modeling the regular fins, which attach to the back, arms, and legs.

We also have a crab lady, with crab legs that attach to the back and hand pinchers, who was a pain in the butt to take screenshots of.


Notes:
These accessories will stay on all the time, even in the shower. They can all be worn with other accessories, but you can only wear one on each part of the body at a time. For example, you can't wear the arm spined fins and regular arm fins at the same time.

All of these accessories are toddler-elder, except the webbed fingers and hand pinchers. I was having major problems with the hands, especially the ring finger, and I couldn't make them work. They don't work perfectly even now, but they were as close as I could get. The webbed fingers are from teen-elder, and the hand pinchers are for young adult-elder. They are all for both male and female.

Also, because there are so many accessories, I've include a .rar containing the .rars for all of them, so you can get them all at once.

Redistribution Policy: Recolor at will, but do not redistribute the mesh without permission. All recolors should link back to this post. Do not upload to any paysites, and do not upload to the Exchange. I know they're pretty much nonexistant, but feel free to use any color I include with my meshes in your own creations, as long as credit is given and a link to the mesh is provided. All content is by Maxis or me.


And for the announcements. First of all, I apologize to everyone who requested the stuff in this pack and the other part of it. I had no idea it would take so long.

I'm also having a lot of computer problems lately, so that's why I've been uploading so sporadically. These huge packs aren't helping. My next upload is going to have one accessory, I swear. And there's school and family and everything else.

So this is where I announce that I'm no longer taking any requests. I've always been very open to requests, but it's starting to catch up to me. I'm working very slowly nowadays, and people who make requests usually seem to think they'll get their accessories in a matter of days, when in truth it may take me months to get to it. I still have quite a backlog of requests, and hopefully I'll still be able to do them all one day, but I have no idea when.

Also, feel free to ask for recolors of my stuff, but don't ask me for them. I do my best to make the texture map as simple and functional as possible, so give it a go on your own or get someone else to do it for you. This isn't actually anything new, I'm just saying it so the people who ask for recolors won't think I'm just ignoring them. I kinda am, but that's because I don't do that.

And finally, I'm going to be going back and updating a number of my old accessories. I'm learning more and more all the time, which is great, but the downside is that I didn't know this stuff before. I don't want to upload a whole new post since a lot of them are already linked to from elsewhere, so if you've downloaded a lot of my stuff be sure to check my profile every so often. When I update something I'll change the title to say "UPDATED 5-14-06" or whatever.

I think that's everything. Enjoy.

There are 4 recolours of this mesh on MTS:


These recolours may or may not be endorsed by generalzoi.