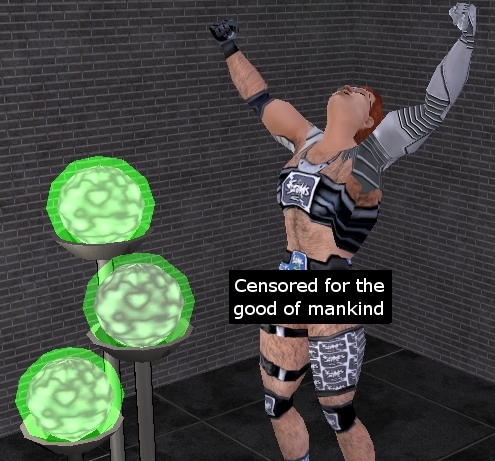 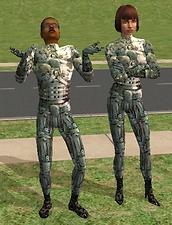 967 Thanks  Thanks     37 Favourited
This is a featured upload! It showcases the best talent and creativity available on MTS and in the community.

In an alternate reality a battle rages. A war fought in cyberspace. A war between MTS2 and an unnamed enemy which shall soon be revealed. A war that brings out the best in some, and the worst in others. A war that finally allows Delphy to show off his crown jewels to all the ladies...

I decided that the image may scare some younger users (and possibly some much older ones as well)...

Before I start waffling on, I'd like to thank a lot of people for helping me make this career better that i ever could have on my own-

Lethe and Delphy, who helped come up with the ranks for everyone.
Xanathon, for allowing me to transform his Xanathon Oracle into an Ion Cannon Control Panel.
Milano, for creating the uniforms especially for me.
Vagrant, for working out how to link clothing and careers.
Bink13y, for providing the lovely Delphy sim
All the moderating team in chat for putting up with my babbling, and an apology for showing you all the very first picture of Delphy- uncensored!

MTS2 Battle Mode takes you through the stages of the MTS2 War machine, from new recruit to General. Throughout the journey you'll find out some amazing facts, including

**What is MTS2 fighting against?
**Who gets a full blast of LyricLee's fury?
**Which two pilots aren't 100% whole?
**The question everyone’s been asking- does Numenor wear Speedos or thongs?
**It can't all be happy and smiley- find out which unfortunate moderator does not make it through (P.S. It's not who you think)

The levels are as follows-
Welcome to Boot Camp!
Down at the Cyber line
The Artillery Assembly
Tank Team Terror
Aboard the Nautilus
Up-Diddly-Up
Within the Lion’s Den
N-Department
Ion Cannon HQ
The Final Blow

The uniforms were very kindly made for me by Milano, and so cannot be found anywhere else. I asked for a kind of metallic look that would look good as a cyber suit- the final product was better than I could ever have hoped for-

Your sim will go to work like that every day, as to enter the fighting you need to be wearing a protective cyber suit- you can’t fight in a thong! (Well, I suppose you could try...

The reward, which appears at the end of the career, is made by Xanathon. The object and texture remains the same, but its description is radically different. A still snap of the lamp, as Xanathon has noted, does not display its full colour changes-

The full description of the original object can be found here-


Other details
*Unique GUIDs for everything, so no overwriting
*Everything will work with or without Expansion packs installed
*Full chance cards- some of the longest I've written, totalling around 20 pages in word
*Top pay is around $1500
*Maximum reward bonus is $15,000
*Language enabled, so English will appear in all versions of the game
*Includes a new icon (my own, so it's a bit basic)

Everything being said- enjoy my little piece of complete and utter madness!

P.S. No sims were harmed in the making of this career.