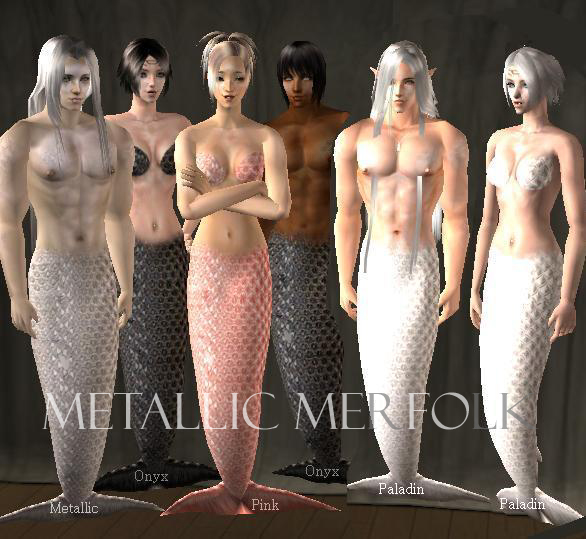 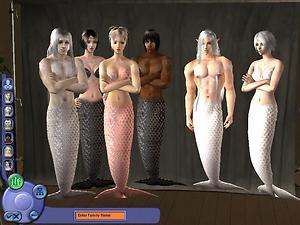 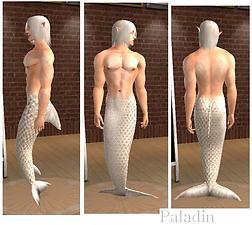 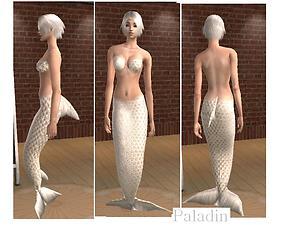 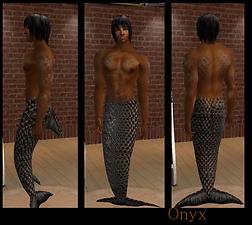 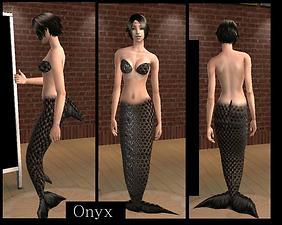 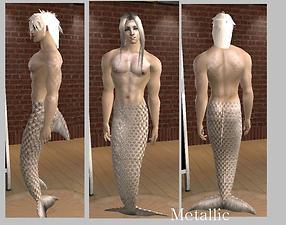 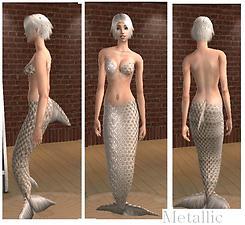 535 Thanks  Thanks     62 Favourited
This is a new mesh recolour, and means that you will need to download the particular mesh itself in order for this to show up in your game. See the Meshes Needed section or read the text for more information.
Picked Upload! This is a picked upload! It showcases some of the best talent and creativity available on MTS and in the community.
Hello Everyone! Here is my latest set of recolors, a collection of Metallic Mermaid Tails for Adult Male Bodybuilders and Adult Females. (They also work on Young Adult.)
I got the texture used via Google, but I rotated and cropped it to fit the Merfolk meshes and recolored it on my own. I believe it is the texture to a fish-scale style bowl or sculpture of some kind, but I can't be sure as I forgot exactly where I got the image from. Anyway, the base texture I used I rightfully credit to the sculpter. Also, the texture on the tailfins is by Brendabond and is credited to her.
Credit aside, I think it came out pretty well. =3 Hopefully you guys will find this useful! It looks very good in-game, nice and shiny. Though I don't know why exactly merfolk would be this shiny, you just can't fight the extreme powers of intrigue a good shine will invoke. =3 Maybe the merfolk have some ancient secret to a good tail-shine?

I may try and make even shinier recolors of this same texture later. Also, I am open to requests of colors and ages to convert if nessasary. =D So feel free to ask if you want, I love getting feedback.

The colors I have in this file are:

Onyx--
For both genders; It's a mineral-y black color. It's especially handy if you want to make a 'goth' style mer-sim. It's for both genders. It looks fantasic on any skintone for the female, though for the male I forgot to remove the alpha for scales on the chest and arms, so it generally looks better on darker skintones. If requested, I'll make an alpha edit of the male to make it look better on pale skintones.

Paladin--
An almost luminous, pure hue of white. For both genders. It looks great paired with paladin hair, by the way. =3 Again, the female skintone looks good on all tones, but the male looks primarily good on lighter tones. If requested, I'll make an alpha edit of the male to make it look better on dark(brown, pitch black, etc) skintones.

Metallic-- A very shiny silver tone, looking like sheer metal. This is the original color of the texture. It's for both genders. The female looks good with all skintones, though I haven't tested the male on darker skintones, so I don't know if it looks good or not.

Pink--
A sweet, pretty pink hue. Females only, though if requested I can apply the pink to males as well. It looks good on all skintones. I put the pink cancer ribbon under the title in one of the images because that's what the color reminds me of, and I figured it'd be nice to add it for the heck of it. =)

For these to work, you'll need the fantastic meshes by Marvine and Beosboxboy. Be sure to thank them for all their hard work, without them none of this would be possible. =3 Oh, also, I have permission from Beosboxboy to recolor the meshes, and Brendabond have be permission to use her snake texture(which is what I used for the fin). ^^ Thanks you guys! <3
Merman Mesh: http://www.insimenator.net/showthread.php?t=2793
Memaid Mesh: http://www.insimenator.net/showthread.php?t=3503

Terms of Redistribution: Feel free to include it in uploaded sims and lots, though please try to keep them at MTS2. More importantly, please link here to give the proper credit. =3 Also, as always, no expansions required.

Also, please don't ask me to use a format other than rar to upload. Normally I use ZIP, but I have dialup, and these files would have taken a lot longer if I hadn't used rar instead of ZIP. You can download rar very easily, there's even a link to it here at MTS2, and it's completely free and safe. If it wasn't, I wouldn't have it. =3 Plus, you need rar to get the meshes, anyway.