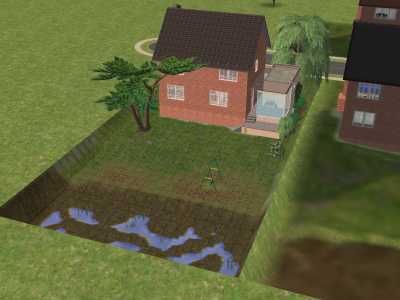 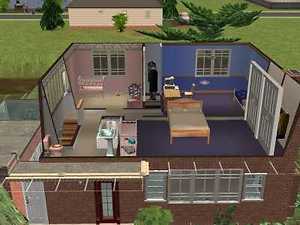 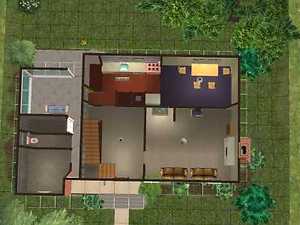 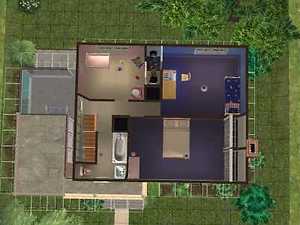 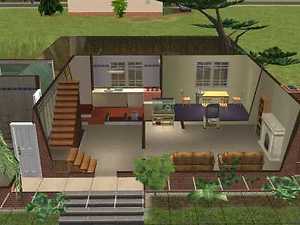 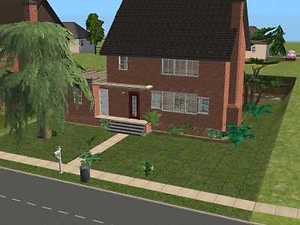 Like my house its fairly well placed on a decent plot of land (2x4) allowing enough room for expansion later, a driveway at the front etc but comes cheap enough for a young couple. (Actually in real life it doesn't any more but that’s life. Fortunately Sims don’t have to deal with inflation!)

Now if you're still reading here is a little more background. This is the fourth version of very my first creation from scratch and is in fact a mirror image of the original skinnied down to save cash. The original was nearly 50k and although the house was more accurate it was too close to the road on too small a plot making it near on impossible to place a driveway at a later date. The second version was nearly the same but I used many custom windows, wallpaper and trim in order to get the look just right. As the upload rules here state I then spent an evening trying to hunt down where I got them from. Annoyingly many of the creators had not included any notes with the items or edited the description of the item they cloned so I began digging out the customs and placing as close as I could get with standard items. Overall it took me about 2 days to get the look and the feel of the house ready for use and another day to prep it for submission! The third version wassubmitted and turned down because in my efforts to lower the costs and trim the customisables I had left the garden looking somewhat bare. Quite wrong for a 40 year old residence obviously and the mods where helpful enough to point that out. This extra detail has added about $2,000 to the cost of the house but really makes a worthwhile difference (imo).

What’s Missing?
Originally I furnished the house just like mine; while the decor is pretty similar to how you see it now (i.e. shabby) I have thinned down on the computers and bookshelves. Sims refuse to climb over furniture to get books and don’t like to rub shoulders as they type. To give you some perspective my own living room is host to a fold away dining table, 3 computers, a bookshelf and a fridge freezer. It just wouldn't fit! Also these houses have a chimney up the middle where an old auger used to sit in the kitchen (the 1x1 boxed off section between the smaller bedrooms), opposite this chimney upstairs is the airing cupboard that I decided to leave closed off for the game version.

There where some custom items that this house just had to have to keep its character and style:

-Mega Plant Pack (all custom plants are from this pack)
by mickyss
http://users.tpg.com.au/mickyss/

-Glass Floor(6) Grey Tint (Couldn't find translucent corrugated plastic so I used this as the closest fit for the lean-to.)
by jennihaze
http://www.modthesims2.com/showthread.php?t=81890

Compatibility
You will need University, Nightlife and Open for Business for this lot.

Ok well that’s about it, I hope you like it. Constructive comments are more than welcome but whatever you think please let me know. As I said at the beginning this is just about my first attempt at a house from scratch so go easy on me ok ;-)