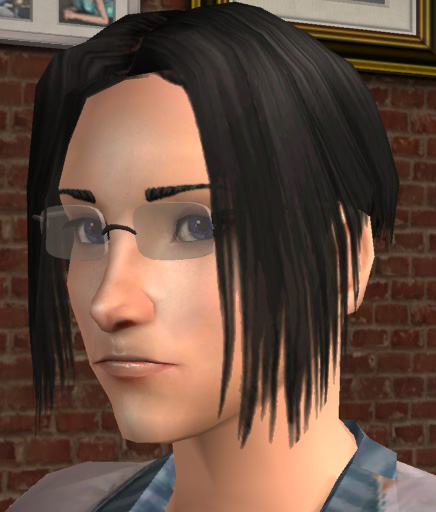 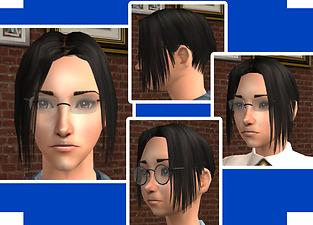 1,030 Thanks  Thanks     75 Favourited
This is a new mesh, and means that it's a brand new self contained object that usually does not require a specific Expansion pack (although this is possible depending on the type). It may have Recolours hosted on MTS - check below the description for more information.
Picked Upload! This is a picked upload! It showcases some of the best talent and creativity available on MTS and in the community.
Kicking off my Bleach Quincy project is Uryuu Ishida's hair. I know I've said to people I don't do hair meshes, but I've made an exception for the Ishidas. Besides, this one didn't involve much effort on my part. I just lengthened the Maxis floppy hair and tucked it behind both ears. The texture is by fanseelamb and the alpha is essentially the same as the one Louis created for Shigure Sohma.

The hair is color-binned, animated, and for child-elder. Elder is not grayed, but there's a silver/gray version under custom hair colors (Ishidas seem to prematurely gray anyway). The length varies slightly by age, child is the shortest, teen is the longest, and I shortened it up a bit again for YA-elder.

Quincy Project in general:
The Ishidas (Uryuu and Ryuuken in particular, but Souken is okay too) are my favorites tied with Urahara, so I'll be putting a little more effort making hair, accessories, and uniforms than they get in the series. I'll be working on them for awhile, but I'll probably throw in a less time consuming project every once and a while to shake things up a bit. As of right now this is what I have planned for them:
- Ryuuken's hair
- Quincy Cross bracelets/necklaces
- Generic Quincy uniform male/female, child-elder
- Ishida specific Quincy uniforms

Mesh Policy:
Re-texture, improve, mutilate, my files as much as you want, just throw out a line of credit and keep it free.

Additional Credits:
I totally would have been still struggling with this without fanseelamb's Fuller Floppy Hair texture and Louis' Shigure Sohma alpha, thanks for their great work!