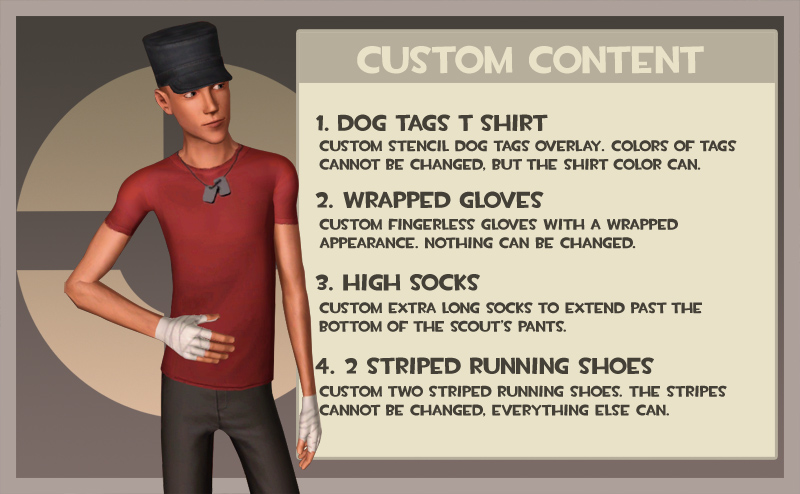 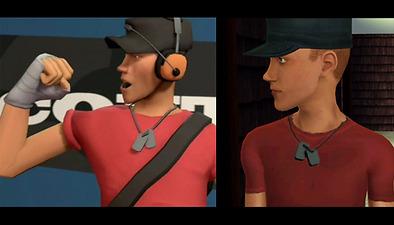 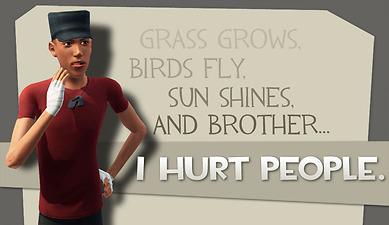 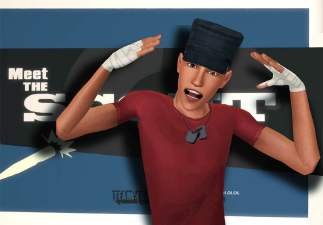 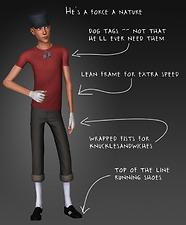 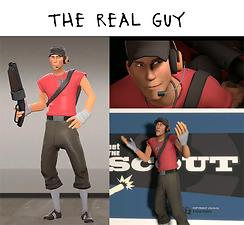 5,775 Downloads Quick download 696 Thanks  Thanks 119 Favourited 99,552 Views
Picked Upload!   This is a picked upload! It showcases some of the best talent and creativity available on MTS and in the community.

Created by amvalvo View Policy / About Me View Downloads Home

Umm... I don’t even know where to start with you. I mean, do you even know who you’re talking to?
Do you have any idea. Any idea who I am? Basically, kind of a big deal. The youngest of eight boys from the south side of Boston, the Scout learned early how to problem solve with his fists. With seven older brothers on his side, fights tended to end before the runt of the litter could maneuver into punching distance, so the Scout trained himself to run. He ran everywhere, all the time, until he could beat his pack of mad dog siblings to the fray. [tf2wiki.net]

This set is everything you need to have your very own scout running around in your neighborhood, batting in skulls. Included is a custom fitted t-shirt with dog tags layered on top so you can easily change your red scout to blu if you so chose, wrapped gloves to make beating on people easier on the knuckles, knee length socks, and custom running shoes for sprinting from place to place. Bonk! Traits: ambitious, athletic, brave, charismatic, daredevil
Notes: The Scout uses Rick & Delphy's CAS Slider Hack , so if you do not have it installed he probably will not look right. He is also seen using HP’s skin replacements and aikea guinea’s default eye replacements, but having those installed is not necessary.

The pants seen on the scout are a store item. [Resort Pants - YA Male bottoms]

Big thanks to Delphy for his CAS Texture Unitool, without which the Scout would not have been possible.

The scout is a class from the game Team Fortress 2 created by Valve. To meet the scout in video, click here.

Ey, is somebody keepin' track of my heads batted in? Boink!

Additional Credits:
Thanks to Valve for making TF2 and all its lovely characters.

For updates on items and extra downloads visit my blog.

Do whatever you want with my stuff. You can include it with sims, edit the items, whatever.
Credit is appreciated, though. :]
Feel free to make a request, but I can't guarantee anything. Your best bet is to request something that is at least similar to anything I've made previously in some aspect, because I'll only make it if it's something I would like to have myself. I don't know how to mesh, and I'm not very good at celebrity sims.

About the TF2 characters: the next one was originally planned to be the Spy, but his mask is proving to be much more difficult than expected. The uploads are going to be coming slower until more tools come out for modding.