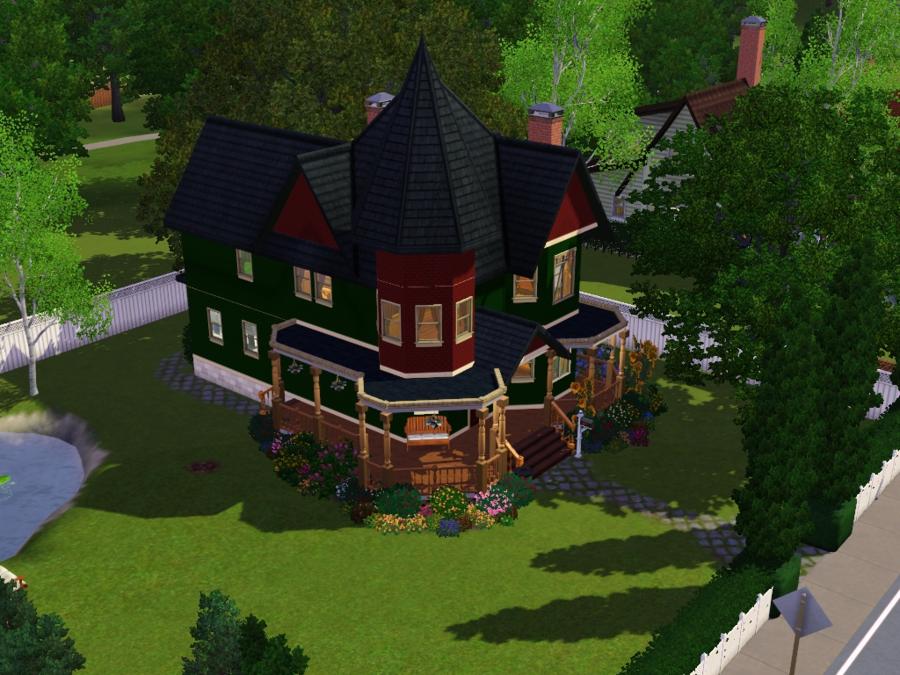 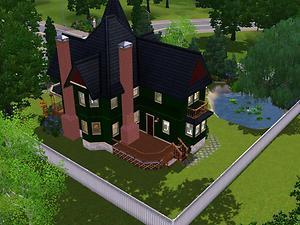 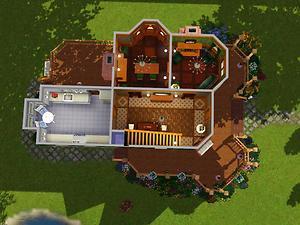 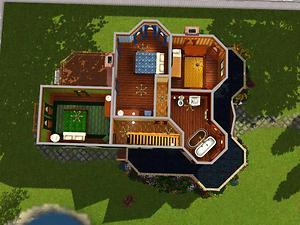 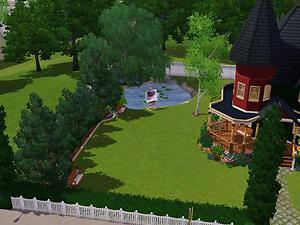 The front facade, showing the porch and gardens.

This house was based extensively (albeit quite loosely) on the Laura Hawkins House, of Hannibal Missouri. What follows is a brief history of the house's real life history.

This house was the final residence of Laura Hawkins, the model for Becky Thatcher in Mark Twain's novel, Tom Sawyer. The house which shows evidence of being at one time a glorious Queen Anne was built in 1897. The untimely death of her husband (Dr. Frazer) left Laura a widow at age 45, and she moved into the house shortly after it was built in 1897 with her son Judge Edward Frazer. Laura Hawkins lived in this house until her death in 1928, at the age of 91.

In the 1940s and 50s, a string of "improvements" were undertaken on the house, which included covering up the original shingles and siding with mint-green asbestos shingles, the addition of a make-shift lean-too porch (no porch was present on the original house), the sale of the house's original fireplace surrounds, and allowing the house to fall into general disrepair. Currently, the house is being restored by an ex-urbanite couple, in addition to the 1895 Chateau-esque next door. (A link to their blog is at the bottom of the page).

The house available for download is not, by any means, an exact re-creation. It is an idealization of what the house might have looked like in those proverbial "good ol' days" of yesteryear, with some minor aesthetic changes.

One major change is, obviously, the addition of a porch. The original house didn't have one until an ugly little one was added in the 50s. In this case, it's necessary to support the octagonal tower, as the lower floor lacks a tower. In addition, various windows have been added or removed in various parts of the house, including the upper story of the front bay and a square bay being added to the kitchen's rear.

When I first built the house some months ago, I was unaware that the real structure does extend back into the space currently occupied by the back porch/patio. However, even with this new knowledge, no changes have been made for the sake of keeping the house proportional, especially since all rooms in the house were arranged using the assumption that nothing was there.

Looking at the opposite side of the house from the back,
showing the dining room bay, the kitchen bay, and back porch.
The real house actually extends back into the space occupied by the back porch.

The house is ideal for Sims who enjoy nature, due to it's large lot. When I first built this lot, I built it with the Chateau-esque on the same lot. The Chateau-esque is now gone, allowing the Laura Hawkins house to have a larger yard with fairly extensive gardens, and even a pond.

Additional Credits:
Raising Laura: A journal of a couple of ex-Seattle urbanites who are restoring two "dying properties" in the picturesque town of Hannibal, Missouri, and (re)learning small town living.