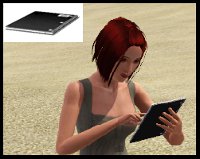 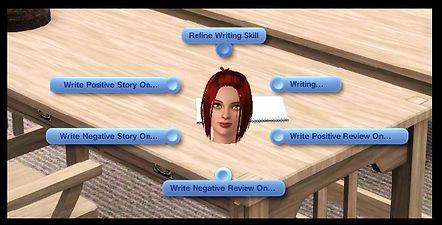 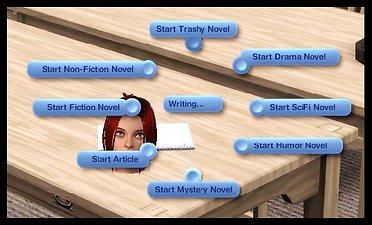 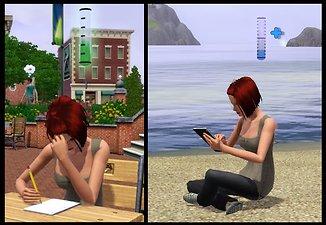 5,242 Thanks  Thanks     1080 Favourited
This is a featured upload! It showcases the best talent and creativity available on MTS and in the community.

updates
2015-01-11 - Updated Commons. Affects Scribbling Pad, DouglasVeiga Dancer Servcer, Moar Interactions and Buy Takeout. If you use any of them, download the updated version, please.
2014-03-15 - Updated to game version 1.67.

scope of this mod
This handy little notepad gives your sims the ability to write novels, reports, etc. the old-fashioned way. You know, moving a thing called pen over a sheet thing called paper? It's way cheaper than a laptop, doesn't need a surface to be used and technophobes can use it without getting the heebie-jeebies. The completion of writing processes is a bit unrealistic, maybe even for the Sims, as the effects show instantly just the same as when using a computer. I thought about changing that behavior so the sim would need to mail the pamphlets first or something. Basically, that would have required coding alternative versions of all the writing processes and storing them in the pad which is a place where that data simply doesn't belong (it belongs to the skill and career data). I couldn't bring myself to accept that, and to be honest: The mod already took enough effort as it is.

usage
The scribbling pad is available for §20 in the buymode catalog under Entertainment -> Hobbies & Skills. That's where the chess tables are available.

The interface and usage is basically the same as for the computer. Of course only the writing interactions are available. translation
Not needed as I only used already localized strings.

possible conflicts
This is a scripting mod and as such the possibility for conflicts with other mods, no matter what kind, is next to non-existant. I can't think of any kind of mod which could possibly interfere with this mod.

deinstallation
It basically goes like this: Remove the package from your mods folder. But before you do that, please make sure that no sim is currently using a Scribbling Pad or you may become unable to load your savegame.

support
I support my mods. I appreciate bug reports. I don't support mods or custom content in general. It's not an issue with a mod if it doesn't even show up in the game.

credits
Special thanks to orangemittens for helping me to figure out the animations stuff and tinting the pad black.

disclaimer
Might lead to a serious case of squished brain. Your game should be safe, though. Use for rocket fuel. Don't use for stomach ailment.

See: Game Help:TS3 CC Basicswiki for a full guide!
Back to download view
464 Comments / Replies (Who?)