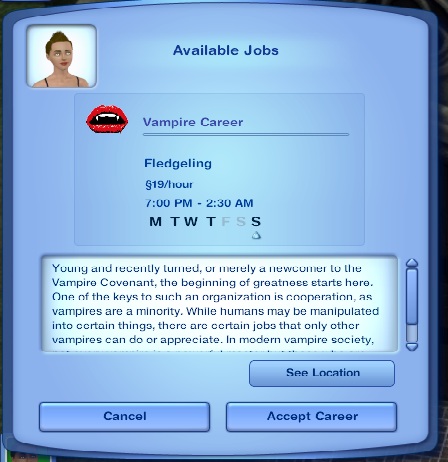 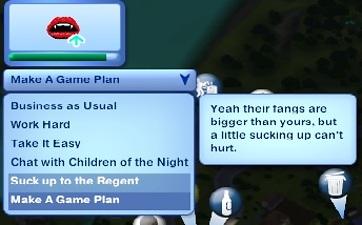 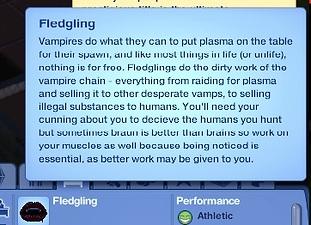 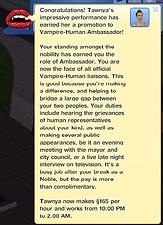 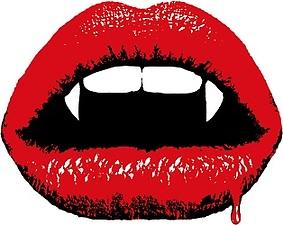 1,036 Thanks  Thanks     246 Favourited
This download is a custom career. This means that you will need the NRaas Careers mod installed in order to use the download in your game.
An absolutely humongous THANKYOU to TessaBee23, whose idea this all was, she made the descriptions, she was brilliant, Thanks Tessa

The most recent version of the NRaas Career mod can be found here. You will need this in order for the career to work. See this tutorial for help on how to create your own custom career.

Another career for Sims 3 - this is one that centers around Vampires being Vampires. Think the Volturi in Twilight, this thing portrays a kind of Vampire Society through which your Sims can rise from being a Fledgling to being the Regent, in the meantime they must keep the Vampire population in check for the good of their kind:

It being for Vampires and Vampires hating sunlight the career occurs mainly in the hours of darkness, though in some of the earlier levels your sims may have to brave the sunlight in order to keep their jobs. The rabbithole is the mausoleum, in the graveyard (you'll need to click on it directly as, I believe it doesn't have a map tag). It centers around the Athletic, Logic and charisma skills. At higher levels you'll also need to befriend your Co-workers (or fellow Children of the Night) and hold meetings NOTE - this can only be done at the business building despite the career Rabbithole being the Mausoleum. The career has all of the usual tones plus one called "make a game plan" and one called "seduce humans", which both allow you to build skills at work.

These are the levels:

Joining Text
Young and recently turned, or merely a newcomer to the Vampire Covenant, the beginning of greatness starts here. One of the keys to such an organization is cooperation, as vampires are a minority. While humans may be manipulated into certain things, there are certain jobs that only other vampires can do or appreciate. As a Fledgling the grottiest ones will belong to you!

1) Fledgling - §19/hour 7pm-2: 30am on S,M,T,W,Th
Vampires do what they can to put plasma on the table for their spawn, and like most things in life (or un-life), nothing is for free. Fledglings do the dirty work of the vampire chain - everything from raiding for plasma and selling it to other desperate vamps, to selling illegal substances to humans. You'll need your cunning about you to deceive the humans you hunt but sometimes brawn is better than brains so work on your muscles as well because being noticed is essential, as better work may be given to you.

2) Blood Runner - §26/hour 7:30pm-2:30am on S,M,T,W,Th,F
Congratulations! Your promotion to Blood Runner gives you slightly higher pay and kinder variations of your job. Many hopefuls find themselves as the petty servants of other vampires as messengers and assistants. Recruitment of more Vampires is an ongoing task that is now yours but stick to the shadows - not only do other lesser vampires know of you, but so do a few slayers now. Keep to your hunting grounds, stay quick on your feet and don't cause too many problems and you'll manage to survive the night.

3) Hopeful - §35/hour 8pm-2:30am on S,M,T,W,Th
The Hopefuls are the vampires who have shown that they can survive the night and all the danger it holds for one such as yourself. It's not a great promotion in the eyes of the covenant, but it's certainly a step in the right direction. As a Hopeful, you've finally figured humans out; they don't need outsmarting they need seducing. You should expect to spend many an hour honing your charisma skills, as you never know when one of the higher-ups may have an assignment for you. In the meantime, keep your wits about you. The Vampire Society is risky and dangerous at the best of times.

4) Protector - §47/hour 8pm-2am S,M,T,Th
The Protector sounds more ambitious than it actually is. They work for Vampire Nobles and the Adjudicators, as well as other high-ranking vampires as footmen, guards and labourers. They make up a lot of the backbone of lesser vampire society, but keep the higher members of the covenant safe and well catered for. At times, they may be called upon by the Adjudicators to make arrests and perform executions of vampire and human alike. It's a messy job. Keep up the good work and you might be lucky enough to get a desk job.

5) Quartermaster - §60/hour 9pm-2am on M,T,W,Th
Civilized vampires who abide by the covenant have their own territory and feeding restrictions. As a Quartermaster, your job is much like a glorified landlord. You should accommodate and equip your fellow kindred, by law of the covenant, and you may just see this one through. Many logistical nightmares will occur over time as you try to allocate hunting grounds and accommodation but be warm and welcoming - or as warm as you can for someone cold blooded - whilst you welcome new vampires to the area and fill them in on the local laws.

6) Siren - §75/hour 9pm-2am on M,T,W,Th
The Sirens of the Vampire community are the ambitious eyes and ears of society. They use gossip, lies and flirtation to acquire wealth as well as prestige. Vampires live a long time, and a lot of that time spent learning about each other's weaknesses and strengths goes a long way. Often, the latest news on laws, events, and the best hunting grounds can be heard from the mouth of a Siren. While this style of career climbing is loved by some and hated by others, it is a necessary step to progress to the level of aristocracy.

7) Vampire Noble - §101/hour 9:30pm-2am on M,T,W,Th
After what feels like centuries of drudge work, you've finally found yourself in a comfortable position. Vampire Nobility has perks. You are well paid, and you have more than enough free time on your hands to indulge yourself in sensual activities, from sins of the flesh to holding lavish parties in your penthouse or estate, but all work and no play makes for a messy society. During working hours you'll be expected to buckle down in meetings and use your swift tongue to quiet your bickering colleagues and underlings. Meanwhile many in this position seek out other moneymaking endeavours. Popular options may include owning a plasma fruit plantation or opening up a black market for ancient relics.

8) Vampire-Human Ambassador - §165/hour 10pm-2am S,M,T,Th
Your standing amongst the nobility has earned you the role of Ambassador. You are now the face of all official Vampire-Human liaisons. This is good because you're making a difference, and helping to bridge a large gap between your two peoples. Your duties include hearing the grievances of human representatives about your kind, as well as making several public appearances, be it an evening meeting with the mayor and city council, or a live late night interview on television. It's a busy job after your break as a Noble, but the pay is more than complimentary.

9) Adjudicator - §315/hour 11pm-2:30am on S,M,T
Few have made it to where you are now. Your ability to handle the politics of both Humans and Vampires has paid off. As one of the four Adjudicators, you will be called upon on occasion to give Counsel to the Regent, and at times, act as a judge in matters that might be too delicate, or too unimportant, to bother the regent. The Adjudicator council is often a governing body for the less important matters of vampire kind, so at this level a lot more is expected of you. A few well-spoken words and enough political ambition and you can find yourself in a Princely position. Adjudicators are the only candidates for Regency, so it pays to make friends with your colleagues.

10) Regent - §360 11pm-3am on M,T,Th,S
After a dispute over loyalties and corruption, the last regent was found unfit to rule, and a review of your achievements put you up for nomination. It was a close call, but you were voted in as Regent. You have thus reached the pinnacle of authority for the Vampire Covenant in your area. As Regent, you are the leader of all Vampires under The Covenant. You hear petitions from your subjects, and make the ultimate decisions that affect your people. This prestigious title is the ultimate symbol of Vampire power and royalty. Your only concerns are assassination and the political infighting of your subordinates, which is a fair trade-off for the wealth and power of your position.

If you need more info, see:
Back to download view
104 Comments / Replies (Who?)