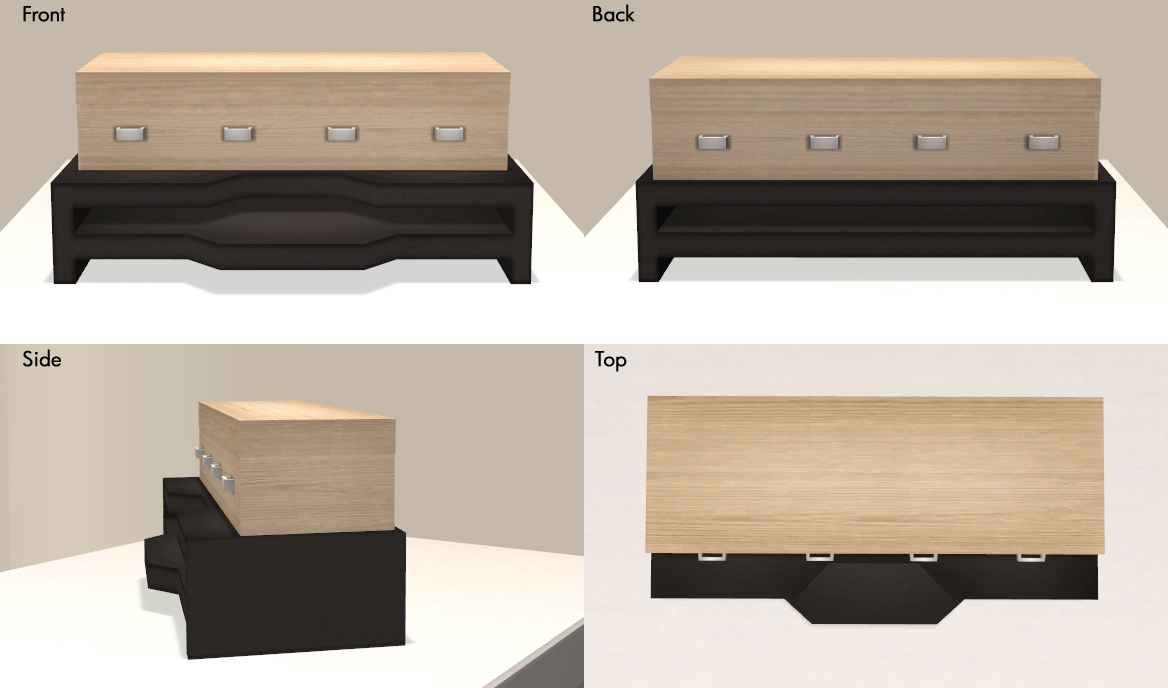 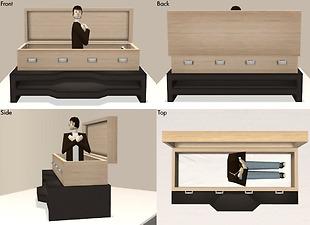 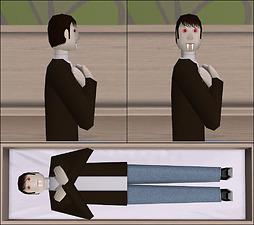 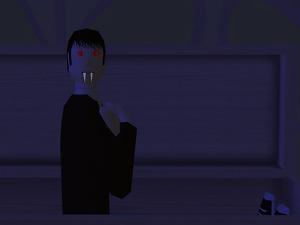 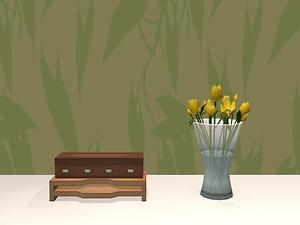 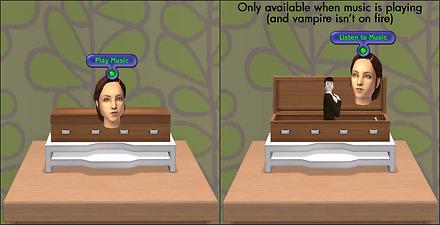 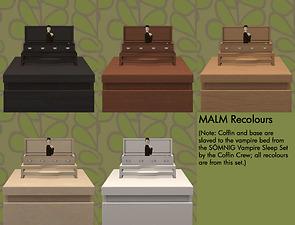 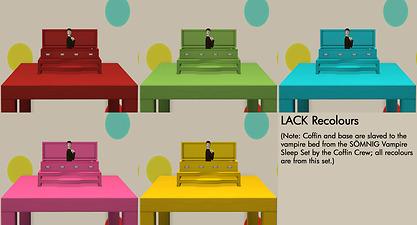 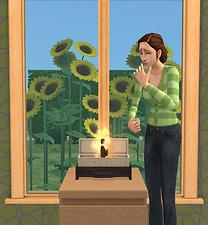 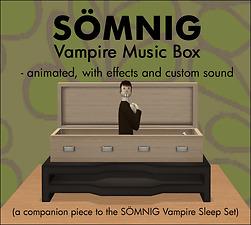 934 Thanks  Thanks     169 Favourited
This is a new mesh, and means that it's a brand new self contained object that usually does not require a specific Expansion pack (although this is possible depending on the type). It may have Recolours hosted on MTS - check below the description for more information. 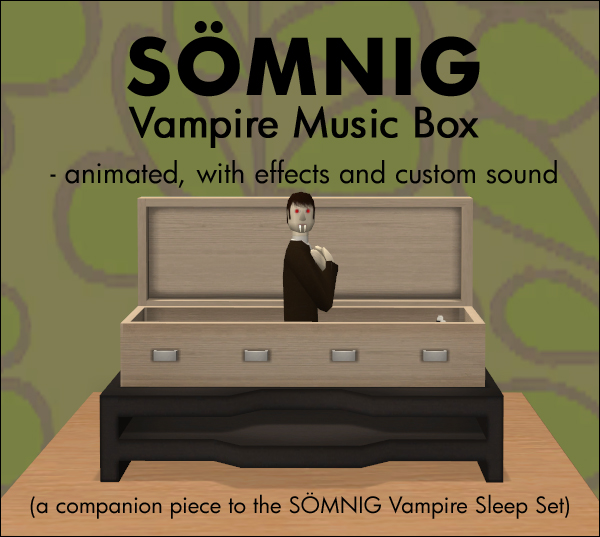 You know, not all vampires are tux-and-cape clad Dracula wannabes who sleep in coffins covered with bling and like to skulk around the neighbourhood, hoping to find some fair maiden naïve enough to invite them in. No, some of them are just regular, Average Joe type vampires; all they want to do is work their night job, go home to the vife and the little bloodsucklings (possibly after sharing an after-work bottle of Tru Blood with the guys), and then take a trip to IKEA to shop for some nice, modern, bling-less vampire beds - and maybe pick up a music box or two. Such as:

This music box is a companion piece to the SÖMNIG Vampire Sleep Set by the Coffin Crew. If you think it looks suspiciously like a miniature version of the vampire bed from this set, then you... are absolutely correct.

Thus, this music box is a perfect match to the rest of the SÖMNIG set - even more so since it's slaved to the vampire bed and will use any and all recolours you have for it, which in turn match the furniture from the IKEA stuff pack.

But the SÖMNIG Vampire Music Box isn't just a miniature vampire bed. Oh no, it's much, much more than that: It's animated and has custom sound!


The music is an excerpt from "Night on the Bare Mountain" by Russian composer Modest Mussorgsky - a well-known favourite of vamps and witches alike. While the music is playing, Sims aged child and up can listen to it* and get a boost in fun, comfort and energy. If you have Free Time installed, the listening Sims will also gain music enthusiasm.

A small caveat, though. Actually, it's a big caveat.

This is a vampire music box, and as we all know, vampires don't do daylight very well. Therefore I strongly suggest you only let your Sims play with this music box after dark, lest bad things might happen. Such as spontaneous mini vampire combustion, that kind of thing. Your Sims really won't like it if that happens. 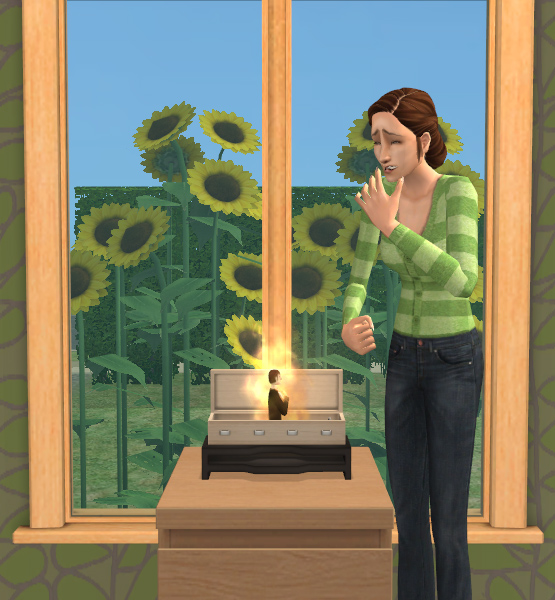 Hair by Dustfinger, cardigan by slkn, skin by me; everything else by Maxis

Nightlife AND the vampire bed from the SÖMNIG Vampire Sleep Set are REQUIRED for this object to work in game!

Also, apparently the earliest EPs don't understand custom sounds (this seems to be a problem for any object with custom sound, not just this one), so to be able to hear the music properly, you need to have OFB or above installed in addition to NL.

(Note that you can still use the music box even if you don't have any EPs higher than NL; the animation and the effects will still play and your Sim can still listen to the music - it's just that you the player won't hear anything.)

The SÖMNIG Vampire Music Box costs $75 and can be found in Decorative > Misc.


Additional Credits:
- First and foremost, the Coffin Crew: Fanseelamb, Honeywell, Mustluvcatz, Leesester, Michelle111 and BoilingOil. This object wouldn't exist if it weren't for this band of merry modders and their vampire sleep set. You rock, everybody!

- Echo - the queen of writing great, easy-to-follow tutorials on things I never could have dreamed of accomplishing otherwise. Making custom BHAVs, animating objects, tying my shoes... I wouldn't know how to do any of these things if it weren't for Echo. (All right, so I was exaggerating about the shoes - but not about the rest.) Thank you for so generously and patiently sharing your knowledge with the community!

- Hexameter and Carrigon for their tutorials on adding custom sounds, without which this music box would just be a box


This object was made from the original vampire bed mesh by Fanseelamb/Honeywell/Leesester, using Milkshape, UV Mapper Pro, SimPE and Photoshop 7.

*Note: When Sims listen to the music they do various idle animations, so if you use this mod, they will simply be nodding their heads until the music stops. Just so you don't think your Sims have gone nuts if that happens.