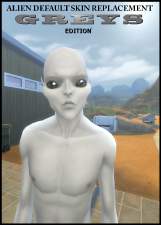 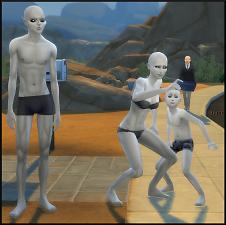 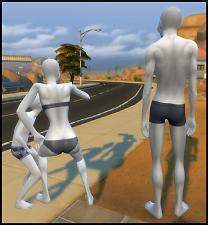 Colorful Aliens infiltrated the human planet, they have technologies that make it possible for them to live undetected among humans. Only in rare encounters the disguise would be lifted. The colored aliens were very friendly towards humans. But then mothership Arcturia entered the horizon. Cloaked between the clouds they slowly eliminated the colored alien visitors. They also stole their disguise technologies and used them for their own kind.

this mod eliminates the colorful aliens and creates a new species called the GREYS.

Create your own story for the disappearance of the friendly colored aliens, or just enjoy aliens that look like the greys that we know from movies or abduction stories.

This mod comes with:


Additional Credits:
Snaitf for discovering how to create non-default skin tones
Qahne for providing the files that were needed for this skin to work
S4PE
GIMP 2.8 for graphics

Archive Information
This is a Maxis Recolour which means that it is a recolour of an item that already exists in your game. Please check the Expansion pack requirements to see which game pack it recolours.
Expansion Packs Needed
Download files Need help with downloading or installing content? Click here!