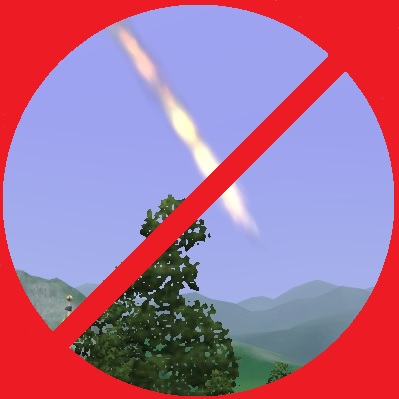 This mod consists of two parts.

The first part introduces a warning system against incoming meteors by launching a loud air raid siren whenever a meteor is detected (a less annoying one in version 1.1). Sims have about half a minute (20 seconds in version 1.1) to seek cover. Of course sims will not seek cover but act like morons waiting for a meteor to hit them (sims gather around the place where the meteor is about to hit, but run away after they notice they're in danger in version 1.1). If your sims are in danger but enjoy their lives too much, you can cancel the meteor interaction from their queue and make them run away. Inactive sims are in a worse position, because without cheats you cannot cancel the interaction and those affected may die after being hit by a meteor...tough luck (inactive sims run away after they notice there's someting wrong, but not all of them may manage to run away before the impact in version 1.1).

The second part consists of three modifications (flavours) which alter the base chance of a meteor strike when a sim is outside or when using a telescope. The chance of being hit by a meteor while using a telescope is always 10% higher. Use only one flavour at a time. You can use those flavours with either the first siren or the one from the 1.1 update.

You can see how the mod works here:
https://www.youtube.com/watch?v=FYQMMgk_NHs

I took inspiration from siawn's Meteor Mods. The creator hasn't updated his mod or logged at MTS for long, so I decided to create a new mod by myself (compatible with latest game versions) and add the warning siren.

Additional Credits:
flyby for his tutorial on how to add custom sounds to the game
jonwil and lenglel for their tutorial and detailed instructions on how to convert MP3 files into SNS to use in game
siawn for the original mod and inspiration