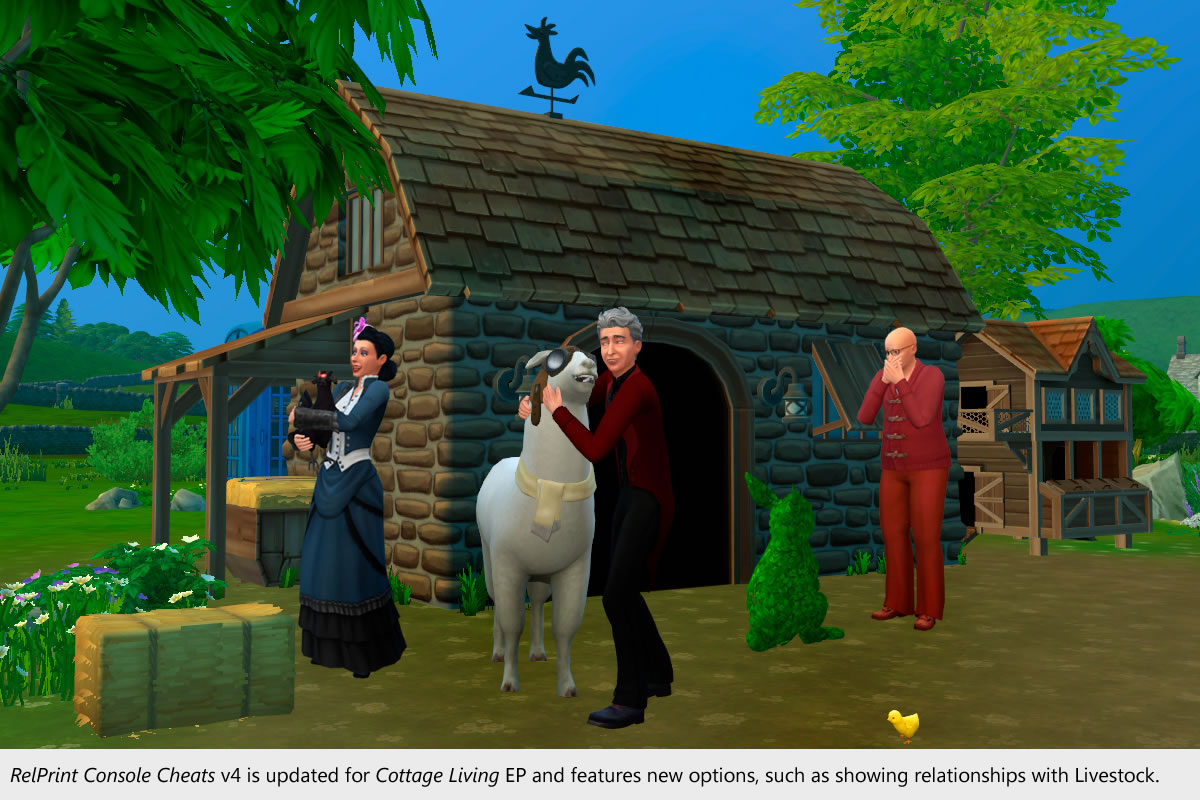 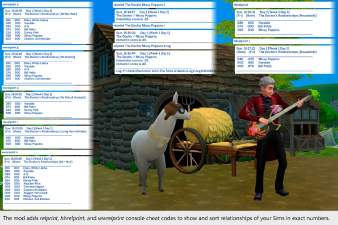 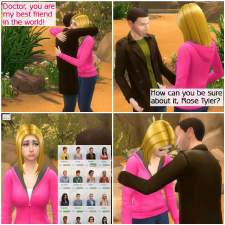 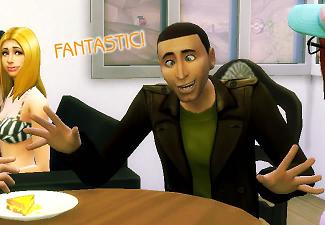 A lot of new features, but first — if you're familiar with previous versions of the mod, please note a change:
now you HAVE to UNZIP the archive and put ts4script file in your /Mods/ folder.

Now that we're all clear...

What's New
Nov 27, 2018: Version 3 of the mod!
Big news, everybody! Not only the mod is updated to 1.47.49 patch, but there's a lot of new features.
But before we start, a quick reminder: put a zip file in your Mods folder (or subfolder within Mods). No need to unzip it. That's the way it has always been, and if you have a problem with the mod, this may be a solution.Thanks to scumbumbo, MissSassy, lemememeringue and to everyone who likes and uses my mod. I am very grateful.
Feel free to PM me about any bugs, I'll try my best to help.

Jan 4, 2018: Version 2 of the mod!Thanks to ohmysims, willisgotgame, Emzydalsvida, Dion and anyone who was waiting for this update. Thanks to everyone who uses the mod. Happy Simming! What Is It For

In Sims games before The Sims 4, your Sims' relationships were automatically sorted in Relationships panel from the most to the least friendly. Several player challenges, like The Bachelor or my very own Thirty-One, actually require this feature to be playable. The Sims 4 has ditched this sorting practice, it's all random order now. My mod puts this feature back in the game in a form of a console cheat.

Download and unzip the relprint_console_v4 archive.
Put relprint_console.ts4script in your Documents\Electronic Arts\The Sims 4\Mods directory.
Since this is a script mod, you have to enable script mods in your game first: Game Options > Other > Script Mods: (toggle on).
Restart the game after that, and you should be good to go.

This mod add three major console cheats to your game: relprint, hhrelprint, and wwrelprint.
To access them, press Shift-Ctrl-C while in Live mode (that opens your in-game console), and type the required cheat.
Here's how they go:


Syntax (what to type): relprint [Sim1] [Sim2] [f|r|b] [log]
Example: relprint John Doe Fannie Mae f
Toggle 1: f for Friendship score, r for Romantic score, or b for Both.
Toggle 2: log to output to log file and console, no toggle (default) to console output only.
Use double quotes around Sim's name if it contains space, or a single hashtag if Sim doesn't have either first or last name at all. Example: "Mayor Whiskers" #.
Type relprint help to get the help message in your game.


HHRelPrint: HouseHold Relationship Print. Shows rels of the active Sim to their household

a [or none] to display All non-null rels (default);
g to exclude Ghosts;
p to exclude Pets & animals;
n to show all rels, including Nulls;
l to show Living non-animals (so no ghosts, animals, or nulls). 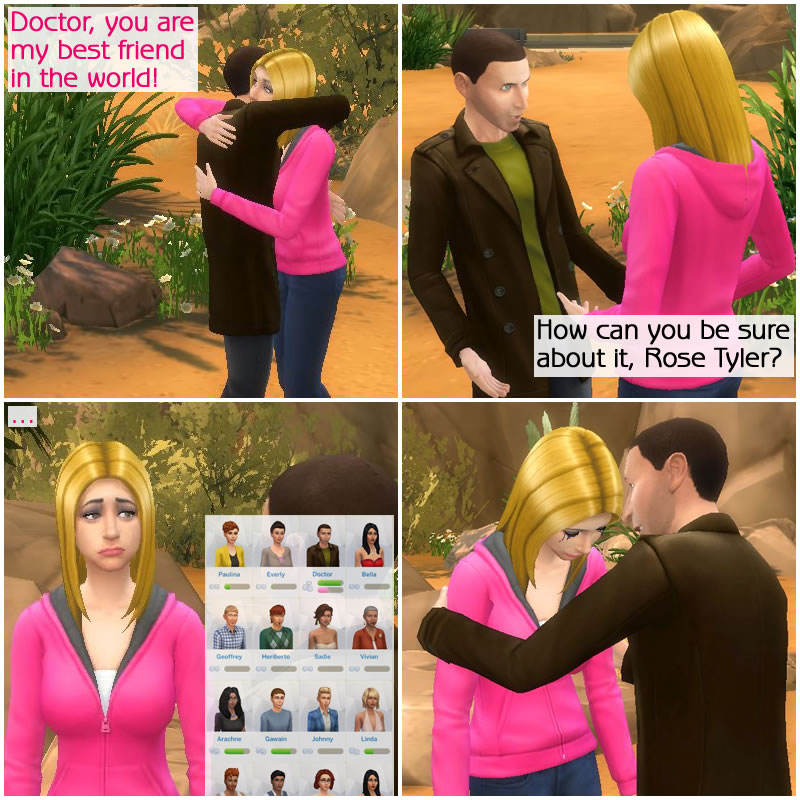 Ever had the same problem as poor Rose here?
Then maybe I have a solution for you!


In Sims games before 2014, it was relatively easy to sort relationships by their range. The game simply did it for us, the leftmost Sim in the Relationships panel being the most friendly and the rightmost Sim being the least friendly towards the active character.

Then The Sims 4 came out, and suddenly the sorting order became less helpful and less obvious. Friends and bypassers and enemies and lovers, all jumbled, all pell-mell... It's like the Relationships panel was put through the blender. I'm not sure what the current sorting order is supposed to be (last talked to, perhaps?), but you surely can't decipher who's your first and second best friend from there.

The worst thing about it is that some challenges like The Bachelor or my very own Thirty-One (which I'm currently playtesting in TS4) require the player to distinguish between relationship levels. The absence of this info renders the challenge virtually unplayable, if you simply can't tell which Sim is winning and which one gets the boot. That is a serious problem.

If you want to save that valuable information to a file, well, now you can. Just use the second toggle: put log at the end of the cheat. It will tell you where the log file is located.
Household Relationship Print cheat is a bit more specific. It displays relationship scores between the active (currently selected) Sim and every other Sim in their active (currently played) household, sorted by the value of that score.
By default, Sims are sorted by their Friendship score towards the active Sim. If you want to sort them by the Romance score, type hhrelprint r instead of hhrelprint. If you want to save this report to a file, type log at the end: hhrelprint log or hhrelprint r log
Worldwide Relationship Print cheat doesn't stop at a household. It studies all existing relationships of a Sim. Besides usual sorting by Friendship or Romance (toggle r) and logging to a file (toggle log), this command has specific filters. Sims these days have a lot of 'null' acquaintances, with Fri and Rom scores both equal to zero. Also, ghosts never go away from the Relationships panel, which is a bit annoying.
That's where those filters come in handy:Each of those can be combined with r toggle (if you want to sort relationships by Romance first) and/or with log toggle (to write the result to file). So, for example, if you want to see living and dead Sims but no pets, sorted by romantic relationships and written down to a file, type wwrelprint p r log
Sometimes a filter can be too strict and bring no results. Sometimes it can be too overwhelming and break the console output limit (about 1,000 characters). In the former case, the mod will advise you to choose another filter; in the latter, it will automatically write data in the log file. The mod is able to recognize and handle these errors, as well as several more. 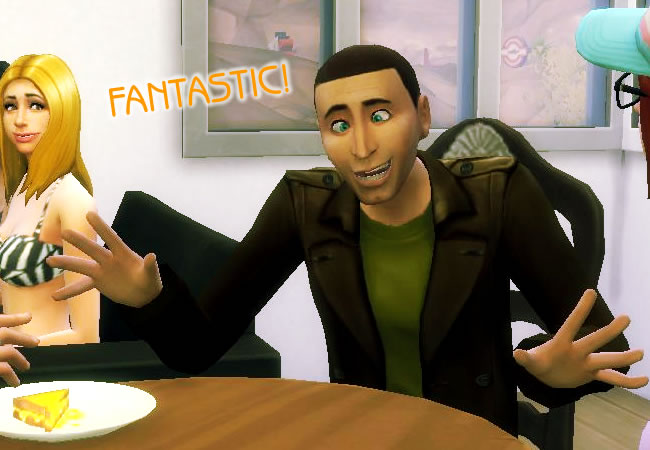 * Note: The Doctor and Rose Tyler are not included.

Also, the cheat will warn you if you input incorrect name or toggle. (No Harold Saxon? Oh, right... that year never was).Household Relationship Print cheat is a bit more specific. It displays relationship scores between the active (currently selected) Sim and every other Sim in their active (currently played) household, sorted by the value of that score.
By default, Sims are sorted by their Friendship score towards the active Sim. If you want to sort them by the Romance score, type hhrelprint r instead of hhrelprint.

Need more information?
Back to download view
49 Comments / Replies (Who?)