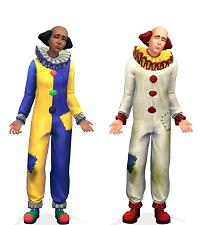 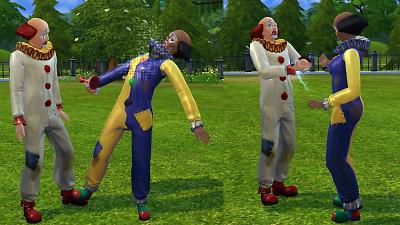 94 Thanks  Thanks     28 Favourited
This is a Maxis Recolour which means that it is a recolour of an item that already exists in your game. Please check the Expansion pack requirements to see which game pack it recolours.
Update

With Patch 1.18.64.1020 May 17th they have apparenlty made some changes to the hair files as stated in the patch notes. I am currently unable to update my files until Sims4Studio updates which I won't suspect happening till Dine Out is released. Hair's also still have switched textures for the Red and Auburn colors and the male grey hair is still miss textured.

With the last patch came the Tragic Clown painting and apparently his clothing as well as his girlfriend's but EA made them hidden in game... not anymore though.

Theses are simply override to make them show in CAS. I did include one texture and that is to override the male's original grey hair texture which was colored wrong. Other then that there are no textures included in theses packages or meshes for that matter. They rely on the textures and meshes already in game.

Other issues
Color swatches for the hairs are out of order and I don't know how to fix that.
On the woman's suit there is a tear on the left calve.

Removing theses files from your mods will not make them disappear from your sims it will only make them hidden in CAS again. For the male's grey hair removing the file will revert the texture to it's original file.

The clown make-up used is from the base game and found under Facepaint.