Transcendental court career, based on Stairway to heaven 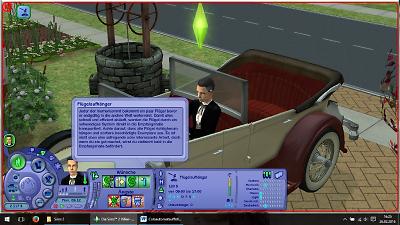 26 Thanks  Thanks     3 Favourited
Transcendental court

Hello.
This time I bring you a somehow eccentric career for your transcendental Sims. It's a little special but I hope that those of you who know the great movie "A matter of life and death" on which the career is vaguely based might enjoy it.

The movie with David Niven and Kim Hunter is from 1946, in America it's known as "Stairway to heaven." It's a little drama, a little comedy, a little fantasy. It's 1945 and the RAF pilot Peter is supposed to die, jumping out of his plane without parachute. But the responsible "conductor" can't find him because of the English fog. As Conductor 71 finds Peter 20 hours later, Peter has fallen in love with the radio operator June and refuses to die. Therefore the conductor's superiors agree to hold a trial. At the same time a friend of June's diagnosed a brain damage and Peter has to be operated. It is left to us whether the Other World and the trial exist in fact or only in Peter's imagination.

However, I decided that for the Sims this Other World is real and now it was opened for them to work there.

1. Wing sorter, Su-Wen, 9am-5pm, $120
Everybody who comes here needs wings before finally going to the Other World. Everything has to work fast and efficient, therefore an elaborate system transports the wings directly to the reception hall. You have to sort out damaged exemplars and ensure that the wings hang in the right direction. It's not an exciting work, nor an interesting one, but if you do it well, you might get promoted to the reception hall.

2. Stairway maintenance, Tue-Sa, 9pm-5am, $340, Requirements: 3 Mechanics, 3 Cleaning, 1 Logic, 1 Body
You're now part of a very important group. You make sure everything runs smooth on the stairway. Polishing the steps till they shine, oiling the creaking ones and then and when removing the moustache that some jokers paint on Plato's statue. Remember to stay in the background, as some people may feel bothered, colliding with the janitor in the exalted moment they reach the top of the stairway.

3. Coke vendor refiller, Tue-Sa, 9pm-5am, $480, Requirements: 4 Mechanics, 4 Cleaning, 2 Logic, 1 Body, 1 Cooking, 1 Friend
The transition goes much more smoothly when the small things are correct, be it a crossword puzzle for the latency or a refreshing bottle of coke. You're now responsible for these small things. Make sure there's something for everybody and the replenishment don't run dry, in the truest sense of the word, as you can become really thirsty after such a long stairway, after all 106 by 106 steps.

4. Receptionist, Su-Thu, 9am-5pm, $790, Requirements: 4 Charisma 2 Friends
Your assignment is it to help the new arrivals to go through the formalities that are necessary to reach the Other World. In general you don't have to await any bigger trouble, just let them sign, tick their names and always smile friendly. Should there be any problem it will be probably about someone who didn't show up and therefore is still out of your jurisdiction. Those who arrive are mostly quite calm, as long as the new intern makes sure there is always enough to drink. How time flies! It's hardly a century that this was your job.

5. Usher, We-Su, 1pm-7pm, $990, Requirements: 5 Logic, 3 Body, 5 Charisma, 2 Friends
Now and then there are events of general interest and the public trials are always well visited. Make sure every of theses thousands and thousands spectators finds his place. It's a demanding task, you should be in top form, physically and mentally, and improve your logistic skills. When trial started you should ensure that the audience stays quiet because should the judge decide to clear the hall, you would have to envisage many extra hours or rather extra years.

6. Conductor, Su-Thu, 8am-4pm, $1480, Requirements: 1 Cooking, 8 Charisma, 3 Creativity, 3 Friends
You now have the very important task to find those, whose time on earth is up and bring them to the Other World. Most people accompany you gladly but some try to refuse out of spite or fear, and need to be convinced, so work on your charisma. Also, you should make sure that you are dressed correctly, as weather can be crazy in some regions on earth. You don't want to miss a client while complaining about your cold feet, do you?

7. Head of the reception hall, Su-Thu, 8am-5pm, $1770, Requirements: 5 Mechanics, 5 Cleaning, 7 Logic, 4 Friends
Everything runs together at you. You're responsible for the whole reception hall and all associated departments. You know about everything, the how and the why, or at least you should. Mistakes are very seldom but when they happen they can raise a lot of dust. Your superiors trust in you that you know what to do then. But don't worry, most of the time you initial the lists of the receptionists, approve the conductors' timetables and sign the delivery notes for the next coke crates.

8. Counsel of Prosecution, We-Su, 1pm-7pm, $1810, Requirements: 9 Logic, 9 Charisma, 3 Creativity, 4 Friends
Sometimes somebody takes the view that he has the right to stay on earth longer than designated. In very rare cases is the situation as complicated that only the High Council can decide. Then it's your task to represent the laws of the universe. Make sure that the order endures and convince the jury with logic and passion, so that there raise no precedents. Consequences could be catastrophic should the selfish wishes of individuals arise above the eternal order.

9. Defence Counsel, We-Su, 1pm-7pm, $1815, Requirements: 9 Logic, 10 Charisma, 7 Creativity, 5 Friends
You decided to work as a defence counsel from now on. The system is important but the individual has his rights, too. It's about persons not just cases. You'll have to strain even more from now on, as the counsel of prosecution has more logic arguments in general. Appeal to the feelings of the jury members because there's one thing that is stronger than laws and order and that is love. Also never forget the difference between law and justice.

10. Judge, We-Su, 3pm-7pm, $2105, Requirements: 10 Logic, 10 Charisma, 10 Creativity, 6 Friends
You were called to the judgeship. Your most important task is to lead the trial and stay impartial. Remind the jury of their duty and smooth down differences between the counsels. When the time for the rendition is there, a little generosity might be not too bad. If you ever have doubts, ask yourself what Him would do, you know, your highest superior. Apart from that trust that everything develops as it should. What seems like a disturbance of order might as well be part of a bigger plan.


The career is available in German and English. I'd be happy about any comment.