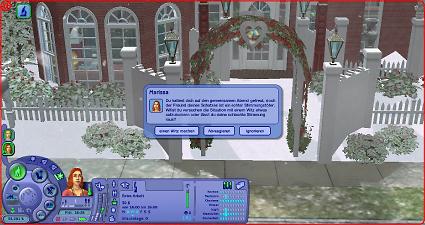 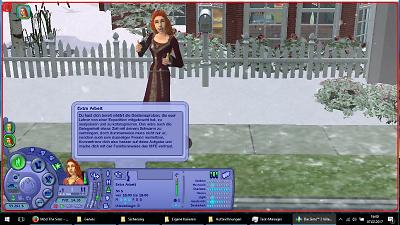 21 Thanks  Thanks     2 Favourited
Two teen careers, in German and English, with chance cards, based on Wicked Science

edit: I fixed the icons for all my careers. Thanks to lientebollemeis for showing me how.

Hello dear simmers. I was positively surprised that there were actually some people who showed interest in my Stairway to heaven career, so I thought I could try and share another eccentric career with you.

It is based on the television series Wicked Science, a German-Australian coproduction. It's about two students, Tobi and Elizabeth, who by accident become geniuses in natural sciences. They both have brainwaves which result in impressive though sometimes uncontrollable inventions. While Tobi wants to help others and ultimately become normal again, Elizabeth uses her new powers to her own advantage and to punish her enemies, which Tobi has to fix.

So I bring you actually two careers, one based on Tobi, one based on Elizabeth. Although I tried to write both careers in a way that Sims of both genders can choose either of them, they may probably fit a little better if your Tobi is actually a boy and your Elizabeth a girl.
Also I tried to be as objective as possible but my texts will probably show you nevertheless, that I'm a hopeless Tobi-Elizabeth-shipper, which is why I totally ignored Tobi's girlfriends.

Both careers are available in German and English and have chance cards for all levels. They have unique GUIDs, won't overwrite any of the standard careers and work with all Eps.

I hope you have fun with my work. Let me know what you think.

1. Extra work, Tue-Thu, 4pm-7pm, $30
You volunteered to analyse and categorize the rock samples your teacher brought back from an expedition. It could be a good opportunity to have some alone time with your crush, but stupidly he's not the only one who has detention but arrived with his gormless friend. It would probably be best to focus on your task and acquaint yourself with the mechanics of the MFE.

2. Genius, Mo-Tue + Thu-Sa, 4pm-7pm, $85, Requirements: 3 Mechanics, 3 Logic, 3 Creativity
You don't remember what exactly happened that night, but since then you have these flashes and the irresistible urge to implement your ideas at once. Physical, chemical, and biological coherences -- you figure them out in a second, and your new powers enable you to invent the most amazing things, be it the shrinking ray, the truth serum, or even the reality manipulator. Your crush has the same powers, another reason why you should be together. Until he's ready to accept this, you can use your gift to consolidate your power -- in secret, of course.

3. Genius, Mo-Tue + Thu-Sa, 4pm-7pm, $135, Requirements: 4 Mechanics, 4 Logic, 4 Creativity, 1 Cooking, 2 Friends
Finally, you know the mechanism of how you became geniuses! A magnetic field analyser and a prehistoric stone, probably a meteor, came together to do the job; but something seems to be missing, a key or some order you have to type into the MFE. Your favourite foe seems to possess this key and with his annoying habit of crossing your plans, he may actually try to take the gift from you! Otherwise, you still hope that he finally realises that you two are meant to be.

1. Detention, Tue-Thu, 4pm-7pm, $0
One stupid remark too many, and your teacher gave you detention! Together with your buddy, you have to clean the amphibian tank. As if this weren't bad enough, the teacher's pet will be there to analyse and categorize the rock samples your teacher brought from an expedition. She's actually quite nice, only a little too pushy concerning her affection towards you.

2. Genius, Mo-Tue + Thu-Sa, 4pm-7pm, $85, Requirements: 3 Mechanics, 3 Cleaning, 3 Creativity
You don't remember what exactly happened that night, but since then you have these flashes and the irresistible urge to implement your ideas at once. Physical, chemical and biological coherences -- you figure them out in a second and your new powers enable you to invent the most amazing things, be it the cloned dinosaur, the invisibility spray, or even the time portal. Your classmate has the same powers, which is problematic, because unlike you she has no scruples against using them to her own advantage. Try to control her and be careful that your powers stay a secret. You don't want to end in a government laboratory, do you?

3. Genius, Mo-Tue + Thu-Sa, 4pm-7pm, $135, Requirements: 4 Mechanics, 4 Logic, 4 Creativity, 1 Cooking, 2 Friends
Finally, you know how you became geniuses: the combination of a magnetic field analyser, a prehistoric stone, probably a meteor, and a frog hopping over the keyboard. Using probability theory and an extensive testing series, it wasn't a big problem finding out which orders the frog was "entering". Now you have everything you need to control the gift. You want to be normal again, but you can't give up your genius as long as your friend/foe is still active. It will be not easy to defeat her as she was very cunning even before the accident.

Level 1
You were really looking forward to your joint evening, but the buddy of your crush is a mood-killer unparalleled. Do you want to try to ease the situation with a joke or do you let out your bad mood?

Choice A: Make a joke
Good:
The joke wasn't exactly a big laugh, but you were able to charm a little smile from your crush and he seems to appreciate that you tried. You win a charisma point.
Bad:
Jokes were never your strong suit and the absence of any reaction makes the evening even more uncomfortable. You lose a charisma point.

Choice B: Blow off steam
Good:
This idiot actually thinks he can clean the tank faster by sucking in this gross water. You're just about to tell him what a stupid idea this is, but he already swallowed some of it and runs off. You cover up the MFE so that no water gets into the cable system, earning a mechanics point.
Bad:
You ask your crush why he's wasting time with this idiot but he reacts very defensively. You lose a charisma point.


Level 2
Your opposition seems to tinker with time travel and you should find out why. Do you try to hack his computer or do you use the teleporter to search his bungalow?

Choice A: Hack
Good:
So, that's what he's planning! He's trying to find out how you two became geniuses. At least you're warned now and can prepare for eventual attacks.
Bad:
You try to hack his system but he owns a very effective firewall and recognizes your attack at once. You two have a downright battle until suddenly your computer is dead. You lose a mechanics point.

Choice B: Teleporter
Good:
You beam to the bungalow and realize that the time portal is already disassembled. However, you use the opportunity to cast a glance at some of your honey's other inventions, earning a mechanics point.
Bad:
You try to beam to the bungalow, but your crush was prepared and manipulated your teleporter. You materialise one meter above the bay and have to walk home soaking wet, losing a cleaning point.


Level 3
He has everything he needs to destroy you: the stone, the MFE, and the key. Do you want to send your muscle with some of your more dangerous inventions to steal the MFE, or do you choose a more subtle way?

Choice A: Send the muscle
Good:
Your muscly mook is anything but a brainiac, but he's quite good for the rough work. He brings you the MFE and you earn a logic point, because the danger is banished.
Bad:
It was not good idea to send this brainless bruiser with your inventions. His attempts to be stealthy only make him more noticeable, and you have to invest a lot of effort and a logic point to camouflage his indiscretion.

Level 1
Your classmate once more tries to throw herself at you. Do you want to tell her point-blank that she has no chance, or do you prefer a more cautious way?

Choice A: Clear answer
Good:
She actually wants to persuade you that you deserve better company than your friend -- meaning herself, of course. You tell her point-blank what you think of her and earn a charisma point for standing with your friend.
Bad:
You tell her point-blank that she has no chance. When you see how hurt she is, however, you feel guilty, losing a charisma point.


Level 2
You learn by chance that your teacher installed a surveillance cam in the laboratory after several break-ins. Realising that your friend/foe has been recorded, you're faced with a difficult choice. Do you help her to steal the tape before your teacher sees it, or do you let her get caught?

Choice A: Help
Good:
Even though you don't like to admit it, you don't want anything bad happen to her. Also, it would mean a risk to you if she were caught. Together you manage to steal the tape at the very last second, earning a logic point.
Bad:
Her capture would also mean a risk to you, so you have no choice but to help her. At the very last second you manage to steal the tape. However, you can't suppress the feeling that you lost a one-time opportunity and a logic point.

Choice B: Don't help
Good:
You don't interfere and your classmate has some explaining to do. Although she manages to keep her powers secret somehow she is now under permanent surveillance, which means a major setback for her experiments. You earn a logic point.
Bad:
You don't interfere and want to lean back, watching how she manages to get out of the affair. Instead you listen as she incriminates you -- and she even doesn't have to lie to do it! Now you need to join forces to somehow fix the situation, losing two logic points.

Level 3
You made it. She's trapped in your tractor beam and all you have to do to make both of you normal again is to type the last sequence into the MFE. But while you're busy, she asks you if you really want to destroy her and you hesitate. She starts crying, begging you not to hurt her, and you don't know any more if you're doing the right thing.


Many thanks to Peni Griffin for spelling, grammar, and term corrections.

Additional Credits: SimPE Bidou's careers editor
Everybody who was working on Wicked Science