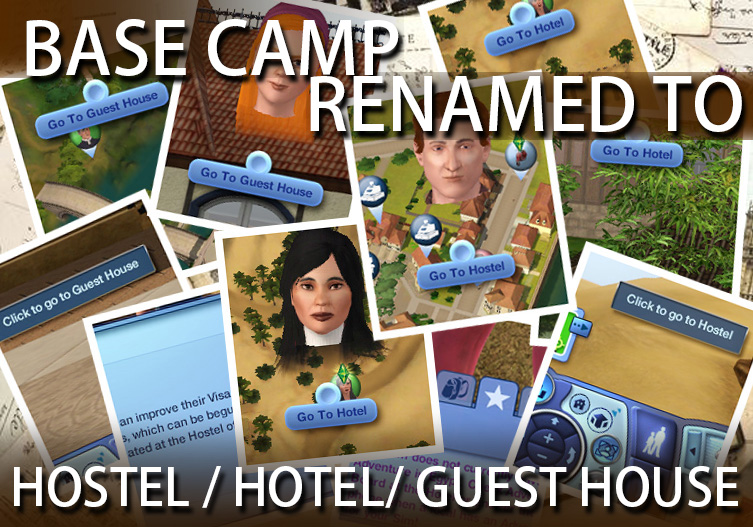 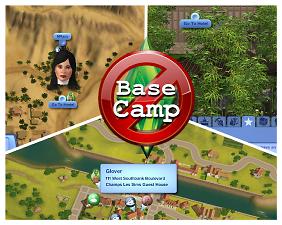 I no longer working for mod and not going to visit MTS, so I won't do translation & further support of my mod & CC on MTS.

If you wish to make own translation, try this tutorial http://modthesims.info/t/488489

English, Chinese, Dutch only. Other than those, this renamed mod is not working (Base Camp will stay Base Camp in each language).


Hey you, yes you who are sitting in front of PC right now. Do you dislike Base Camp, the name EA gave to a place your Sims staying in vacation destination spots?

So I made mods to replace the name 'Base Camp' to something that sounds more make sense that fits for tourist accommodation lot in vacation worlds.
In three versions:
- Hostel
- Hotel
- Guest House

Choose which one you like the best. Only one version that works in the game.

What is this mod and what it is for?

This mod is STBL override. It will replace all Base Camp name in every description in World Adventures EP vacation worlds, no matter if it is in Shang Simla, Al Simhara, Champs Les Sims, or other custom vacation worlds. It will only replace the text, it will not give more additional Hostel / Hotel / Guest House functionality mod.

Yes, it does. It will be replaced with Hostel or Hotel or Guest House, depends which version you install. This mod affects all text that have Base Camp name, such as Base Camp lot, Base Camp address, description in adventure story, tutorial, etc. If you don't like Hostel / Hotel / Guest House replacement name for 'Base Camp' tents in Al Simhara, then do not install this mod or delete this mod if the mod exists in Packages folder.

This mod is purely optional and flexible. You can install this mod if you want Shang Simla and Champs Les Sims tourist accommodation lot with Hostel / Hotel / Guest House name then quit the game, delete this mod before you load the game if you want Al Simhara keeping the Base Camp name, for example. This mod also useful for example, custom tourist accommodation lot in building Hotel / Hostel / Guest House-like form you created for Al Simhara and you don't like the default Base Camp name for that custom lot you created.

Requires World Adventures EP as the EP contains vacation worlds with 'Base Camp' as the name of tourist accommodation place in vacation worlds.
This mod was made with patch 1.67.2.024037.

INSTALL ONLY ONE VERSION!
Whether it is Hostel or Hostel or Guest House, you can only choose one!! Because this mod is intended to override/replacing the existing name with just one replacement name with specific instance number. Installing more than one version may cause instance number conflict of these mods that may cause harm to your game.
I'm not responsible for any explosion your PC had if you installed two or three versions altogether.


How to install
Extract rar to Mods/Package folder


Additional Credits: S3PE Chann for giving useful hint to change the instance number of STBL. Without his help, this mod would not be possibly made.
Hex converter online, to help the hex calculation.

See: Game Help:TS3 CC Basicswiki for a full guide!
Back to download view
2 Comments / Replies (Who?)