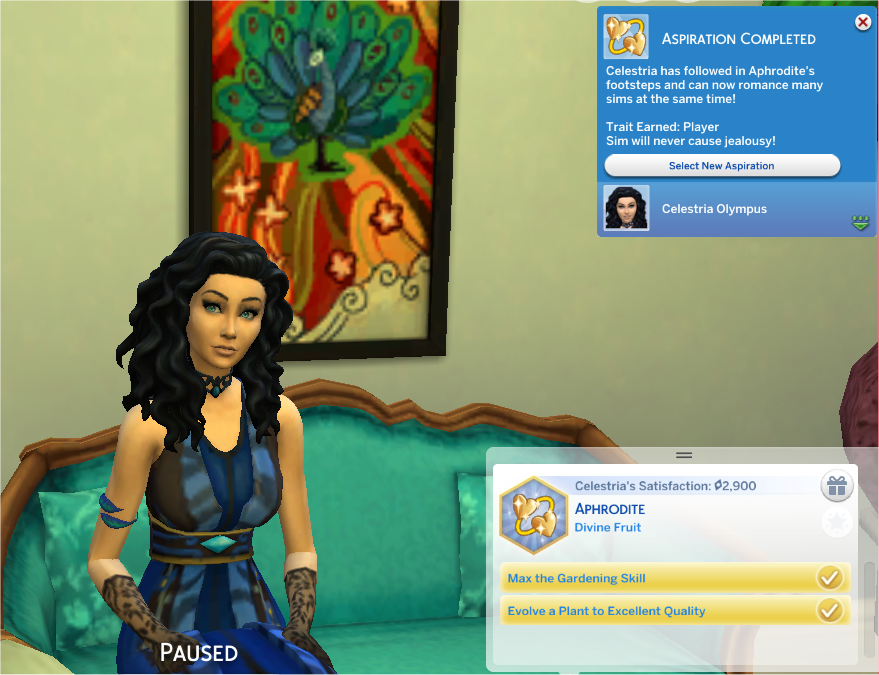 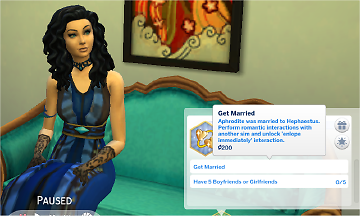 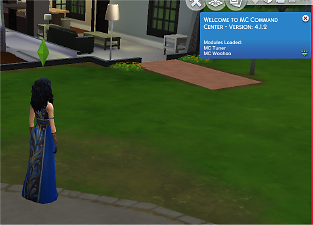 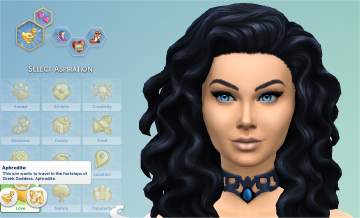 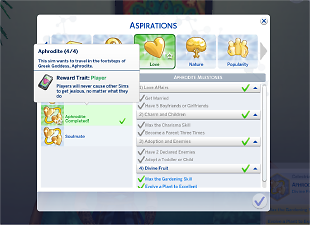 Are your sims ready to follow in Greek Goddess Aphrodite's Footsteps? This custom aspiration has four levels, each with two objectives, that focus on the taking your sim on a journey through the most well known myths regarding Aphrodite.

This aspiration works with my custom Aphrodite trait, though it is NOT required to play. It was developed to add even more game play to the trait and my plan is to create 7 Greek Traits, 7 Aspiration and run a 7 Gen Legacy challenge.

LEVEL 1 - Love Affair
Objective 1: Get Married.
Objective 2: Have 5 Boyfriends or Girlfriends
THE MYTHS: Aphrodite was forced to marry Hephaestus by Zeus as she was so beautiful, he was worried a war would start among the gods. Hephaestus was very ugly. Aphrodite took many lovers whilst married, most famously Ares.

LEVEL 2 - Charm and Children
Objective 1: Max the Charisma Skill
Objective 2: Become a Parent Three Times
THE MYTHS: Aphrodite is always portrayed as being exceptionally beautiful and charming, she is the Goddess of Love, Beauty and Fertility. Everyone was drawn to her. She had many children, more than three, at least 8, however the three most well known are Eros (Cupid), Hermaphroditus and Harmonia.

LEVEL 3 - Enemies and Adoption
Objective 1: Have Two Declared Enemies
Objective 2: Adopt a child
THE MYTHS: Despite Aphrodite's common portrayal as beautiful and gentle, if she was crossed, she was a very angry Goddess and prone to jealousy! She killed Hippolytos when he began to worship Psyche instead of her. Aphrodite was very close to her son Eros and when Eros fell in love with Psyche, Aphrodite was so jealous she persecuted Psyche for years, before eventually growing to accept her.
When Aphrodite witnessed the birth of Adonis, she fell in love with him and became his surrogate mother,

Level 4 - Divine Fruit
Objective 1: Max the Gardening Skill
Objective 2: Evolve a Plant to Excellent Quality
THE MYTH: Perhaps the most famous myth of all and saved for last. Aphrodite, Athena and Hera all gave a golden apple to Paris of Troy. He was to decide who was the fairest of the three Goddesses. Each Goddess made him a promise of different things if he chose her. In the end, Paris chose Aphrodite, who had promised him the most beautiful mortal woman in the world. This was Helen of Sparta who was rather unfortunately already married to King Menelaus of Sparta. This led to the famous Trojan War.

Download the zip package, unpack with WinZIP or Winrar, place the package into your mods folder.

This is a pure mod, using unique xml files and so should not conflict with any other mods. I use MCCC and have played the trait through with no last exceptions.

This aspiration will work with just base game and/or all expansion packs.