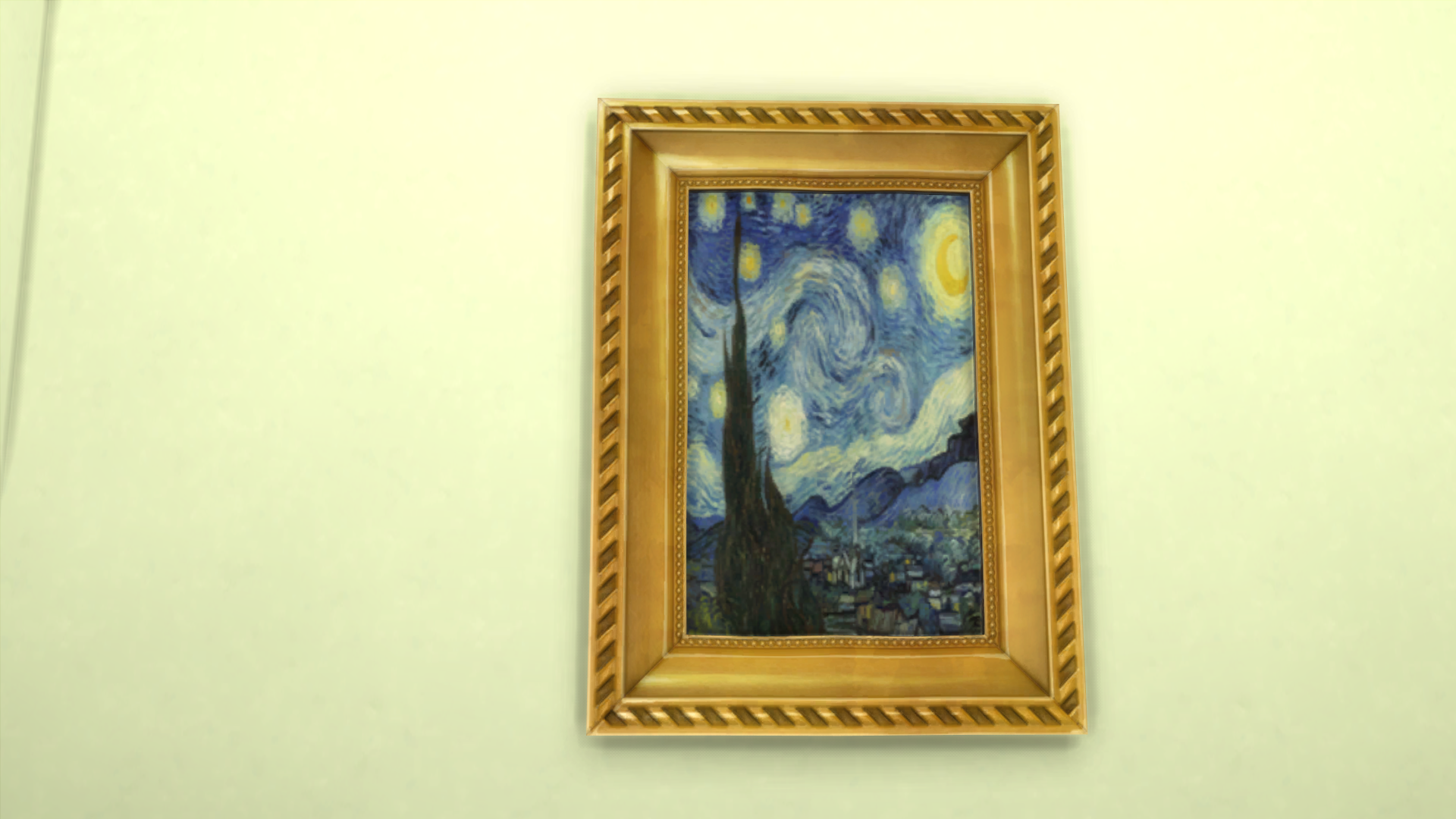 120 Thanks  Thanks     29 Favourited
This is a Maxis Recolour which means that it is a recolour of an item that already exists in your game. Please check the Expansion pack requirements to see which game pack it recolours.
This is painting has been on my mind for a while and boy did I have trouble getting it to work. After many hours on tutorials and many foul words spewed at my computer I have succeeded.

Without further ado, I present...

A description of Van Gogh's work -
One of the most recognizable paintings in the world. The Starry Night depicts the view from the windows of Dutch post-impressionist Vincent Van Gogh's asylum room at Saint-Paul-de-Mausole asylum, just before sunrise. He voluntarily committed himself to the asylum in May of 1889 which marked a prolific period in which he produced some of his most famous works. Asylum staff did not allow Van Gogh his painting supplies in his bedroom but they did allow him supplies in his second room (must be nice to be wealthy). It is believed that he sketched this then transferred it to canvas in his second room art studio.

The moon is stylized and the brightest star just to the viewer's right of the cypress tree is, most likely, Venus. The village in the painting was not visible from Van Gogh's room and is believed to be based on a separate sketch made from a hillside above Saint-Remy
Oil on Canvas
73.7cm x 92.1cm
Located in Museum of Modern Art, New York City, NY, USA

Art historian Albert Boime wrote a wonderful article about this painting's history and meaning in the December 1984 issue of Arts History magazine. His article is well worth a read if you like art, or if Wikipedia doesn't have enough information for you.

A description of this painting in-game -

which is a lot of money but it has an environment score of 10 so one of these on your wall gives you the +3 Beautifully Decorated Moodlet. If that isn't enough reason, just use cheat codes. "But I hate using cheats" you say. If you're that against using cheats there's always the "hard work" option

This is base-game compatible and is based on a base-game object recolor so the poly count isn't high. You'll find in in the Buy Mode catalog, under Decorative, then Paintings & Posters

I hope you all enjoy this painting as much as I do.

Additional Credits:
Sims 4 Studio - http://sims4studio.com/thread/1523/...g-sims-4-studio - for allowing recolors like this in the first place

Wikipedia - https://en.wikipedia.org/wiki/The_S...NaifehSmith2011 - for hosting a quality photo: for me to steal

Atos - for the inspiration to create this painting. Check out his uber-expensive luxury paintings.