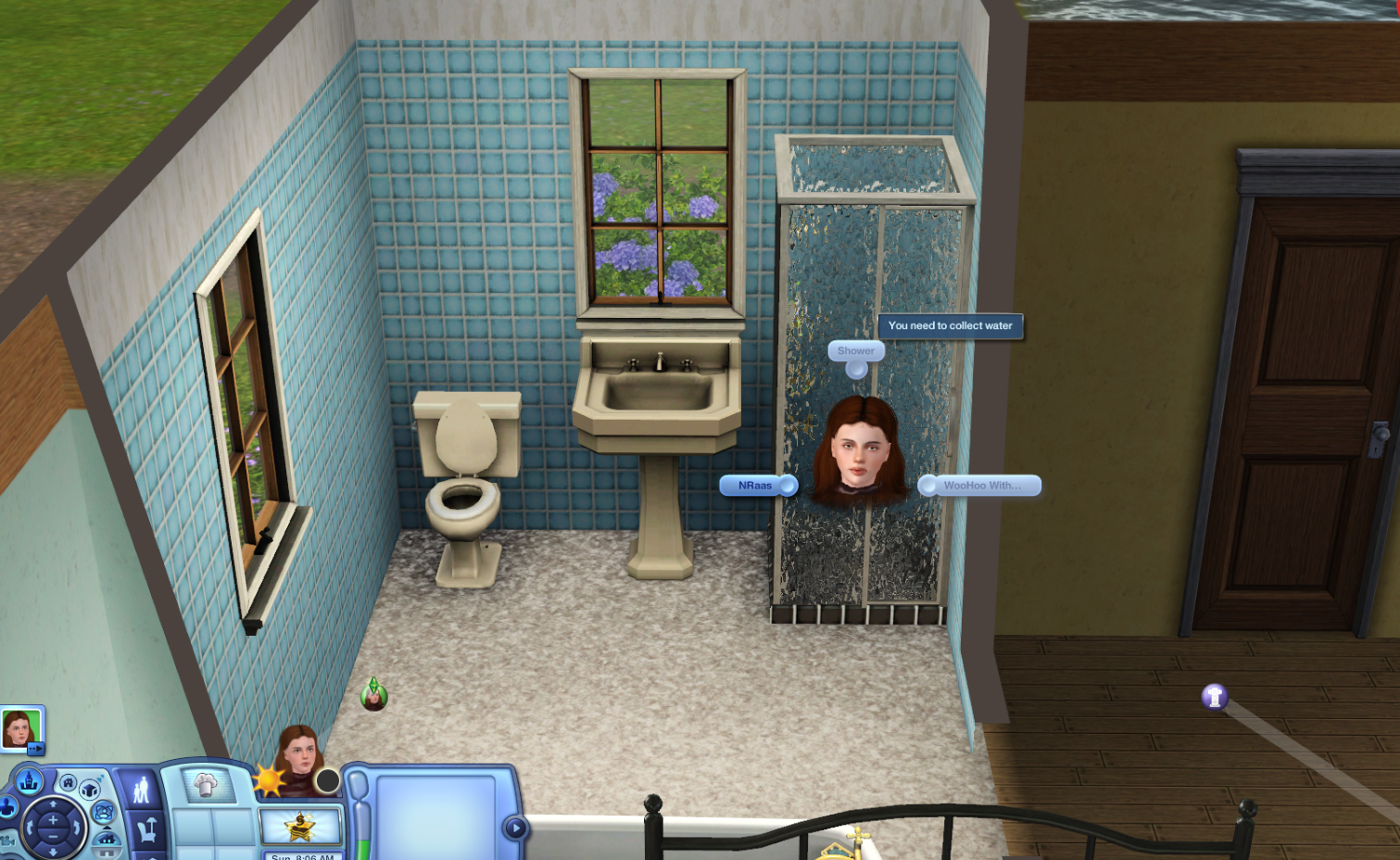 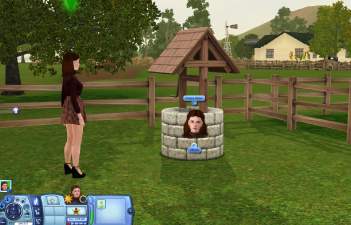 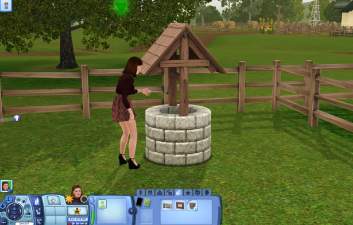 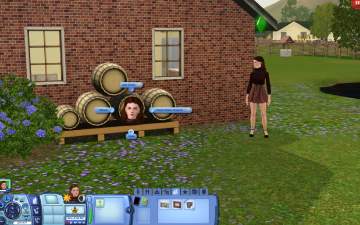 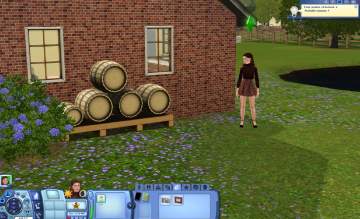 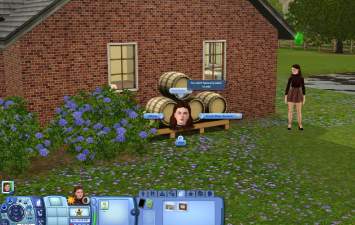 I didn't realise this before, but reloading an off-grid save made it so the custom versions of the plumbing interactions were no longer being used (unless you quit to main menu and reload), and buckets were not staying in the barrel stack through quitting and reloading the save.
Both of these things have been fixed thanks to Battery.
And in fact, objects that were placed pre-mod install do not need to be replaced to get the new interactions anymore.
i'm sorry that I didn't catch this before, but hopefully it should now be sorted


I've done some stuff.
There are now two versions:
FunctioningWellAll - works in the same way as the previous version in that once installed, all objects with interactions affected by the mod require buckets of water, whether on your home lot or off.
FunctioningWellSpecified - Only lots with a well or barrel stack on it will be affected - The interaction definitions are replaced same as usual, but when checking for/using water, if the lot the object is on doesn't have a well or stack of barrels, it will be classed as "on-grid"(?or something?) and buckets of water aren't required or used up.

For both versions, it's still only the active household that is affected, non-active sims can still use all plumbing stuff without buckets of water.
Please note: If you have the Specified version of the mod, objects that don't require the buckets, because the lot is on-grid, still have the custom interactions, and so if you are uninstalling, you need to make sure those objects are not being used when the game is saved - It's a good idea to reset your town.


I've also added some things to both versions:
The All-in-One-Bathrooms are now off grid.
The "Put In Inventory" interaction has been added to the buckets, so you can pick them up off the ground.

Aaaand I think that's it

What is this "Functioning Well" you speak of?
It's a well! That functions!
The idea of this mod is to basically make life more difficult for your sims - Instead of being able to just use objects like showers and sinks with their invisible plumbing, your sims must first collect buckets of water from the well in order to flush the toilet, take a bath, wash dishes etc...
It's great for off-grid/ living off the land/ old timey pre plumbing era gameplay.

How does it work?
The well object itself is the decor object "The Old Dried-Up Well" from The Sims 3 Store, that comes with the Brunch at the Old Mill set.
Except it's no longer a decor object, or dried-up! Your sims can and need to actually collect water from the well in the form of buckets.
Each bucket is like one unit of water, and different interactions require a different number of units (or buckets) of water to be used. (See the Interaction List below for details)

Sims can either use buckets of water that are in their own inventory, or buckets can be stored in the stack of barrels object to be accessible across the household. So if you don't want to have to keep collecting loads of buckets for each sim, you can just collect loads of buckets of water and store them in the barrels, and all your sims will be able to use plumbing objects as normal for as long as the buckets last.
Note about the barrels: The stack of barrels is the decor object from WA, but works as an inventory to store buckets of water instead. It requires WA for now, but hopefully soon I will try and make it base game compatible. If you don't have WA you can still use the mod, but each sim will have to have buckets in their own inventory to use plumbing objects.

It's also only active sims that need buckets of water to use stuff, so the rest of town shouldn't be walking around with terrible stink clouds around them all the time.


Collecting water from the well:
To start with, you'll need to collect water from the well, otherwise your sims will be living a pretty nasty life!
The well has one interaction, "Collect Water", which is available to human sims aged child and up.
I have no animation experience, I'm afraid, so all that happens is that sims will walk up to the well and do a "swipe" animation, and a bucket will appear in their inventory.You can do this as many times as you want and have as many buckets in your inventory at once as you want.

Using the barrels:
The stack of barrels allows all sims in your household to access buckets of water to use plumbing related objects. It has two interactions -
"Add Water" moves all the buckets of water from your sim's inventory into the barrels' inventory.
"Check Water Amount" tells you both the total number, and available number of buckets in the barrel.
The total number is both the buckets that are free to use for interactions, and buckets that sims will need for their current interaction, but haven't actually been used up yet. See below for more of an explanation.

Doing the replaced interactions:
If you have enough buckets, you will be able to use the replaced interactions. Once the interaction starts running (your sim begins walking to the object), the number of buckets required will be "locked", which means they won't count as buckets available to use for other interactions. Once the actual animation starts, the buckets are then destroyed or "used up".
This means that if you cancel an interaction before your sim has actually interacted with the object, the buckets can become available to use for another interaction, and at the same time, sims can't start interactions if the only buckets that are there are ones that are already being used for another interaction. Sorry if this is confusing - it's not crucial to understand, just an explanation of how it works

Interactions that are replaced


All the interactions that are replaced in this mod to require a number of buckets in order to be used:

Wash Hands > 1
Wash Dishes >1 (Clean Up interaction is replaced to call the new wash dishes interaction)
Spongebath > 2
Flush Toilet > 1 (Use Toilet, Clean Toilet, Repair Toilet, Vomit (in toilet) are also replaced so sims will only automatically flush afterwards if they there is a bucket of water available to use)
Take Shower > 3 (For your very flammable sims, please note that they will need 3 buckets to Put Out Self, just like a regular shower. Same with Shower WooHoo


The numbers of buckets required for each interaction are tunable - see Tunable Values below.

There are some plumbing objects that are not affected (sims will be able to use these without needing any buckets of water). Some I may add in the future, others likely not

(see below for Future Plans)
Hot Tubs, Dishwashers, I feel aren't so important because they probably wouldn't fit the playstyle anyway...maybe I'm just lazy?
The Outdoor Shower and Public Shower from the Store aren't affected because they don't count as regular showers, but I may add these in to also require buckets.


The number of buckets required for each interaction are tunable. If you want to change them, open the package file and find the resource called zoeoe_WaterMod.Interactions. Right click on it and click on Notepad, and adjust the values as desired. To clarify, the number is how many buckets the interaction takes up. It has to be a whole number - you can't use half a bucket!

There are a few strings in this mod that can be translated. If anyone is interested in translating them, the main strings (interaction names etc) are in the STBL resources called zoeoe_WaterMod_strings. There are also the other STBLs for the object names and descriptions.

Installation
To install, just put the package in your mods folder. Only one version at a time

I would also recommend taking the mod out if you are playing a save that's not off-grid, so nothing strange happens

To Uninstall
Before you take out this mod, if you are planning on playing without the mod in save that has previously been affected by the mod (so you have been playing off-grid in), make sure your sims are not interacting with any plumbing objects when you save, otherwise the objects may become unusable. If this does happen, they should be okay if you sell and replace the objects, but I haven't tested this extensively so be warned!
It's a good idea to reset your town/reset all sims before uninstalling to make sure no sims are using objects affected by the new interactions.

Conflicts/Issues
This is a full script mod, and doesn't override any core files or resources. However, on load it does replace the interaction definitions of the interactions listed above. So if you have a mod that also does that , either mine or the other mod likely won't work.

NRaas Shooless is an example of this. If you have both installed, the interactions affected by Shooless (Shower, Use Toilet, Spongebath) will no longer be "off-grid". The interaction names for Use Toilet and Spongebath show up blank too.

One thing to note is that because this mod changes the interaction definitions, if you have mods that adjust the ITUN files of one of the interactions that are replaced, it won't have an effect. You can edit my custom ITUN files to your liking though, they are in the package file

If you do find a conflict, let me know.
The only other thing I have found is that if you have nraas WooHooer installed, the shower WooHoo won't work even if your sims have enough water. They do the social interaction and just stop. It does work if one sim is already in the shower though, so nothing too disastrous


With this mod, there are three objects: The well, the bucket, and the barrels.
I also used the already exported and unprotected dlls by Inje

A thank you to ani and her mods, namely the woodcutter and anvil mod, which greatly helped me figure out how to approach certain parts my mod.

And another thank you to Nona Mena's custom ITUN tutorial


Future Plans/Ideas
I've been working on this for quite a while now, and so I really wanted to get what I've done out before it drives me insane, but even though it's pretty much done, there are a few things I feel could function in a better way. I'd also be happy to hear any ideas/preferences that you have for how this could work. Here are just some things I have thought about:


Anyway, sorry for the huge description

If you have any problems, or feedback, please let me know, and I'll try to fix it.

Additional Credits:
A big thank you to Battery for all the help with my many struggles. I also used S3PE, Buzzler's STBLize tool, and Visual Studio 2017.


You can only have 1 version of the mod installed

See: Game Help:TS3 CC Basicswiki for a full guide!
Back to download view
72 Comments / Replies (Who?)