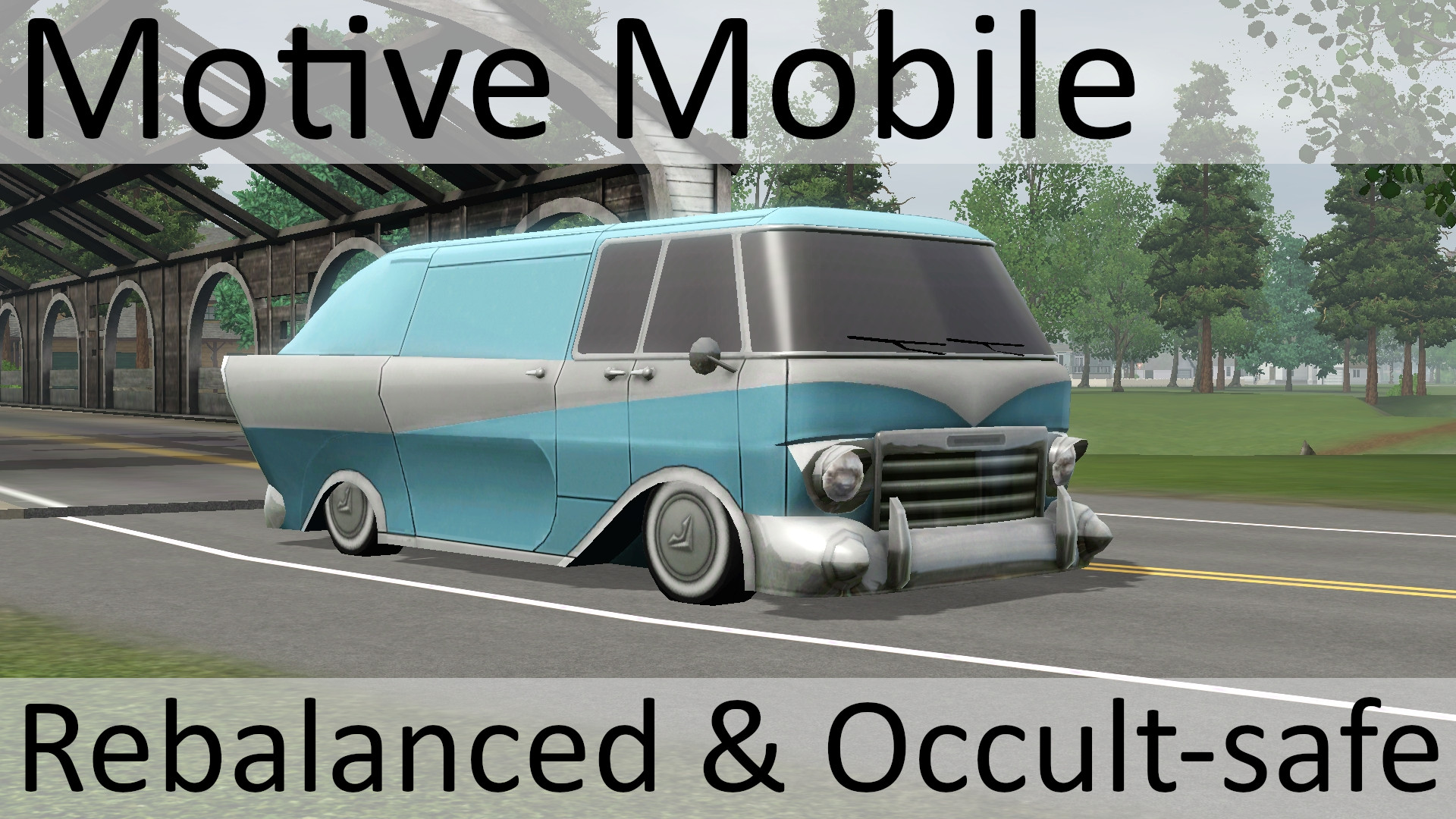 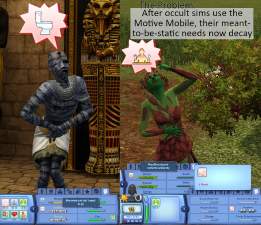 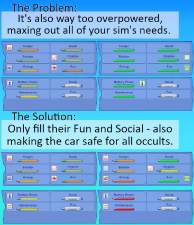 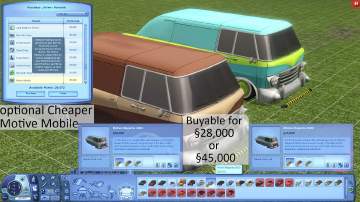 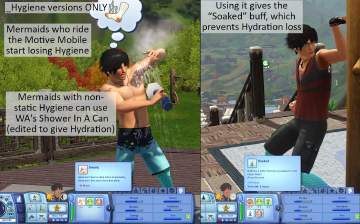 The Motive Mobile lifetime reward that came with Generations is pretty neat. I really like it, but despite that I found myself almost never using it, mostly for two reasons - one, it's way too overpowered (you may as well use MaxMotives every time your sim enters their car), and two, it bugs out occult sims, causing meant-to-be-static needs to decay.

As it turns out, there's a way to solve both of these problems with a simple tuning mod.

The Motive Mobile now only fills your sim's Social and Fun need. It will no longer provide your sims with food (which breaks plantsims), a toilet (plantsims & mummies), bedding (mummies & possibly aliens) or Hygiene (optional, breaks Mermaids & Simbots). Unproblematic needs that were removed anyways in the name of balance include Destruction/Scratching for Pets and Power/Maintenance for Plumbots.

Since it's a lot less powerful now, I also included some optional packages for a cheaper/buyable Motive Mobile.

I spent quite some time trying (and failing) to make the Shower in a can from WA useable by mermaids. Unfortunately, that doesn't seem possible, at least not while Mermaids have static Hygiene - but then I remembered that the Motive Mobile is glitched, and would cause occult sims' static needs to decay. So, since I was digging around in GameplayData anyways, I figured I might as well fix that bug (or most of it, anyways).

YTD_MotiveMobile_NoHygiene
Motive Mobile now increases sims' Social and Fun needs, and nothing else. Edits CarMotiveMobile_0xae5cf55a2f3394e1.xml and conflicts with the "Hygiene" versions.

YTD_MotiveMobile_Hygiene
Increases sims' Social, Fun, Hygiene and Hydration needs while riding it. Also changes the WA Shower in a Can to give Hydration in addition to Hygiene. Conflicts with the other versions, and any other mod that edits CarMotiveMobile_0xae5cf55a2f3394e1.xml and/or UseDeodorant_Deodorant.itun

YTD_MotiveMobile_HygieneONLY
Changes the Motive Mobile to only increase Hygiene (and nothing else), and makes it buyable for 5,000 Simoleons. Useful if you only want to give Mermaids the ability to use WA's Shower in a Can, and don't care for anything else. Edits the same resources as _Hygiene version & BuyableMotiveMobile

YTD_BuyableMotiveMobile
Turns the Motive Mobile into a buyable car. The _28k and _45k versions conflict with each other, the _HygieneONLY version, and any other mod that edits carMotiveMobile OBJD

YTD_CheaperMotiveMobile
Lowers the Lifetime Happiness Points required to purchase the Motive Mobile to 28,000 (from 45,000). Edits Traits.xml and will conflict with other mods that do so.

When using the "Hygiene" versions of the mod, there's a couple of things to note:

1. Simbots who ride the Motive Mobile will have their Hygiene need decay. They won't get any moodlets, although a red sock may eventually appear next to their hygiene need, and they'll likely try to get clean in the limited ways they can. Prepare for excessive teeth brushing, or reset them to fix it (until the next time they use the Motive Mobile, at least).

2. Mermaids lose their permanent cleanness after using the car and get stinky over time, but in exchange they can now use WA's portable Shower in a can. (At least until they're reset - if you plan on taking your mermaids to vacation worlds, you'll want to pack a Motive Mobile)

3. The shower in a can has been changed to actually provide mermaids with Hydration. You may need to purchase new ones for that change to take effect. Sadly they still can't be used unless your mermaid has gone on a trip with the Motive Mobile, but hey, it's better than nothing.

Also, a mermaid using a new shower in a can in anything but swimwear should get the positive "Soaked" buff, which prevents their Hydration need from decaying for its duration - great for those hot summer days that have you drying up!

If the flavors provided above aren't quite what you want, you can edit them quite easily. All you need is s3pe and Notepad.


First of all, open the flavor of your choice in s3pe. Right-click on CarMotiveMobile_0xae5cf55a2f3394e1 and select "Notepad" 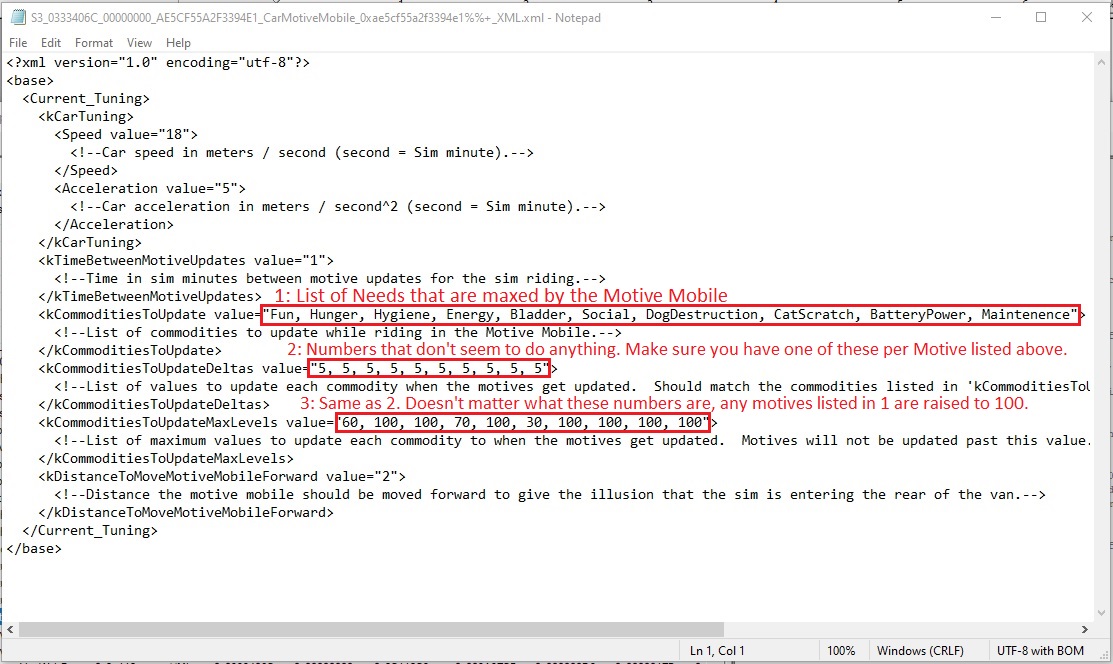 >1: kCommoditiesToUpdate. The motives you want to be maxed after entering the Motive Mobile. Values that can be used here are: "Fun, Hunger, Hygiene, MermaidDermalHydration, Energy, Bladder, Social, DogDestruction, CatScratch, BatteryPower, Maintenence"

>3: kCommoditiesToUpdateMaxLevels. Again, the numbers themselves don't matter, so just keep the number of entries (separated by a comma) consistent with the two categories above.

Let's say that, for example, you're okay with your Cat and Dog destroying the car from within, and would like the respective motives filled again:

See: Game Help:TS3 CC Basicswiki for a full guide!
Back to download view
3 Comments / Replies (Who?)