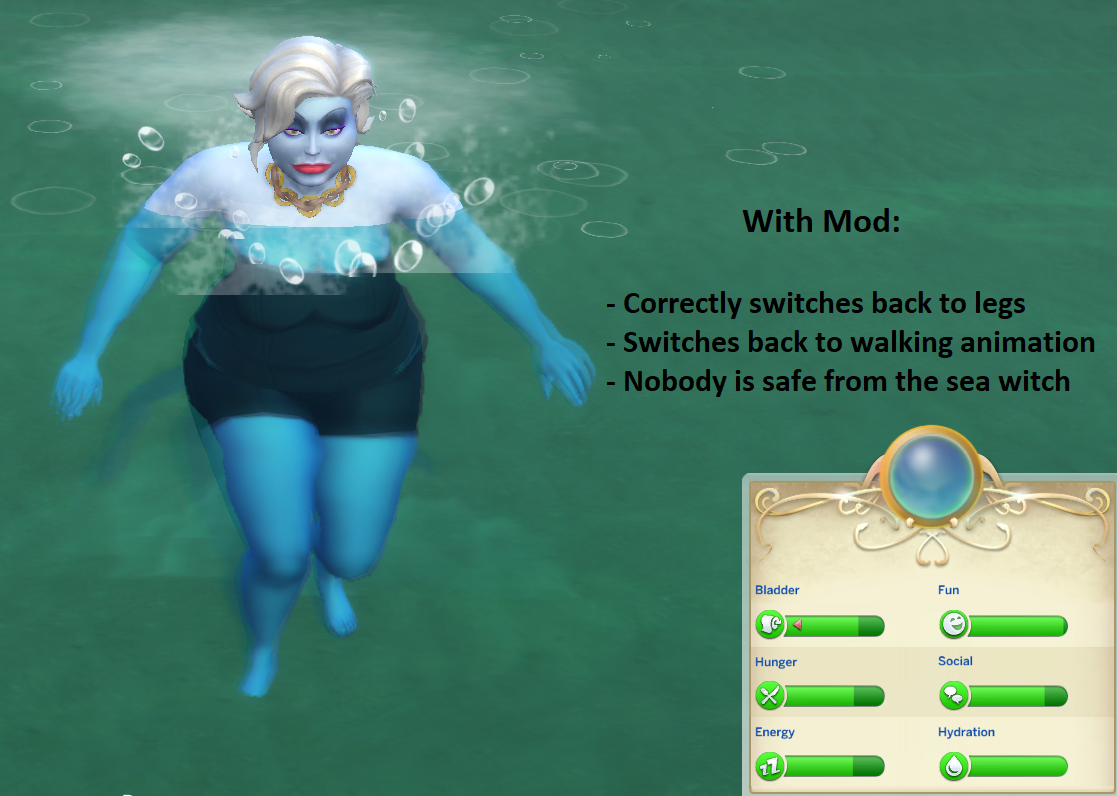 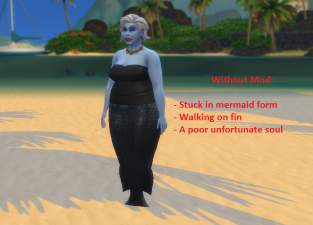 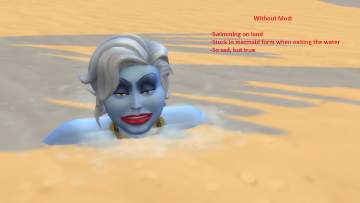 This mod has been replaced by my all-in-one hybrid stabilizer mod:
https://modthesims.info/d/647863/

This is a script mod. The contained .ts4script file must be placed directly in your mods folder or at most 1 folder deep or the game will not load it.

While this mod was originally designed to fix issues with mermaids, it is usable without island living. It fixes many annoying bugs and issues with hybrid occults.


Update: 2020-9-27: Removed the preview version and merged all of its changes into the main version. Added the following additional fixes:


Update: 2020-9-14: Added a preview version of the next release which fixes the batuu outfit interaction and CAS. Please report any bugs you see.
Preview version has the following fixes:

Update: 2020-9-9: Updated to be support a new mod which enables occult forms to safely be edited. https://www.modthesims.info/download.php?&t=647154

Hybrids aren't "officially" supported by EA, so there will still be some remaining issues while playing them that this mod cannot fix.

Please read the known issues list before downloading so you know what to expect.

Please report any issues the mod may cause which are not listed under Known Issues.

You will need to use debug cheats or a mod to make your sim into a hybrid.

(Seasons only) Vampire-Mermaids without sun immunity STILL cannot swim in the ocean while holding an umbrella during the day (Not really a high priority bug to fix...). Use the umbrella rack to put your vampire-mermaid's umbrella away before trying to kill them in the sea.

A mod born from the frustration of an angry simmer who was enraged at the unplayable state of hybrid mermaids. The fury of watching mermaids swimming in the ground and walking on fins was enough to drive the disgruntled simmer to madness, forcing him to learn how to mod the game so he could remove the grotesque sight from the game.

This mod aims to fix some of the main problems with hybrids to make them actually playable.

Use my new mod which enables you to safely edit all occult forms: https://www.modthesims.info/download.php?&t=647154

I recommend using Gauntlet101010's Hybrid Stablizer mod to lock out any forms you don't want: https://www.deviantart.com/gauntlet...lizer-742150773


I recommend AGAINST adding both vampire and alien to a mermaid. Having that many occult forms causes the Alien form to always be in danger of being deleted and regenerated every time you load into the game.

Because this is a pure scripting mod, it should be compatible with nearly any other mod in existence. Only mods which try to modify the mermaid form or script mods which override (not just inject to) the following script functions would cause issues - (I'm not aware of any such script mods which completely override the functions).

Additional Credits:
Credit to simcrazy5 for their Ursula sim in the in-game gallery.

Need more information?
Back to download view
34 Comments / Replies (Who?)