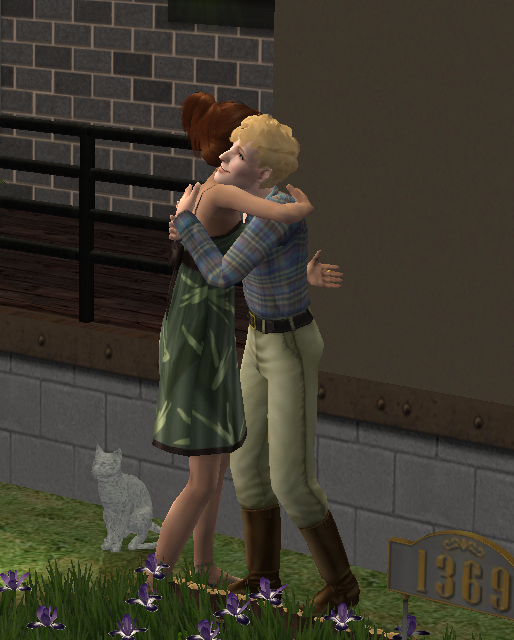 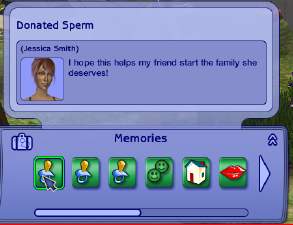 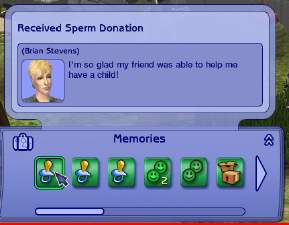 173 Thanks  Thanks     65 Favourited
Update:
This hack introduces a new social interaction which can be found under the Propose... menu called Request Sperm Donation, which will make your sims pregnant with their child, but on birth the child's second parent will be set to a sim of your choice.

To install this hack, you need to download four different packages:To see what all the options are, read on.

In order to use the social interaction, the sim must have 500 simoleons, and the other sim cannot be related to the selected sim by blood, or be the sims' spouse (because honestly that makes no sense). (They can, however, be step-family or an in-law). If you have the extendedfamily hack, you will need to get one of the +extendedfamily versions of the social plugin for it to properly exclude extended family. The potential donor must also be capable of getting the selected sim pregnant through woohoo in your game, which will depend on which pregnancy mods you have installed. Any mod that changes what ages of sim can get pregnant should work with this, so if you have a young adult pregnancy hack, then young adults should be able to use the interaction, if you have a teen pregnancy hack then teens should be able to use the interaction, etc. However, the only hack that changes which genders can get pregnant that will work with this is MidgeTheTree's RCC (available here: https://midgethetree.tumblr.com/pos...-documentation), in which case you will need to download one of the +RCC versions of the social plugin. Otherwise, the hack will just assume that women can get pregnant and men can't. If you want e.g. the effects of PregForAllGenders and still want to use this hack, I recommend getting the RCC and setting the global alien toggle, which will have the same effect as PregForAllGenders, but since it will be the RCC, it will work with this hack. Finally, the social interaction requires 30 lifetime relationship towards the potential donor to show up.

Acceptance of the social

Effect of the social

This should be compatible with most game configurations, but it does require at least one EP that is OFB or later.

This hack requires my Name the Father mod (found here: https://www.modthesims.info/d/63694...the-father.html) to work properly (load order is not important). If you have extendedfamily and/or the RCC, be sure to get the +extendedfamily and/or +RCC versions of the social plugin. This hack should not conflict with anything, since it consists entirely of self-contained custom objects (all of the actual hack part is covered by Name the Father).

You can remove the social plugin and social object packages at any time, but if you want to remove the memories you will first need to use SimPE to delete all memories generated by this hack and then open the neighborhood and delete all gossip with the lot debugger.


Download one social plugin, one social object, the parent memory, and one donor memory.