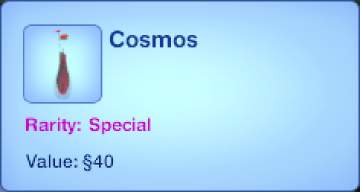 86 Thanks  Thanks     16 Favourited
This is a simple tuning mod for the Seasons expansion. I've always hated how I could just go to the park every morning with my Sim and he could just pick wildflowers instead of needing a job.

As far as I know, there isn't any tuning mod out there right now to nerf the prices... so, I made my own!

The mod is incredibly simple, I just used a calculator to find the percentages and rounded them normally to whole numbers. If you wanted to I bet any of you could make this, but for those who don't want to mess with S3PE to do it, I did it for you.

I made 4 flavors for the tune:

The above example image is taken with the Nearly Worthless flavor, which simply takes the starting value of 5 and adds 5 for each rarity.
Daisy is worth 5 simoleons and so on. Other flavors simply are percentages of the original sell value, so that should be self-explanatory.

REQUIRES SEASONS(probably)! Don't know what it would do without the EP but you don't need it anyway if you don't have it.

Will probably conflict with any mod that edits the Wildflower XML file, but I don't know of any that directly does. I use a ton of mods and it works fine for me, so hopefully everything works out.

See: Game Help:TS3 CC Basicswiki for a full guide!
Back to download view
8 Comments / Replies (Who?)