It is time for me to say 'adieu' and retire from modding TS4. The decision is a purely personal one. Thank-you to those who supported me during my run. I've been at it since this game first released, and I really appreciated the kind words that kept me going now and again. If anyone wishes to take up any of my mods, feel free. I have gathered a retirement archive for your convenience. Happy simming! ~MB }i{

For catalina_45's Espresso_machine give more energy mod (Get Together EP), a supplement to this mod, go here: http://www.modthesims.info/download.php?t=569384 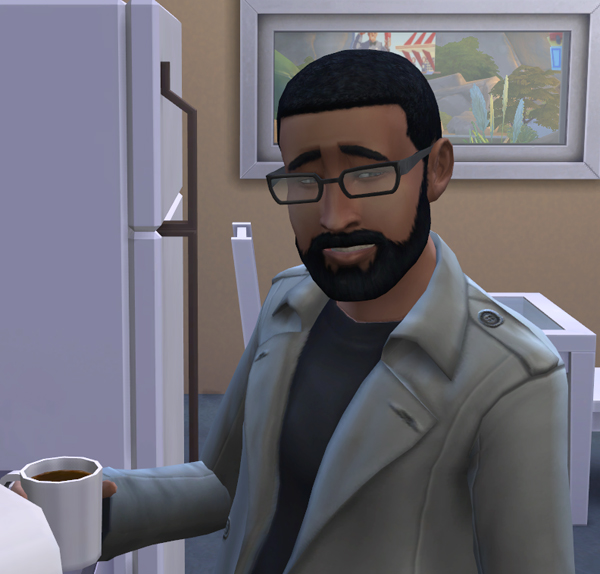 This mod is a very basic mod. It only took me ten days of stalking our top modders. I was like a window-peeping pervert! Simply put, this mod increases the energy given by drinking coffee. It comes in two flavors - Strong Caffeine or Medium Caffeine.


The default value had the numerical value of 10. Here is what I have changed:

Bonus!
As a bonus, I have included caffeine for tea as well.


The default value had the numerical value of 0. Here is what I have changed:

Thanks to Brainbox, we now have two new flavors for tea! More accurate energy for tea comes in two flavors, Regular and Stronger. If you use one of these new flavors, be sure to remove your previous tea mod.


The default value had the numerical value of 0. Here is what I have changed:

You may use one of these two flavors with your Accurate Tea mod ONLY. Sleepy Time Chamomile will conflict with the original tea mod (Tea Gives More Energy).

How to Install (Important!)

Unzip the file and place in your Mod folder! Install only one flavor. Choose one coffee flavor and one tea flavor. (Sleepy Time Chamomile may be used in addition to an Accurate Tea flavor.)


If you haven't done so already, follow these set-up instructions written by Plasticbox:

(i.e.: open that file in a text editor and add the line "DirectoryFiles unpackedmod autoupdate" (without quotes) underneath whatever other text it has.)

Plasticbox also notes that this set-up might change in the future as patches to the game are released. Currently, this set-up only works with 1.0.677.20 or later. (Thank-you Plasticbox for giving me permission to copy/paste these handy instructions!)

Made with TS4 XML Extractor by Velocitygrass and S4PE by Kuree.

You didn’t call the cops on me or anything!
Tags: #coffee, #tea, #energy, #caffeine

Need more information?
Back to download view
164 Comments / Replies (Who?) - 60 Feedback Posts, 97 Thanks Posts
Hide Thanks Posts for this thread (Show only feedback)
Page 2 of 7
~MadameButterfly~

If you do the homework for me, and say which gets what, I can do that. Right now I'm a little fried. Stayed up too late talking to my brother who is stationed over seas. (It was his birthday.) I'm not allowed to have caffeine, personally. Or I'd grab a cup right now.
♥ }i{ Monarch of the Receptacle Refugees }i{ ♥
~MadameButterfly~


Yeah. The strong is quite strong. lol!
♥ }i{ Monarch of the Receptacle Refugees }i{ ♥
plasticbox
Pettifogging Legalist!
retired moderator THANKS POST

LOL at the "stalking"! ;) Great to see you got it to work, and now that my impoverished sims bought their first coffee machine, I also realised how necessary it is to put some caffeine in that! Thank you!
plasticbox
Pettifogging Legalist!
retired moderator

Also, can you perhaps copy + paste the install instructions into your download post? Just in general, downloads on mts should be "self contained" wherever possible -- it would be good if your post still had complete instructions even if mine got deleted / moved / exploded somehow. Thank you! =)
Stuff for TS2 · TS3 · TS4 | Please do not PM me with technical questions – we have Create forums for that.

In the kingdom of the blind, do as the Romans do.
MiniMimi
Top Secret Researcher
THANKS POST
#30

Thank you, I love coffee IRL and it bummed me a bit that coffee was so feeble in game. I think it's in fact decaffeinated coffee they got in there :p
And adding it to the tea is nifty too

Ahhhh, I see! Thank-you! I will fix it to include that. That makes total sense. (I uploaded a couple more, so I will have to fix those too.)
♥ }i{ Monarch of the Receptacle Refugees }i{ ♥
LustfulApplePie
Test Subject
THANKS POST
#32

Thank you so much for this!~
hlvspomtactfr
Lab Assistant
THANKS POST
#34

I love this! Thanks for sharing :D
elpacksims
Test Subject
THANKS POST
#35

Thank you so much for this! It's totally like Super Turbo Boost. Very useful. I find myself going for another cup of coffee each time one of my Sims does.
Cookiemonk
Test Subject
THANKS POST
#36

Quote:
Well, I went ahead and did just that, and I have to say it was a fascinating bit of research into the various coffees, teas, brewing methods, and so on; I love it when things like mods and such gives me a reason to look into random stuff like this.

Anyhow, what I've discovered is that, for the most part, the coffee caffeine settings are pretty much good enough as they are; there would be some difference for the espressos vs regular coffee, but that primarily differs according to servings sizes (as well as brewing methods, etc) and since I couldn't find any way to actually obtain the espresso coffees in game to see what cup size is actually used for them it's probably safe to just assume the caffeine contents for the coffees are good as-is. Side-note: I wonder if perhaps the flavored coffees relate to the teen "Barista" job path, or if maybe they're simply data files included in the base game that EA never got around to using?

So, that basically put the teas as being the main area where a variance setup would be most desirable. Regarding teas, the main things I found out is: Herbal teas (Chamomile and Ginseng) generally contain no caffeine, Green Teas generally contain low caffeine, and the other 'regular' teas (black, oolong, etc) generally contain a moderate level of caffeine compared to brewed coffee (it apparently would contain as much or possibly more caffeine than coffee, as the tea leaves naturally contain more than coffee beans, but the differences in the brewing process and so on cause more dilution for teas resulting in less caffeine). At least, that's the information I was able to glean from a mere hour's worth of internet research, so I'm not exactly 100% confident in my analysis (but it should be close enough).

Putting those values for tea caffeine levels into lists then looks something like this:

Anyhow, hopefully this has helped and either gives you a working number set to go with or gives you an idea of where to go with it based on your own judgement; either way, it was a fun little exercise.

Wonderful, Brainbox! I'll get right on it!

Edit: Finished! I did have to do a small adjustment to the numbers, but thank-you so much for your help! The download files should be live shortly.
♥ }i{ Monarch of the Receptacle Refugees }i{ ♥
MrsTragicClown
Test Subject
THANKS POST
#39

About time and no bladder going down too!
Brainbox
Test Subject
#40

Quote:
No problem, and thanks again for creating these mods.

Coffee really needed a buff, thanks for this mod!
f3rzz
Test Subject
THANKS POST
#42

this is great :3 considering how alow they drink i felt the little energy they gained by drinking coffee was totally lost while doing it. SMH.
deedee2413
Test Subject
THANKS POST
#43

Thank you! The original energy gain was just not worth it. At least now they can use coffee the way it's supposed to, and stay up longer.
simaholic63
Test Subject
#44

I think I followed instructions, but it's not working...help?
I'm wondering something. It doesn't seem to be working for me, and I'm wondering if these work if you place more then one of these types of mods in the same folder. I can't have 2 folders called unpackedmod in my Mods folder, and I can't have more then 1 resource file in the folder either. Is there a problem when you place different mods in the same folder? Right now, I have the Medium Coffee, the Medium Tea, the Medium Orange Juice Power Ade, and the TeenForAll in the same folder, using the same resource file, with the added line as instructed. I haven't checked to see if the teen jobs are showing up. I'll check on that next time I play. They show up in my list of mods, but not under script mod, which I assume is correct.

Can anybody tell me hoe to add a line in the resource.cfg
~MadameButterfly~

You only have to do the set-up once for these types of mods (xml mods). After that, you just put them in the /Mods folder as usual. These are not script mods, so they do need to be extracted from their .rar before being placed in the /Mods folder. Your /Mods folder should only have 1 empty unpackedmod folder and 1 resource file.
♥ }i{ Monarch of the Receptacle Refugees }i{ ♥
~MadameButterfly~

Make a back up copy of your file and place it somewhere safe outside of the Sims 4 folder. Then right click the file that is in your /Mods folder, open in Notepad, on the next line of text paste in the new line, and then save file.
♥ }i{ Monarch of the Receptacle Refugees }i{ ♥
muramasatop
Test Subject
THANKS POST
#48

This is really awesome!
zefelici
Test Subject
THANKS POST
#49

WHOA! Thanks a lot, seriously!

Would it be possible for you to change the value of the "Chamomile Tea" for a negative number? I drink it so I can sleep better, so I was wondering if my Sims could do that as well

Quote:
lol That's exactly what I was thinking, mostly for elders sims or sims out of phase that you need to put to bed for school/work