by Kitty259 Posted 23rd Jun 2016 at 1:02 PM - Updated 12th Apr 2021 at 9:47 AM by Kitty259 : outdated, new version pending!
65 Comments / replies (Who?) - 12 Feedback Posts, 3 Thanks Posts
This is a Maxis Recolour which means that it is a recolour of an item that already exists in your game. Please check the Expansion pack requirements to see which game pack it recolours.

Since the skin tones update, THIS MOD NO LONGER WORKS! But don't worry, more updated content will be coming soon!

Hey there, community! Sorry that I haven't posted in awhile, but I finally made a new project, and it's a big one to say the least. Thanks to CmarNYC's Skininator tool, I bring you 54 new skintones! Sure, she made this so everyone could make custom skintones, but I would imagine not everyone knows how to use it, so I made some new skins for the non-creators on MTS. There are 14 warm and cool skintones, 16 fantasy skintones, and 10 pastel fantasy skintones. I say that it does not require GTW because the two fantasy packs are in ONE package, meaning that the same package works for both humans and aliens. But if you have GTW, you'll get 26 new skintones for aliens as well! And as said in the title, these are Maxis match, so they look exactly the same as the Maxis skintones, only in many more colors. They work for child-elder and they are all compatible with each other, and show up in correct order in CAS, so it wouldn't matter if you downloaded one package, or all of them. However, the sort order may conflict with other non default skintones, but that won't affect the actual skins. These skins are not genetic. So if you decide to use these skins for sims you're planning to make babies with, you'll just have to change the baby's skintone once they become a child, which is easy to do by using the cheat 'cas.fulleditmode.' And yes, these skins work beautifully with Cmar's skin details mod (but without it, it's complete Barbie). 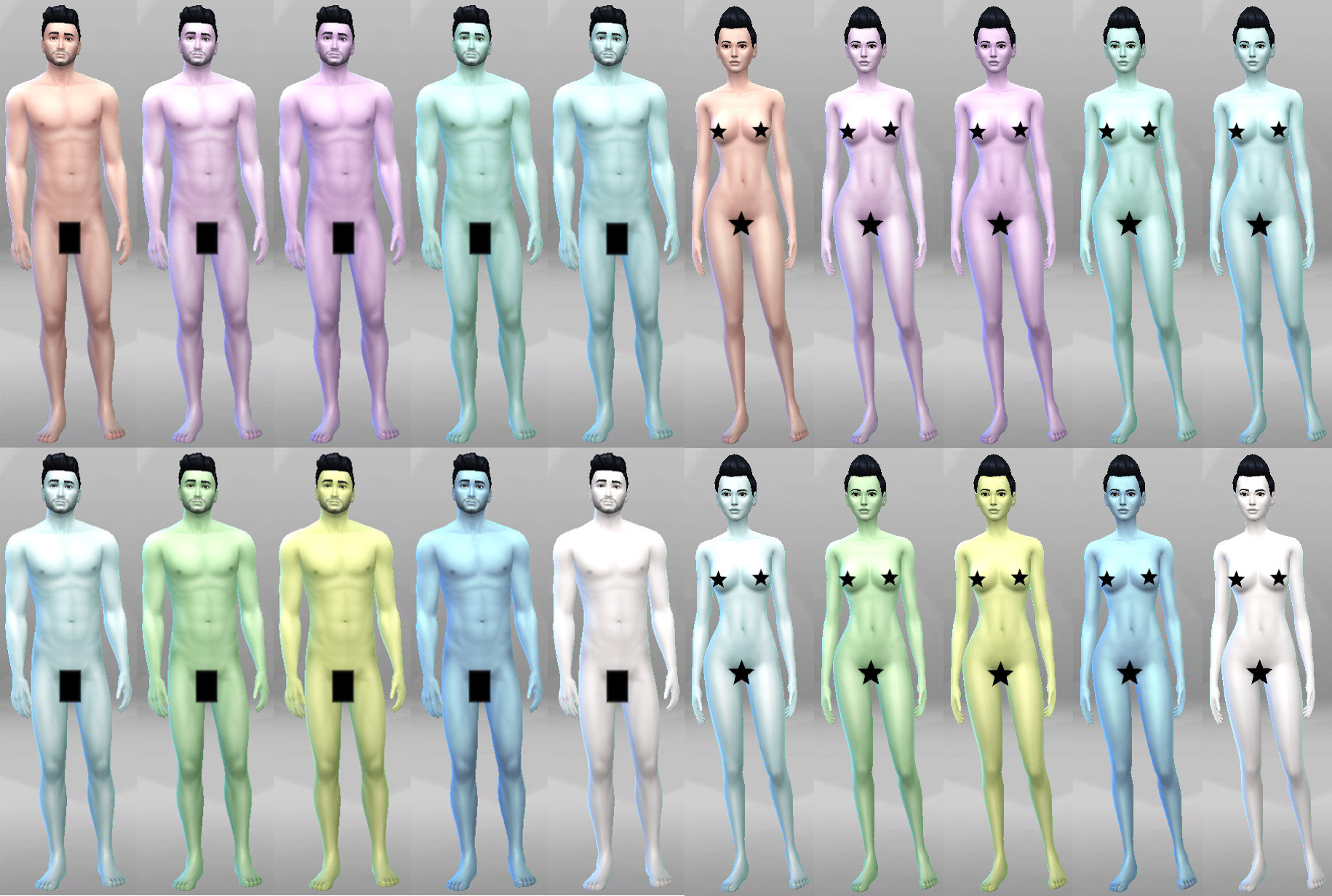 Need more information?
Back to download view
65 Comments / Replies (Who?) - 33 Feedback Posts, 28 Thanks Posts
Hide Thanks Posts for this thread (Show only feedback)
Page 3 of 3
Pamtastic72
Lab Assistant
#51

I'm sad
I wish these skin tones were updated for Island Living and WW. I really love them, and nobody else's offers so much variety or looks so good in the game. They were absolute perfection when they worked completely. Please consider updating them if you can, they are quite simply the best available anywhere

Are these enabled for random generation? I want to make a few cool looking colorful sims, but I don't really want my whole town to get rainbowed...
xSinDollx
Test Subject
THANKS POST
#53

EXACTLY WHAT I WAS LOOKING FOR!!!
Queen Zelynda
Test Subject
#54

So...I downloaded these recently, mainly FOR the weird skins--but I've been having this odd glitch. The first time I even knew it was a thing, was when I had a Sim take their cat to the vet for the first time...and the vet lady had the FREAKIEST shiny, semi-transparent...full-of-crossed-lines skin, like a texture was missing.

So this tells me three things: One, that even while horribly disfigured, a dedicated vet can still do her job.

Two, that these skins DO TOWNIFY. REPEAT: THEY DO INDEED SHOW UP ON RANDOMS for anybody who was wondering. And Three, that they glitch out as soon as their skin has _any_ other look besides the standard one.

It's not just tanning. I've seen it happen on a pink-skinned character I made, as soon as she got dirty. Somebody else mentioned the tanning from Island Adventures, so I assume with that and the dirtiness, it'd _also_ glitch when a character is burned or freezing.

It's really a shame, because otherwise you could DEFINITELY count me among the people asking for these to be genetic. Now, I'm wondering how it'll mess things up if I just flat-out take them out of my game, considering that at least two characters _already have them_...
miss_kitty
Test Subject
#55

Quote:
They do this because they haven't been updated for the latest patches, I'm guessing. They also don't appear for occult sims unless you update them in Skininator or Sims 4 Studio. As far as I can tell, none of these skins have been updated since 2016. You can try this tutorial to fix them, that's what I'm doing. If it doesn't work...I guess I'm looking for new skin tones. https://www.patreon.com/posts/tagging-for-33601346
Phantomcelebi
Test Subject
THANKS POST
#56

I updated your skintones to work with all the current Occults. Do you want it so you can post it on your modthesims?
thedoctor8ahorse
Test Subject
#57

Is it bad if I have these skin tones in game and they still work? I like to use them to make rainbow sims for fun.
nataliecv
Test Subject
THANKS POST
#58

Glad to hear you're working on new ones. Looking forward to them!
nataliecv
Test Subject
#59

I'd really love to see these as I don't know how to fix them myself.
Rowan2112
Test Subject
#60

Do you think you'll ever get around to updating this for the new Skintone Update that just happened?
sundancr
Test Subject
#61

I doubt they will update this mod considering how long ago it was updated, makes me mad they put these cc out there and don't keep up with it, All my alien skin tones are not useless and I have been checking and checking to see if they have been updated and they have not been, so far I have only seen two modders who have updated their skin tones to work with the new update, its still early so maybe but I aint holding my breath
CuriousChild
Test Subject
#62

Hello, I have updated and enabled the warm and cool skin tones for humans only as that is what I use. You can do the rest yourself using CmarNYC's TS4 Skin Converter or ask me to do the rest for occult sims also. It works with the new skin tone update.
emik0
Test Subject
DELETED POST
15th Mar 2021 at 4:45 PM

This message has been deleted by emik0. Reason: Ive menaged it
vampyress83
Lab Assistant
#63

will you be updating this for the cottage living update?? do it would be nice to have it work on the occults too..

QUOTE=CuriousChild]Hello, I have updated and enabled the warm and cool skin tones for humans only as that is what I use. You can do the rest yourself using CmarNYC's TS4 Skin Converter or ask me to do the rest for occult sims also. It works with the new skin tone update.[/QUOTE]
liravensims
Test Subject
#65

Quote:
If you use the skin converter that they linked you can set the skin tones to all occults. It's extremely easy to use. just import the package file and choose a output folder for the converted skin to go in. Only takes a few minutes for it to convert them.