by Princess Leia Posted 22nd Jun 2009 at 4:04 AM - Updated 23rd Sep 2010 at 4:10 PM by Princess Leia
340 Comments / replies (Who?) - 24 Feedback Posts
Picked Upload! This is a picked upload! It showcases some of the best talent and creativity available on MTS and in the community.
Note: This Sim was made back when custom content was virtually non-existent so you can probably find a better version of MJ somewhere. Run along, grasshopper.

Hopefully this man needs no introduction. It's the King of Pop himself, Michael Jackson. Although lately he's known more for his personal troubles and legal battles, it's hard to deny that he had a large impact in music and pop culture. Plus, I'm sure he'll make a very interesting addition to your game. Wouldn't you just love to have Michael Jackson roaming around your neighbourhood? Although he's gone now, maybe he can live on in your virtual world. 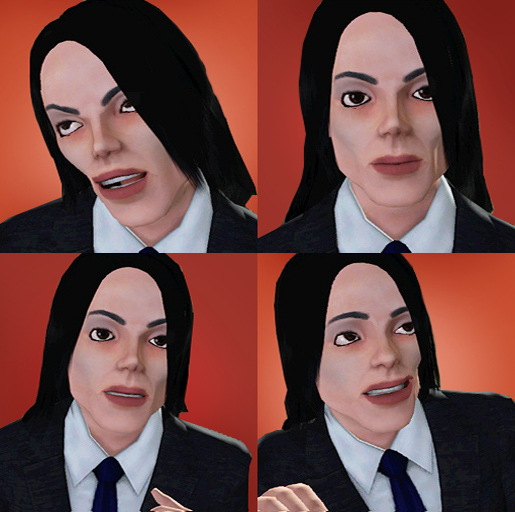 The many faces of Michael Jackson! His jaw doesn't look so wide in those pictures but I think it's just the angle; he looks quite dashing in CAS. For maximum hilarity, play him with these traits: Virtuoso, Family-Oriented, Childish, Insane and Party Animal. I had to include Party Animal in there to get the Rock Star lifetime wish.

Have fun! Here he is at Riverview cooing over a child.

Back to download view
340 Comments / Replies (Who?) - 293 Feedback Posts, 6 Thanks Posts
Hide Thanks Posts for this thread (Show only feedback)
Page 2 of 14
ZimZ
Theorist

I found your michael Jackson sim uploaded to the exchange by some one called uo_2272
I'm not sure if this is your sims 3 account but this prson has disobeyed your policy.
Just thought I'd let you know, if it is your account sorry to bother you.

Quote:
Originally I was gonna make 80s Michael as well, but couldn't due to the lack of appropriate hairstyles. I spent a bit of time Googling him and was amazed by how good he looked! It's a shame I was only around during his Skeletor years.


Quote:
Thanks a lot for the heads up! I don't have an active Sims 3 account so that's definitely not me. I'll check out their Sim since it may just be another MJ. I've seen a few floating around (although I prefer this version! Hah)...
Twi

This is really spot on! Terrific job :D
Check out my other downloads at my blog!
ZimZ
Theorist


Ok, it looked slighty different but it was really similar

This is so amazing thank you!

Well done on finally getting him finished!

It's ok, we all laugh-snort occasionally!
Check out some of my other stuff here.

lol thanks its exaCtly to Michael Jackson
xred5rozex
Test Subject
#32

LOL! That screenie of him starring at the kid is hilarious. You've done a great job of creating a sims version of MJ.
"I am not discouraged, because every wrong attempt discarded is another step forward."
-Thomas Edison
spoiled_hottie_4
Test Subject
#35

This is awsome !!! very well done, looks just like him

Thanks ! Will have him in my game for sure
Awsome job
Nyami

This message has been deleted by Violet_Placebo.
centerman

Princess Leia I'm UO_2272 on the exchange. My Michael Jackson on the Sims exchange is my own unique version. I think it's close, but honestly inferior to yours. I'm humbled by work.

My Michael 2
http://www.thesims3.com/assetDetail.html?assetId=197474
Username: Centerman
in The Sims 4 Gallery
ZenFrog76

Wow...first creepy Paris Hilton now an equally creepy M.J. I am gonna pair them together and see what kids they make...mwhahaha!
Zen
www.crystalgecko.co.uk

Never wake a sleeping Dragon...for you are small and crunchy and taste good with ketchup!
Simmiller

centerman: yup, I checked out your Sim and figured they're not the same. No worries. I think yours is fine; you just have to make the eyes and nose smaller.

ZenFrog: The universe just imploded from the awesomeness of that idea. I'm gonna breed them too.
summersong86

Just because you CAN, doesn't mean you SHOULD. Aieeeeeeeee!

Awesome work. Too awesome...this dude would freak me out. Even if I had the necessary CC to properly install him, I just can't. Paris is scaring me enough already. Though really--your Sim is way more human looking than the real deal, sad to say.

Michael was REALLY gorgeous way back, once upon a time. He had beautiful brown skin, nice natural nose and even the second nose-job looked almost natural enough. Everyone wishes he would have stopped right then and there. Nobody could have seen what he'd do to that beautiful face and if you would have told us what was coming down the road, we wouldn't have believed it back then. Not at first, anyway.

The first time I heard/saw him, I was 13 years old and walking down the aisle of a Montgomery Ward dept. store (now extinct) and had wandered into a special display set up showing Thriller on a repeating loop. I'd never seen a music video before and I'd never even heard true multi-directional sound separation before. All I knew is I was surrounded by speakers and sound, where prior I'd only ever heard music out of a transistor radio's tinny speakers or my parents wood furniture-esque stereo. I was mesmerized--and not just by the technology, but by the content--that was one helluva video and Michael was incredible at what he did. What an introduction to the music video era! It was a magical moment I remember 30 years later.

I find it impossible to wrap my mind around the fact that that handsome man and THIS thing are the same person. I feel like MJ, the King of Pop, died long ago, and THIS thing that calls itself Michael Jackson is really one of the monsters from the Triller video taking over.

You did an incredible job!! He's just perfect! And I love the screenies, the level of creepiness is complete :D
Misty on Tumblr
gu55y
Test Subject
#46

Haha. Just as scary as in real.rofl
I don't download sims, but I just wanted to say that he looks just like the real michael.
Good job!
Creator and owner of SimsShine
www.simsshine.com
MalakaiV

Incredible job on creating the likeness... now you just need a Macaulay Culkin child Sim to make the creepiness complete. I don't normally include many real life celebrities into my Sims games but this is tempting me and scaring me at the same time.