by HystericalParoxysm Posted 18th Dec 2008 at 3:32 AM - Updated 3rd Apr 2015 at 12:49 AM by HugeLunatic
109 Comments / replies (Who?) - 14 Feedback Posts, 11 Thanks Posts
This is a new mesh, and means that it's a brand new self contained object that usually does not require a specific Expansion pack (although this is possible depending on the type). It may have Recolours hosted on MTS - check below the description for more information.
This download is part of the Stuff for Kids Creator Challenge

A traditional and simple design, variations of this basic form have been used for ages as an infant's first bed. The small size means it can fit just about anywhere with ease. Little babies sleep well in moses baskets - often better than in a larger crib due to the enclosed feeling being comforting and cozy. 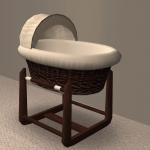 Back to download view
109 Comments / Replies (Who?) - 86 Feedback Posts, 19 Thanks Posts
Hide Thanks Posts for this thread (Show only feedback)
Page 4 of 5
LadyMorgane
Test Subject
#76

Hey, I'm having the issue where it won't work if there's a toddler on the lot, can you tell me how to make it so toddlers can use it? I'm sure that'll fix the problem.
hollieanne123
Test Subject
#78

Could anyone make this file into a "zip" file that uses windows explorer not adobe reader, so that I can download it?
Thanks.
HystericalParoxysm

hollieanne123 - Get WinRAR, 7zip, or any other extractor program.
my simblr (sometimes nsfw)

“Dude, suckin’ at something is the first step to being sorta good at something.”
Panquecas, panquecas e mais panquecas.
hollieanne123
Test Subject
#80

could you change the file type to "zip" please ??
thanks.
HystericalParoxysm

No. But you can go get WinRAR, 7zip, or any other extractor program.
my simblr (sometimes nsfw)

“Dude, suckin’ at something is the first step to being sorta good at something.”
Panquecas, panquecas e mais panquecas.
hollieanne123
Test Subject
#82

I REALLY love this but for some reason my computer cannot download it...
If someone could change the file type into "zip" that would be amazing!
("zip" is the file that uses windows explorer)
Thanks, if possible!
HystericalParoxysm

Or you could download any archive extractor program, like Winrar, 7zip, etc... I'm not changing the file type and you're really limiting yourself, refusing to get a simple program that will let you use rars and 7z files - which are pretty common here and elsewhere.
hollieanne123
Test Subject
#84

How do you get WinRAR or 7zip?
HystericalParoxysm

There's a link to WinRAR on the Install Instructions tab. 7zip you can google.
ilovesrk
Lab Assistant
THANKS POST
#86

*facepalm* (because of people who complain about .rar files, not because of the moses basket LOL)

Just What I Need

great looking product, maybe someone can please help me make it work?
VirtualAlex

Has this issue of the crib not being accessible to the second born been fixed yet? Because this is a lovely crib and all babies should be able to use it!
Fredz
Test Subject
THANKS POST
#91

When I had Sims 2, this basket was always the FIRST thing I bought for a new baby. Brings back my ts2 memories.. :') This was always a lifesaver, so that my Sims automatically knew which bed to put the toddler in, and which to put the baby in. LOVED IT(: amazingg.
LadyGreenEyes649
Field Researcher
THANKS POST
#93

Very nice! Wished for one of these from the first little sim baby.
Razilch
Test Subject
THANKS POST
#94

Hello, please would this be possible to make for the Sims 3?
I absolutely love this basket and really miss having something to put babies in.
Thank you. xx
racingGal13

I don't know if this issue has been reported yet. I downloaded the Moses Basket a few weeks ago to use in my Sims 2 game. I booted up my game and I put the basket in the house of a couple that had a newborn. When the baby was born, I had the mother try and put the baby into the basket. But when my cursor hovered over it, it said "There are no options available". I gave up a while later with trying to figure out what was wrong and I just deleted it. Anyone else have this problem?
sophie183
Test Subject
THANKS POST
#96

This is cute
Inopportunist
Test Subject
#98

I love this mesh! It's perfect for my medieval and Victorian sims. Though I recently had a problem similar to what others are describing above. My sim had a daughter and later had a set of twin sons. I was impatient and used a cheat to accelerate the second pregnancy so the three were in infant stage at the same time for about a day. The daughter grew into a toddler and I replaced her Moses basket with a toddler bed. There were no problems until the twins needed to be changed. When the parents were done with the task, I tried to have them set the babies in their baskets but there were no actions available. There isn't much more I can tell you as I had to uninstall my game recently because of a computer crash. Is there any way to get around this problem once I do reinstall my game?
SakuraKat
Test Subject
THANKS POST
#99

I've been having this issue as well. It worked great for the first kid on lot 1, then I had to buy a new one for the second baby because it wouldn't let me select it the moses to do anything. That worked for a while.

Now, though (lot 2), it's not working at all. I'll have to try it in a different house and see if it's just the lot, since it's had some other interesting things happen (nanny vanishing into thin air, the gardener spontaneously combusting just as she finished for the day. The sims having twins having the pregnancy from hell despite the lifetime rewards for lower decay). I think I'll try buying 2 first. Then maybe re-installing it and trying (I know at least one hack has to be installed in order, so maybe it needs to come in after something?). Then moving them in and out of the hosue. I"ll report in if any of these work.

But I'll agree with the rest of the comments - it's an adorable object, and thanks so much for creating it!

Update: It's not just the one house. Anothe rhouse has the same issue.
(Also, IIRC the nanny didn't vanish - she got stuck under the house, which was lowered for a basement, but didn't actually have one... including no stairs to escape. )
Befaid
Test Subject
THANKS POST
#100