by Aligeth Posted 1st May 2008 at 6:05 AM - Updated 29th Aug 2008 at 11:44 PM by Aligeth
12 Comments / replies (Who?) - 11 Feedback Posts, 1 Thanks Posts
This is a new mesh, and means that it's a brand new self contained object that usually does not require a specific Expansion pack (although this is possible depending on the type). It may have Recolours hosted on MTS - check below the description for more information.
What respectable Victorian lady of style and grace would wish to be seen in the same riding habit hunt after hunt, trot after trot, gallop after gallop, canter after...well, you get the idea.

For her ladyship's wardrobe, the seamstresses have been working their nimble fingers to the very bone to assemble a collection of riding habits in not one, not two, not three...well, you get the idea.

Four jewel-toned hues which they have labeled as:

Or to the less sophisticated vocabulary, red, purple, blue and green. 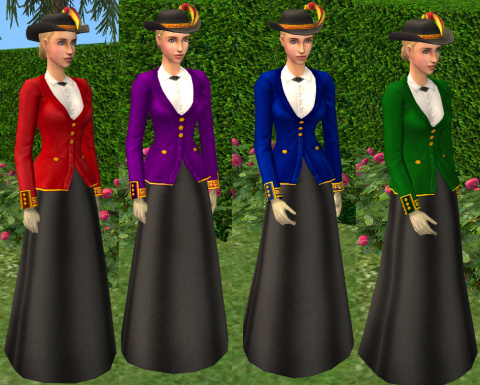 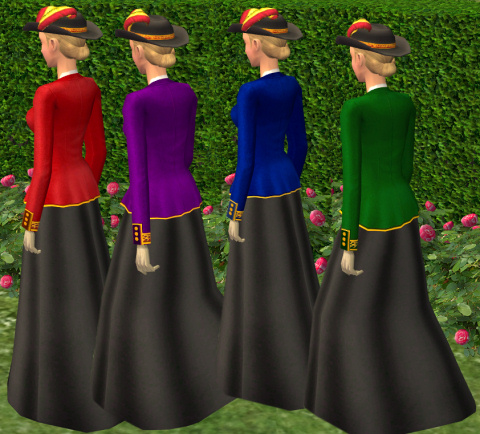 These are jewel-toned recolors of my original mesh and texture which were a part of the Victorian London Challenge Theme project under my title of "Royal Trousseau of Her Majesty the Queen, Victoria", which can be found here:

as well as the jaunty little riding hat, which is not included here, and not recolored, as that would add a considerable number of hairs to do up and add to ones files.

Back to download view
12 Comments / Replies (Who?) - 10 Feedback Posts, 1 Thanks Posts
Hide Thanks Posts for this thread (Show only feedback)
ChibyMethos

LOL I love the descriptions. What a great looking outfit! Is the hat part of the habit as well, or is it an accessory?

Never can have too many Victorian clothes.

Thanks!
"Alas, poor Yorick! I knew him, Horatio."

The hat is attached to a hairstyle, which can be found in my link in the body of the post.
child_of_air
Instructor

These are lovely! Thank you.

They are the best dresses I have seen for this period.
I just love them and shall enjoy them in my Victorian Hood.
Thank You
StephSim

The pictures really do not do your clothing justice. In the game your Victorian clothing are absolutely beautiful. They have a certain je ne sais quoi about them that makes them seem a little more feminine than most clothing. Thank you for sharing these!

Creativity is giving the soul permission to leap beyond the boundaries of the ordinary!
~*~Stephanie~*~
Starfish of Terror

Oh, these are gorgeous! I've been eating up this entire challenge, and your habits are just delicious.

That does sound a little awkward.

Thank you so much!
astrodisneygirl
Test Subject
#11

oh my gosh i want this so badly for my movie but they r rar files!
could u make the GREEN one in zip? i will thank you in my movie! PLZ!
thanks,
Rachie
Never let a computer know you’re in a hurry.
Aligeth
Instructor

Unfortunately, I think the uploading rules don't allow two archived file types of the same stuff. In other words, rar or zip but not both. WinRAR is shareware for 40 days or so though, if you google for it.
123vacuum
Test Subject
THANKS POST
#13

could you make ths for the sims 3 thanks