This thread may have one or more missing files, due to an old fileserver crash. See here for the details. Want to help? See here for details.
Picked Upload! This is a picked upload! It showcases some of the best talent and creativity available on MTS and in the community.
*UPDATE*
Now I have taken better screenshots and I uploaded a new hair for you. It is made on a mesh by XM Sims (http://www.xmsims.com/sims2/ehtm/hair/hair65.htm). I recolored and retextured it for you ^-^

Ayumi Hamasaki, born October 2, 1978, is a Japanese singer-songwriter and former actress. Also known as Ayu to her fans, Hamasaki has been dubbed the "Empress of pop" and "the Empress of J-Pop" due to her popularity and widespread influence in Japan. Born and raised in Fukuoka, she moved to Tokyo at fourteen to pursue a career in entertainment. In 1998, under the tutelage of Avex CEO Max Matsuura, she released a string of modestly selling singles that concluded with her 1999 debut album A Song for XX, which debuted atop the Oricon charts and stayed there for four weeks in a row, establishing her popularity in Japan. 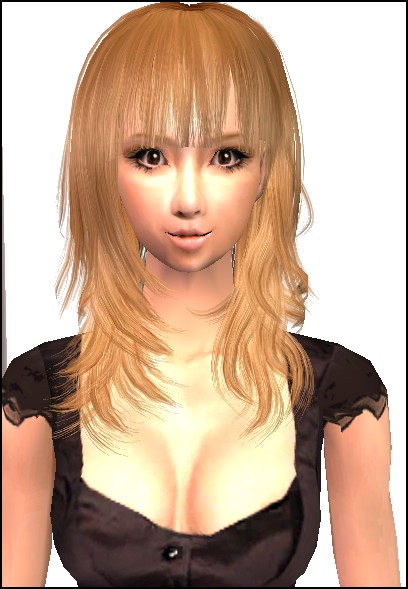 Because of her constantly changing image and tight control over her artistry, Hamasaki has become a "trendsetter" and an "icon of fashion" in Asia; her popularity and influence in music and fashion extend to China, Singapore, Taiwan, and South Korea. She has appeared in or lent her songs to many advertisements and television commercials. Though she originally supported this, a 2001 event in which Avex forced her to put her greatest hits album in direct competition with Hikaru Utada's Distance made Hamasaki reconsider and eventually oppose her status as an Avex "product". 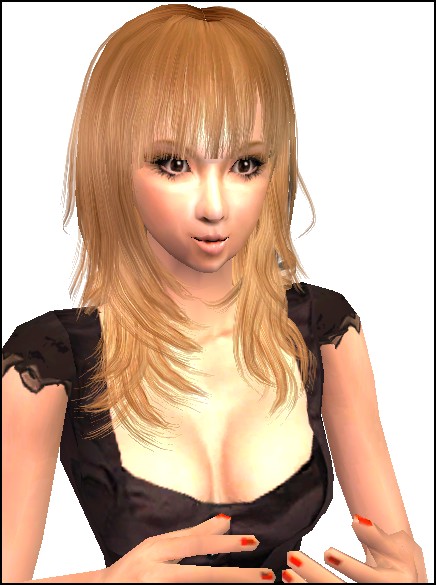 Since her 1998 debut with the single "Poker Face", Hamasaki has sold around 50 million records, making her one of Japan's best-selling singers. Her singles have set records: she is the Japanese female artist with the highest singles sales, most number-one singles, and most million-seller singles. She is also the only Japanese artist to have a number-one single every year for ten years straight and the first to have her first eight studio albums top the Oricon. 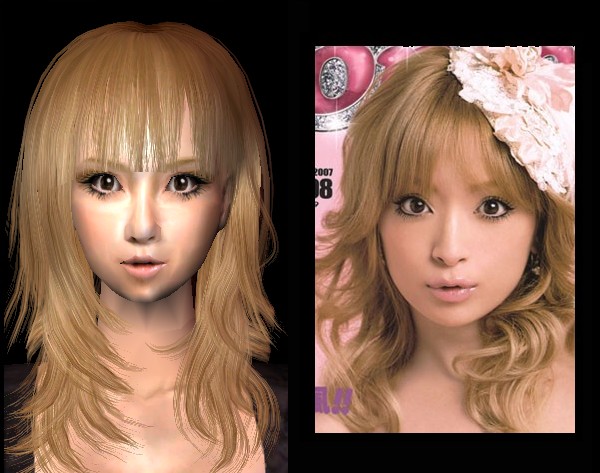 Back to download view
60 Comments / Replies (Who?) - 54 Feedback Posts, 3 Thanks Posts
Hide Thanks Posts for this thread (Show only feedback)
Page 1 of 3
Corylea

She's beautiful! Thanks for telling us all about an important Japanese singer; she sounds like an interesting woman.
I made some mods for The Sims 1 -- yes, The Sims ONE :-) -- which you can find at http://corylea.com/Sims%201%20Mods%20by%20Corylea.html
PinkGirl12

WHAA~! She looks like the real one! Thanks and GOOD JOB!

Wow, the likeness is rather uncanny...she's very pretty. XD Thanks for sharing!
Nyami

WOW! Amazing likeness! Thanks a lot :3
EDIT: For some reason when I load her she's bald and I can't change her hair. Is there any way to fix this?
ScorpioMaurus

Thanks she looks great. I only listen to the male J-Pop and J Rock like Gazette and Gackt but she's fantastic and really looks like the girl. I now see this hair would also work well on a Shion Uzuki Sim. Thanks so much!
My Kuja sim http://games.groups.yahoo.com/group/Sephiroth_Is_A_God/
KokiriChild83
Test Subject
#7

Oh my goodness! Your Ayu is quite amazing. She looks just like the real Ayumi

I had to click on this page because in the little photo I on the main page I couldn't tell which part of the face was the sim and which was the real person. Wow!
What if one little pop could open a world of wonder
So sensory, so satisfying. It's the magic Friskies makes happen every day in so many ways
Friskies, feed the senses. Cat sez eff that, gimme cheezburgers.
BlueOrchid254

wow thats great
looks so alike
did awesome job
thanx
Do you know you're unlike any other?
You'll always be my thunder
So bring on the rain
Oh baby bring on the pain
And listen to the thunder
shmash

wow this is fantastic! And she's is a great artist, however....I prefer Utada hehe but great sim! And sooo dling

I love your Ayu! The Sim is so pretty just like the real Ayu!

I really recommend that everyone should check her music out!
gabbyownsyou

She is adorable! *d/ls sim, and some of her music* hehe
PoofyPoof

You don't have the hair mesh.
mistress_moo

I love her great job! I love Ayumi's music it's great.
Come see my creations at evielovesims
KillingSpoon

Woah... I have not logged in for quite some days and now I see this many comments. Thank you very much for them^-^
Ilovesims2andanime

Nice job!
The worst way to miss someone is when they are right beside you and yet you know you can never have them.

So pretty! Thank you

Oh my GAWD! I can't believe how much she looks like her! ^_^
I've downloaded a total of two female sims, lol...Every time I try to download a guy, it says "I need an expansion pack". O_o I really wanted to download Orlando Bloom! D:
Whassup wif dat? :P
Sango_91

Hmm... try to install your sims with the Sims2Pack Clean Installer, that should work.
Smellaroni

oooo maaa god. When I saw the photo in the preview area, I couldn't tell which was real, and which was the sim!
Has anyone seen the phone books, I'm ordering pizza
fatkidmovies.webs.com
youtube.com/dlv287
Cruxshadow

but THIS...just makes me so happy!!