Multiple Pollination Technicians - with or without custom genetics

by Widget97s Posted 6th Sep 2008 at 1:09 PM - Updated 27th Jul 2012 at 12:09 AM by Widget97s
76 Comments / replies (Who?) - 25 Feedback Posts
I’ve been using Fwiffo’s second multiple pollination technician hack for ages but the more alien births I had the more unsatisfied I became. It wasn’t that the aliens aren’t pretty, far from it, they just aren’t my style – they stick out like a sore thumb in my ‘hoods and not in the right way. I wanted aliens that would look like aliens but still have the same feel as the rest of my sims, after looking around for a while I realised that the only way I would get this would be if I made my own, something I ruled out having never made and custom content before.

Then I found this fantastic tutorial by Simgaroop and decided to give it a go.

I've made four aliens that match my own personal style and given each of them exaggerated features that make them stand out but should still mesh well when bred (at least they do in my game - see attached images for examples). There are two variants offered here, one which uses custom genetics and one that only uses the default skin and eyes.

The first version (the one I'm using) consists of one P.T. that uses the default skin and eyes (shown using my default replacements) and three that use custom skin and eyes: 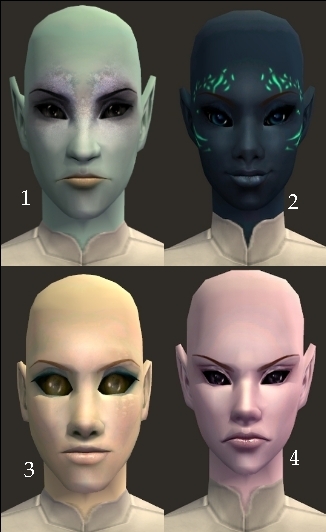 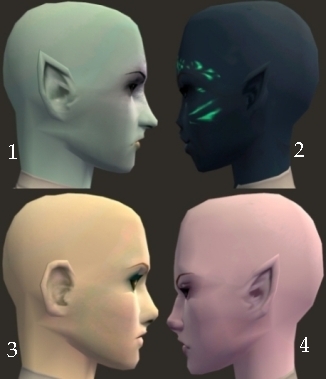 2. Has brown hair, a very flat nose, recessed chin and small pointy ears, she reminds me of a fish from the side.

Important - the custom genetics are not included, you must download the files linked below for this to appear as shown
Blue skin – Zoen’s skin
Ivory skin – Ivory tattooed you can also find it here (probably easier to get the right skin)
Purple skin – Purple skin the skin is no longer avalible in the main post, but has been reuploaded and can be found here
Eyes – TSR Sets > eyes > Space oddity, you need MajorBlue, Offbeat and Izmir

Alternatively you can have a version that only uses default skin and eyes, the face sculpts and hair colour used are identical to the first version. 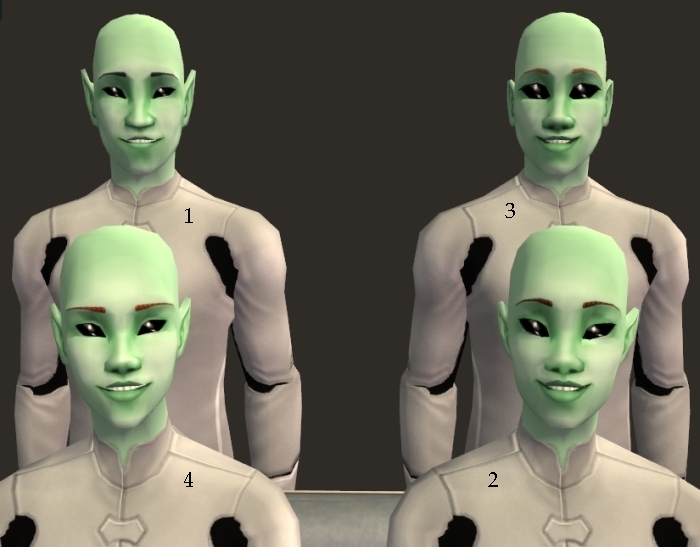 Recommended files
Which ever version you choose I recommend you download Theo's Unlock alien eyes for all skintones so that the alien eyes will show on all skintones
I also recommend you get some alien eye contacts for your teen's otherwise they will show with the eyes painted on the skin which looks pretty strange, I use these but there are others available.

Remember you can't have more than one of these mods at the same time so remove or disable any other multiple pollination technician hack you might have, you don't have to remove the PT files though.

Additional Credits:
Fwiffo for the original mod and the kit that made creating this so much simpler
SimPE
Simgaroop for the very user-friendly tutorial
Default alien skin by Pooklet at Garden of Shadow
Default alien eyes by Skittlebox on livejournal
Tags: #alien, #aliens, #multiple, #multi, #pollination, #technician, #hack, #default, #replacement, #modification, #polli, #tech

Back to download view
76 Comments / Replies (Who?) - 64 Feedback Posts, 8 Thanks Posts
Hide Thanks Posts for this thread (Show only feedback)
Page 1 of 4
Simgaroop

That's a very nice set! I like how their noses and ears are all different (something you wouldn't notice with just a front picture). I think my favorite is "fish-looking" girl

I'm dowloading the no CC version for my game, thanks!

Thanks for the link to Kangagroop's tutorial. I'm going to have to try this myself. You've done a very nice job on these.
matheusfb

Amazing job!!! They're just awesome!
So then I said to the gentlemen:
"Prognosticate? I thought you said promisitate."
ViolationOfVampires
Test Subject
#5

I've just finished downloaded the CC-ones, so look forward to seeing how those genes spread in my future Legacies! :D
MartaS650

I love how unique these are! Great job! And by the way, thank you for the cc-free ones, I download so much I have to cut down where I can

Where can I get your alien default replacement? (and is it barbie or non barbie?)
Widget97s
Test Subject

My alien skin default is from Garden of Shadow by Pooklet - here. The female skins have nipples but other than that they're the same as Maxis skins in terms of details.

Is it safe to just take one of the PTs instead of all four?
Widget97s
Test Subject

Sorry no, if you want to use this mod you need to have all four, it won't work with only one.
Sinery_kate
Test Subject
#12

there is a poblem! i download everything i suppose to have but it still does not work. The skintone is still default and some like human more than alien. Is there any fix to it?
(i using base game and i have window vista)
Widget97s
Test Subject

If you downloaded the version with custom genetics you have to get the linked files and put them in your download folder otherwise the custom skins and eyes will not show.

Does this happen no matter which PT is used as the parent or only some of them?

By more human than alien do you mean the facial features? You may be just getting unlucky (but the skin and eyes should still show), do the PTs show up on the family tree correctly?
KamikazeSkunk
Test Subject
#14

Wow.. I downloaded the CC version, and now my sims2 game won't even load up.

As soon as I took it out of the folder, it worked fine.

Anyone else having problems like that? I'm going to try the No CC version, but I wanted the different skins..

I downloaded all the skins and eyes you posted, the orangy one.. number 3 I already had the set.. I think.
I also have all the expansions.
Widget97s
Test Subject

KamikazeSkunk, would you mind trying to load your game with only the five file in this hack in your downloads folder.

If it works then the hack is conflicting with something else, if it still doesn't work then there's something wrong with the hack.
Ludov
Test Subject
#16

out of curiosity, how do these behave with "creature" sims such as zombies/vampirse/werewolves when changed into one of those?
Widget97s
Test Subject

Hey! I just downloaded these to see if they'd work. It didn't crash my game at any point during loading. I went into Riverblossom Hills and made a new Sim to experiment o--er, play--a male Knowledge Sim with all normal Maxis genetics. (He has tan skin, red hair and green eyes--and a geeky outfit and glasses, of course.) I figured if I used custom stuff, there's a chance one custom skin might overrule the other and I could get alien kids and STILL not know if the new PT's were working.

Then I used boolprop to get him abducted, and now...

I'd like to introduce you to little Adric...AND Nyssa (!! my first pair of alien twins...), who both have the fourth PT's skin and eyes, (Nyssa has the pointy ears, Adric doesn't) and their father's red hair!

In other words, it worked.

Glad to hear that it works for you

hi! i'm slow. i love your pt's they are so cute, and just what i was looking for. diversity! still i have two questions.

1. if i didn't want one of the pt's to have the custom skin color, like #1 for example. and i just didn't put it in my game, that pt would end up having whatever my alien default is right?

2. basically the same question for the eyes. i'm a big fan of my default eyes, so if i didn't want them i just don't download them right?

i love what you did, just the eyes are a little too exotic for me, and i don't like the first skin. i think i actually have all 3 of the other ones already...

anyway, thanx in advance for your help, and thanks for making em!
anti-social :-D
Widget97s
Test Subject

PT#1 actually uses the default alien skin, the skin you can see in the picture is my default replacement.

thanks widget. i'm gonna use the non-cc version then, cause they're just too cute to pass up! thanks for getting back to me, and thanks for making them. you did a great job once again.
anti-social :-D
grammapat

eye site?
Managed to find everyting (with difficulty) EXCEPT MY FAVORITE - the purple skin: the link go to another site, then another - which is a hosting site with no further directions. HELP?!
CrosscutJERP
Test Subject
#24

Widget's Multi PT set.rar is the file you want for the custom genetics.
When you used the link to the eyes, click on TSR sets (top right) and get the space oddity ones from club crimsyn.
For the purple skin tone use the link, then scoll to bottom of first post where it says 'you can download them here' click on that link and on the left side it says 'click here to start download' click on that.
For the ivory skintone use the link, then scroll to bottom of first post, click on the link next to skintones, and theres an orange button that says "download file' click on that.
and lastly for the Blue skin the skin you want is the first file: 1a23735e_!!Zoen's_Skin!!.rar

btw Thanks Widget great job on these