Audrey Hepburn - As seen in Breakfast At Tiffany's 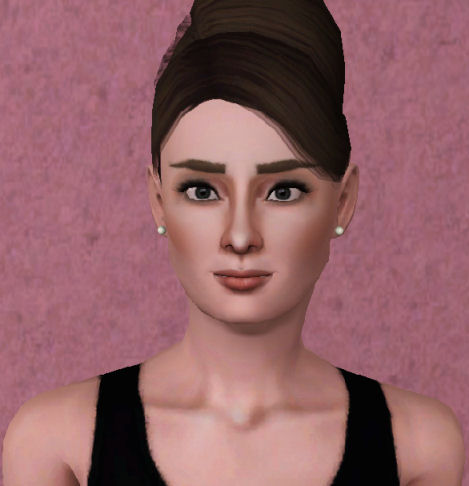 I have been a huge fan of Audrey Hepburn since I was a young child. When I was 14 I came to the conclusion she was my utmost favorite actress. When I was 18 I started trying to incorporate the essence of Audrey into my fashion sense. Every time I see an image of her I become completely entranced and melt. She's got to be one of the, if not the, most beautiful beings ever to grace Hollywood. She was beautiful inside and out, too. Audrey was a humanitarian and a wonderfully graceful woman. Anyway...on to my download. 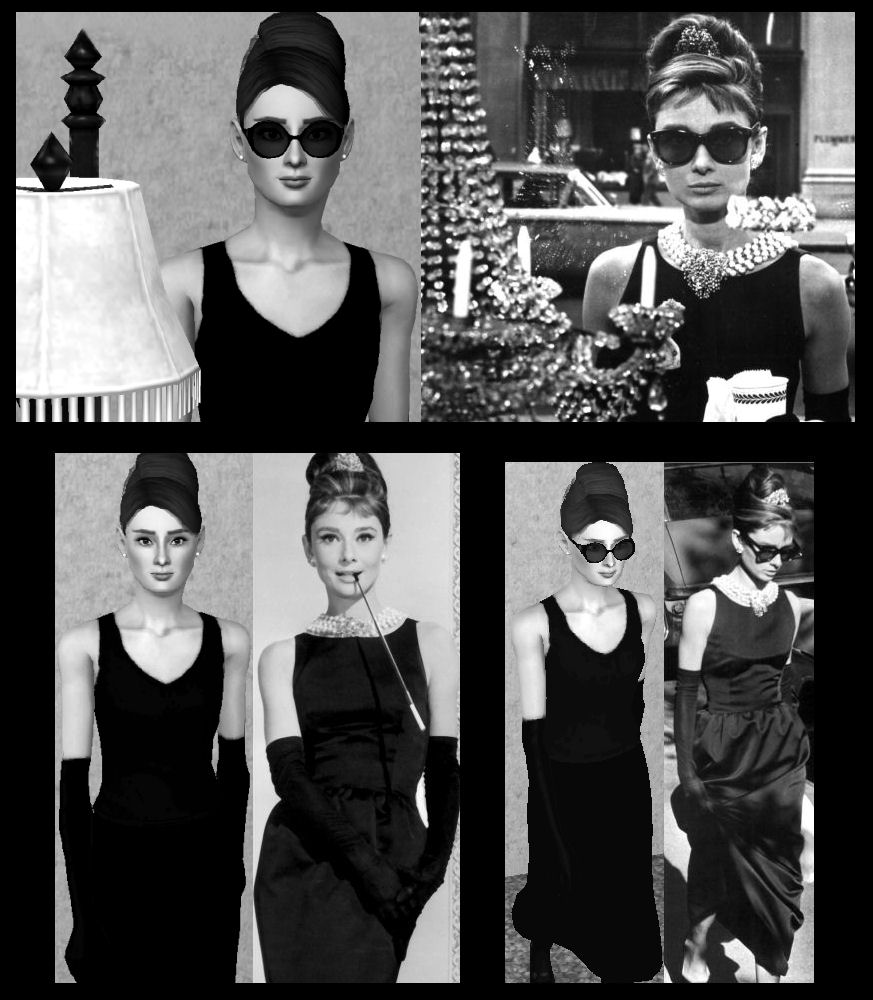 So this download is inspired by Ms. Hepburn's performance in the romantic classic Breakfast At Tiffany's. One of the most iconic movies in the history of American Pop Culture and one of my fav's. 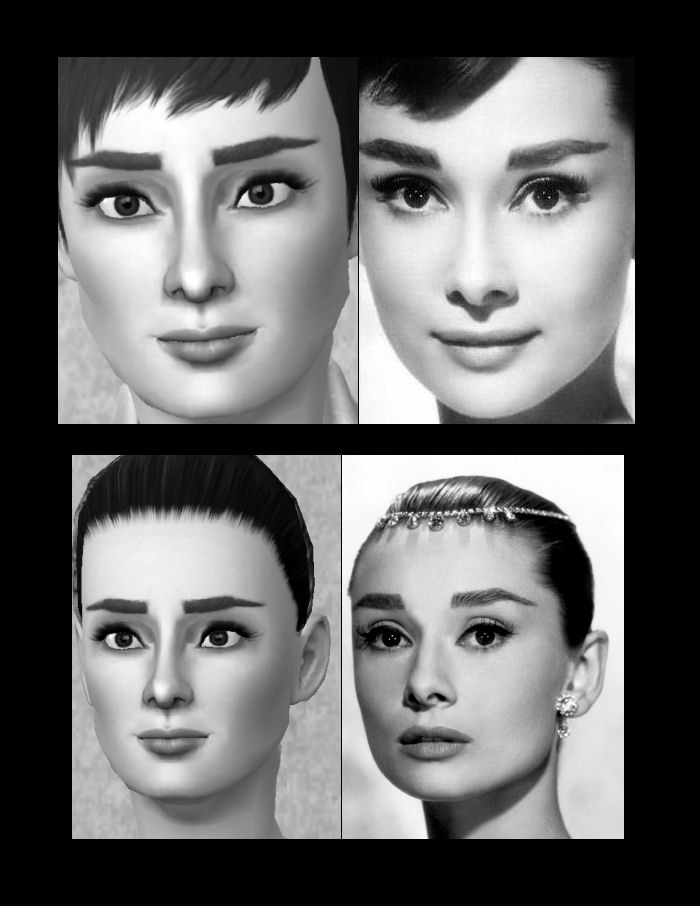 So her traits are as follows:

And her favorites are:

I did some research and although Audrey's best known for revolutionizing "the little black dress" and black is the color most associated with Audrey, her favorite color was actually white! And the Spaghetti thing is a bit inaccurate...her favorite food is Spaghetti Al Pomodoro, which is a dish with basal and carrots. But that's the closest I can get!

Her lifetime wish is to be Star News Anchor 'cause I was too lazy to try for something better. By all means, adjust to your liking.


Alright, I want to make a super special shout-out to Mermaid_Bellamy! She is the reason why Audrey has the perfect eyebrows! She also has helped me with a lot of other things, without me even asking! So I just want it to be known that Mermaid_Bellamy is the greatest! Not to mention the nicest person I've ever had the pleasure of corresponding with.

So THANK YOU SO MUCH!

I'm using the slider hack by Rick&Delphy, skin by Aikea, eyes by HP, eyebrows by Mermaid_Bellamy , which have been included in this download, lipstick by Papercat, formal wear dress by Liana, and both custom hairs are by Peggy. Is the hair photo attached, it is the second hair from the left and the 4th hair from the left, both can be found here.

EDIT: I forgot to mention, I am also using Delphy's boob slider. I didn't do a lot of adjusting...but if you want her to be exactly as I intended then you'll want to get all of his sliders from that thread. 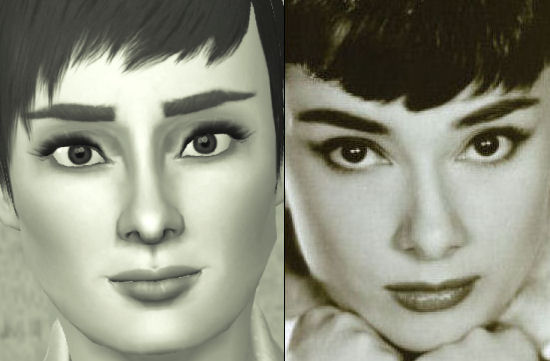 Additional Credits:
Thank you to everyone from the creator feedback forum, all your input has been so appreciated! A particular thank you to Wicked_Poppies and EsmeraldaF for all your many comments and helpful tips! You guys rock!
Tags: #Audrey, #Hepburn, #Audrey Hepburn, #Old Hollywood, #Starlet, #actress, #Breakfast At Tiffany's

Back to download view
31 Comments / Replies (Who?) - 27 Feedback Posts, 2 Thanks Posts
Hide Thanks Posts for this thread (Show only feedback)
Page 1 of 2
ph0bia
Test Subject

oh wow she's stunning! you did such a wonderful job!! She looks just like her ^_^ Thank you!!
justavc21
Test Subject
#3

Beautiful! You did a great job she looks so similar. This is my first sim download I love it. Thank you!
Jessica_2020

Great job on her! She looks just like the real Audrey!

Finally, she's up!!! Great job on showcasing her SWC. She looks lovely.
I feel honoured, a Spanish magazine wants to feature my Desperate Housewives and Will Smith in their feature on celebrity sims.
FREEDOM_55

Yay you uploaded her! And shes the best Audrey hepburn I ever seen!
I know you put so much hard work into her and she is definately deserving of picked or feature. amazing job!
Esmeralda

So pleased to see her up! Very nice work, she looks gorgeous!
monca533

Oh my, SNWC! She is perfect! When i was see her in CF, i was thinking her so beautiful that i couldn't wait to see her here, in downloads. Thank you for more this great job!
My Yearbook
PrinceCharming
Test Subject
#9

I'm glad she was finally uploaded! I can't wait to see some more of your work uploaded on here.
henryV111
Field Researcher
#10

Wow, she's beautiful. This has to be the best Audrey Hepburn Sim I've ever seen.
nene1234

Oh she is SO pretty! It's great she's finally up for downloading!
I have to admit, I hadn't heard much of her before mts =/ but now you've got me more interested in her. :D
Awh you guys made me ink!
Rainncandy


"You with this lovely baby blue/green huge eyes and this evil touch...couldn't be more adorable" - My Vera
ferocitykills
Test Subject
#15

You did a great job. :D
Guardgian

WOW ! She looks fantastic ! Thanks for sharing

Well done!!! She's beautiful and you've got the breakfast at tiffany's look perfectly. Thanks!!

Wow, great likeness! Thanks for all the effort you put into this sim.
I was namend after Audrey Hepburn, so naturally I always felt some kind of affinity for her.

She looks awesome! You did a great job on her SWC!!!

Thanks so much for all the lovely comments everyone...

About "the best Audrey": I personally think all the Audrey's on this site are absolutely phenomenal and unique in their own ways.

I love the name Audrey, myself. I'm considering naming a future daughter of mine Audrey Ilene. Ilene being my grandmother's middle name.

Yo', I'm on Yearbook now, check me out and leave me some lovin's!!!
Audrey

I have always hated my name. Funny that.
I feel honoured, a Spanish magazine wants to feature my Desperate Housewives and Will Smith in their feature on celebrity sims.
s2Wennie
Test Subject
#22

Hey, quick question for ya. This sim is supposed to load in your pre-made sim bin right?

Because I love this sim but she's not showing up.
SnowWhiteCharming

This message has been deleted by Dr Juice Box.
kace021
Test Subject
#25