by Claeric Posted 20th Feb 2010 at 11:22 PM
24 Comments / replies (Who?) - 22 Feedback Posts, 1 Thanks Posts
Somewhere in Sunset Valley rests an old rest stop. The paint is chipping off, the benches and trash cans and doors are rusted, and it has gotten so bad that a chain fence apparently had to be erected around the building. 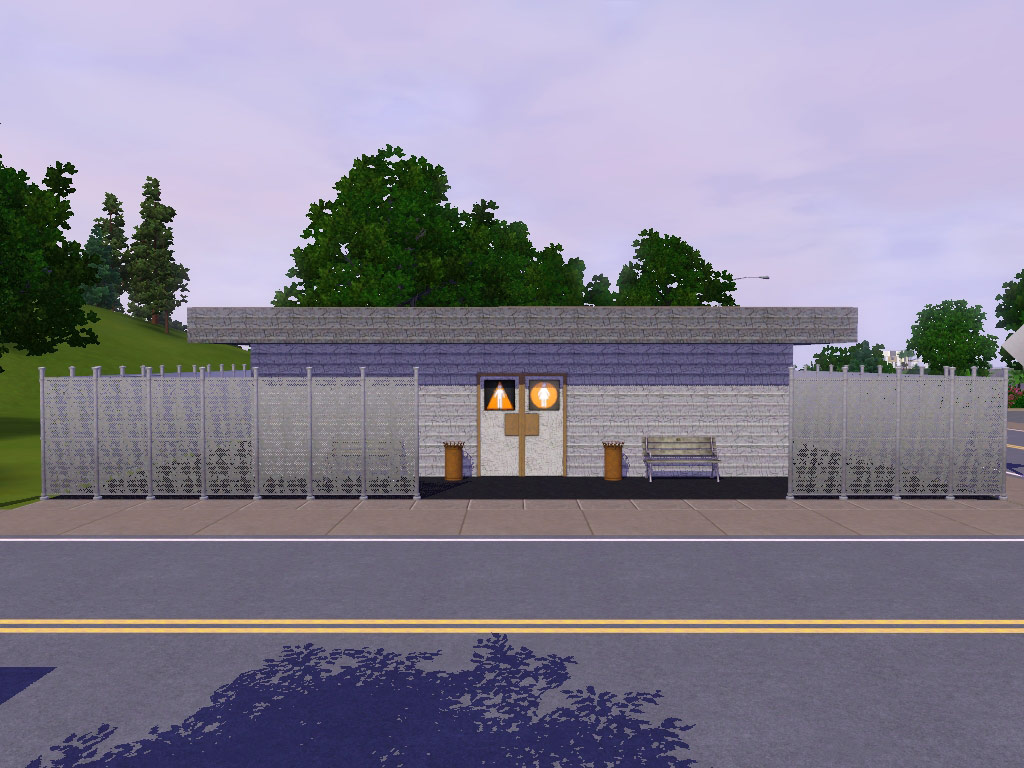 There's a huge gap in the fence, though...which scares people. No one would dare go into that disgusting bathroom to begin with, but with signs of a break in? No way!

Hidden away inside the restroom is an arcade that, under the cover of night, becomes filled with teens and adults who wish to get together and GAME. Party lights, party furniture, expensive high-tech equipment, and a rave-style atmosphere drive their gaming desires!

Come and play PC games with your friends! No screenlooking! 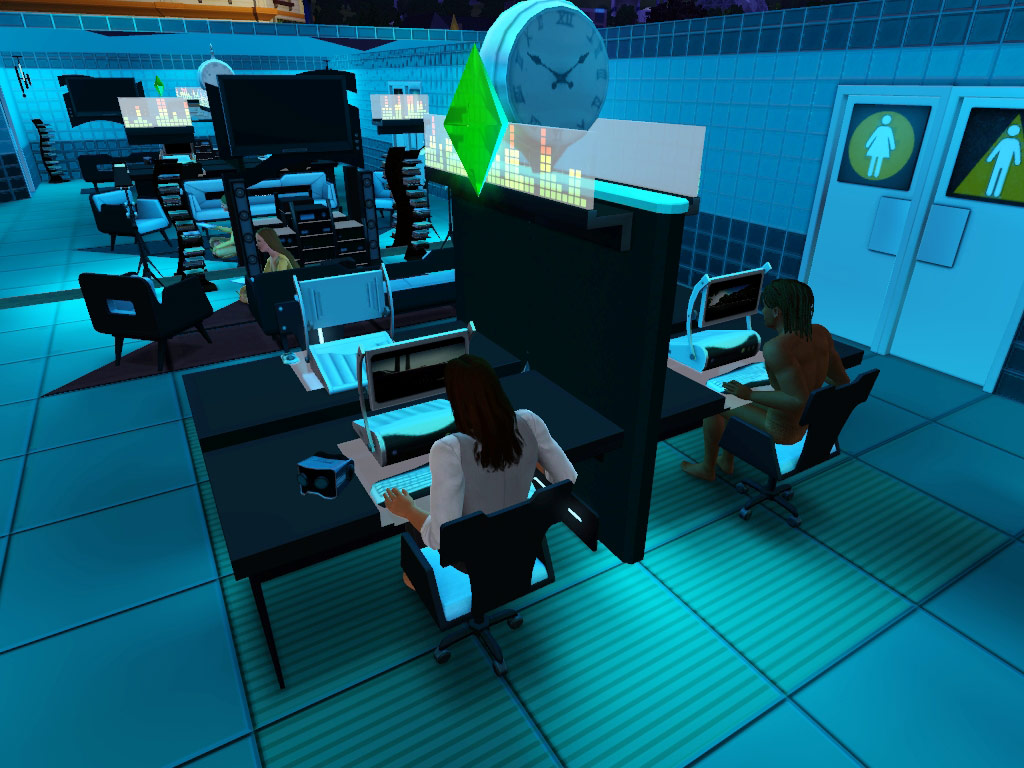 Have multiplayer parties on one of THREE consoles! Marvel at the framed guitar of the greatest SimGuitar player of all time! 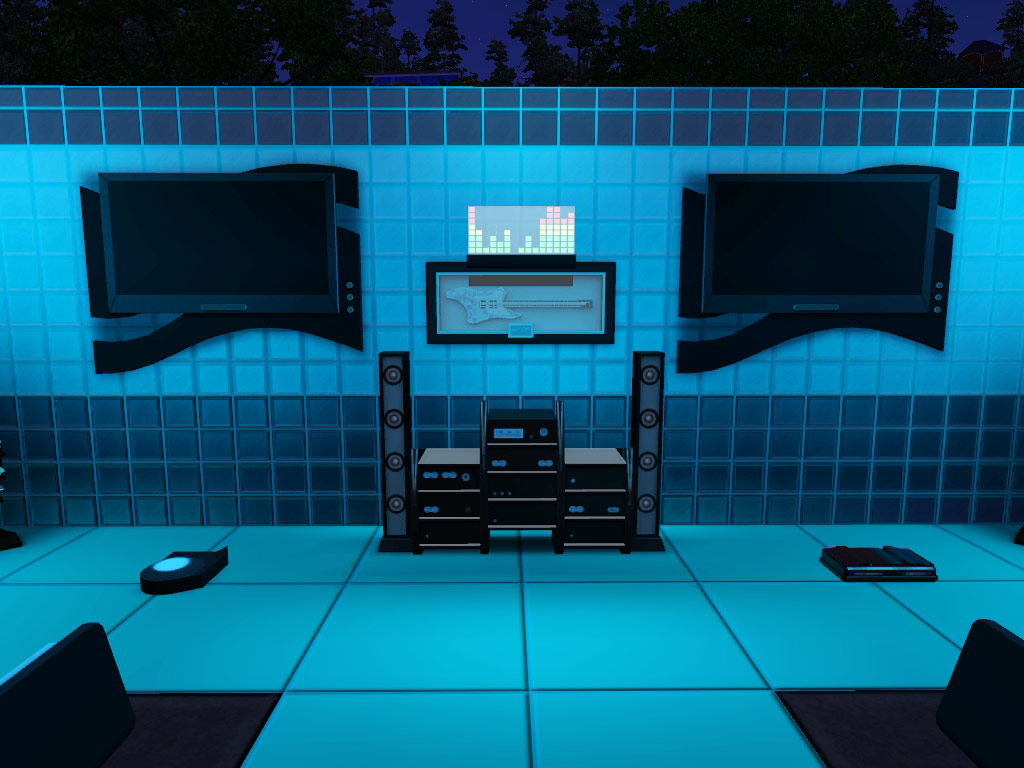 Or just become dazed by the disorienting lights, sounds, and mirrors! Watch as your friends sob as you beat them in various great games! 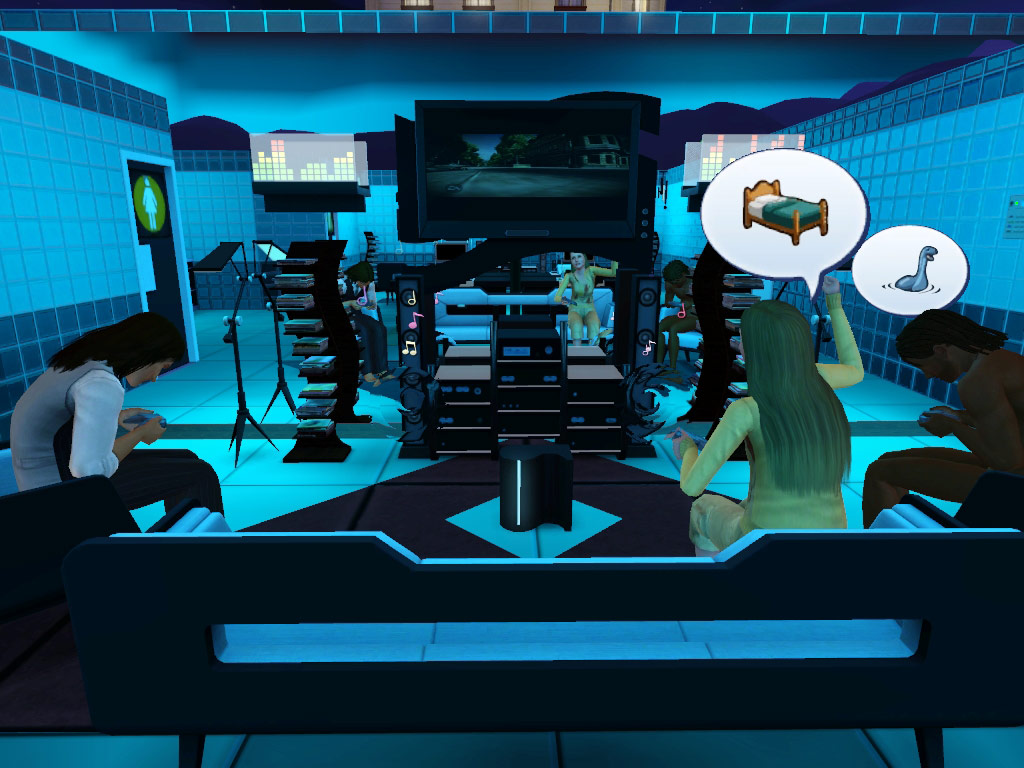 And there's even VR goggles and a coffee bar for when you need that extra burst of energy!

This lot was basically built to showcase HELS objects. The desks, chairs, couches, armchairs, game systems, TVs, stereos, toilets, deco, sinks, and lights are all HELS objects. The lighting in the arcade may be too much for some people, but if it is, you can just change it. It is supposed to be disorienting, like a club or a rave.

Lot size is 16x18. I built it where the bistro was, but it's probably better suited to be on a beach or off towards the highway leaving town. Depends on what town you use, too. It's small so it'll fit anywhere.

Built with Game Version: 3.1.7
Key: - File was updated after upload was posted
Need help with downloading or installing content? Click this link!
Don't forget to Thank the creator after downloading! Use the Thanks button located above the screenshots above.
Quick Guide:

If you need more info, see Game Help:Installing TS3 Packswiki for a full, detailed step-by-step guide!
Back to download view
24 Comments / Replies (Who?) - 21 Feedback Posts, 1 Thanks Posts
Hide Thanks Posts for this thread (Show only feedback)
whitewaterwood

What a cool idea. Nice decorations as well.
Nintendork Island | Please call me WWW!| Despite what avatar says, loves all of mts <3

This message has been deleted by non!.
DaveyDaVinci

Awesome. Needed a good hideout. Thank you
No, u can't haz cheezburger
Esmeralda

This is a really fun and unusual idea, nice one!
AyameS

I don't have HELS either but you have given me a great reason to get it!
JayElleBee
Test Subject
#6

Is it weird that my favourite part of this is the floor? D: I need to by HELS... *angst*
Claeric

Heh, the floor is just the plain linoleum tile. Not counting the floor under the computer chairs.
candlelight82

wish i had HELS
bluegenjutsu

Looks like a cool place for simmies to play. Thanks for sharing this!

Very cool, gonna DL it now and check it out......my only question is, is that black dude in the screenshots naked??? lol either way very cool place, hope to see more from you.
Claeric

Nice! This almost makes me want to get HELS! Almost...
rubywyld

Excellent! I tried making my own gaming center/bar but I love your layout much better. Thank You!
Simmiller

Masterful. Just one more reason for me to get HELS.
queenraven

This is the first time I have really wanted to get HELS! It looks great!
DeformedDarlings

haha I wish this place was real
ucaree
Test Subject
#19

Thanks! I've been looking for a 1X1-2X2 community lot for my the custom world I'm playing. This is perfect!
James411
Lab Assistant
#20

Its perfect but I wish there were Pinball Machines with Arcade Machines like in The Sims 2 where we could have snooker tables also.
DreadWizardDM

Brilliant! I love the design and the simplicity of the concept. It will integrate nicely into any hood! Going to download this right now

This was a truly wonderful idea. I'd like to make a suggestion, if you have the time--an old rundown barn or warehouse that's actually a rave.
lazzybum

I wish I had my own secret gamer hideout like that haha. Definitely downloading this. Thank yous!
debbycanty
Test Subject
THANKS POST
#24

Thank you. I love this.