by iCad Posted 5th Jun 2011 at 8:35 PM - Updated 3rd Jul 2016 at 5:28 AM by iCad
10 Comments / replies (Who?) - 1 Feedback Posts, 9 Thanks Posts
This is a Maxis Recolour which means that it is a recolour of an item that already exists in your game. Please check the Expansion pack requirements to see which game pack it recolours.

Picked Upload! This is a picked upload! It showcases some of the best talent and creativity available on MTS and in the community.
EDIT 7/2/2016:
I dunno if anyone ever still looks at this download, but just in case... I thought I would mention that I finally updated these recolors to be compatible with tbudgett's double-sided version of this window and all their slaved meshes. And now I've finally gotten around to sharing it. It's on my Tumblr over here: http://dramallamadingdang.tumblr.co...window-recolors If you don't use the double-sided versions, though, this older version is still the one you want.

I use this window a lot, mostly because of tbudgett's wonderful completer set, which you'd be well advised to download if you haven't already done so, so that at the very least you'll have doors that match this window. (Gotta love EAxis and its propensity toward creating a very nice window that has absolutely no matching anything.

) Anyway, here they are, same colors as the others I've uploaded: 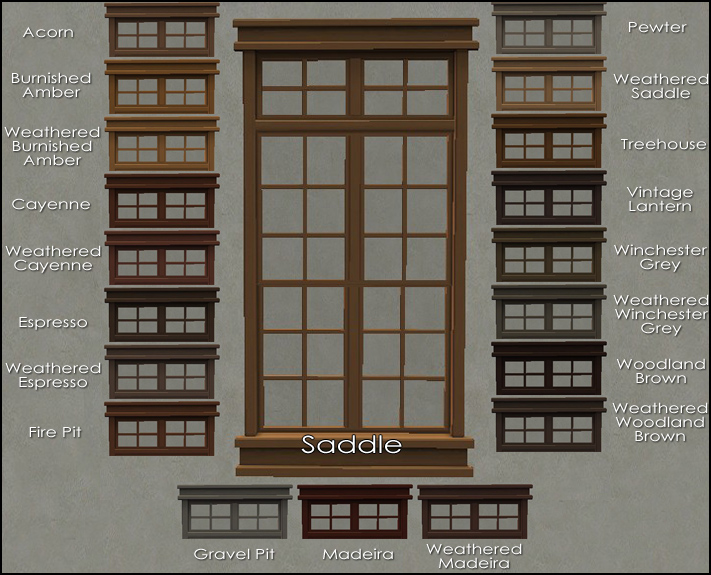 I took these particular pics on the shaded side of a wall this time, so that the colors wouldn't be washed out by the sun. In the other sets I've uploaded so far, I took pics on the sunny side of the wall, so looking at the other windows I've recolored will give you a good idea of what these will look like in full sun.

Meanwhile, here's a sample exterior and interior, using the Woodland Brown color, the darkest color in the palette: 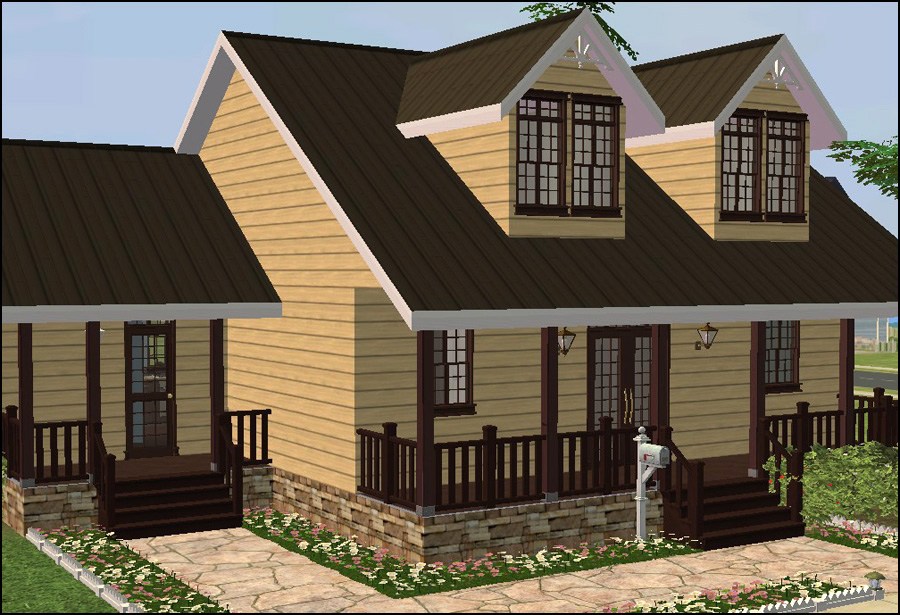 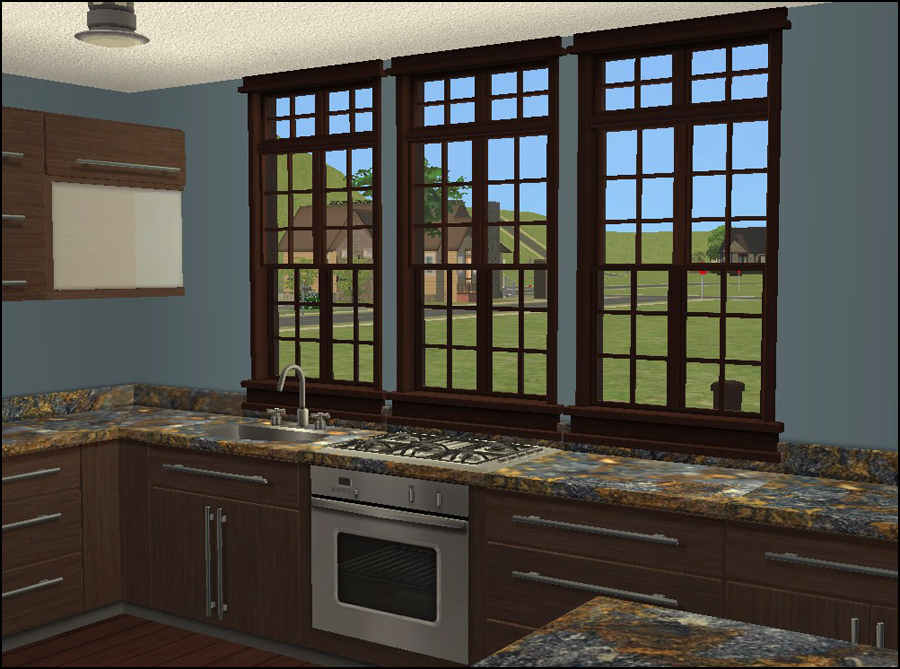 For those who might be curious, and because people always seem to ask me when I don't think they will, have some credits:

The roofing is also mine, and if you're interested in it, you can find it here in 15 colors. (They're not and won't be on MTS due to roof-making-n00b design flaws on my part, which in short make them look yucky on hipped roofs. They look really, really nice on gabled roofs like this, though!) And for the complete look, the siding is the Taupe color of this set, even though it's not really very taupe-y but more tan.

Finally, the stone on the foundation is one of the wonderful sarah*rose's, in this set.

The interior pic, meanwhile, is pieces from Buggybooz's Kitchen Basic set, with the Celestial Blue granite countertop from this set of mine. (Forgive the bit of bluriness on the counters; unfortunately, my aging video card can't render my own creations very well. And they look so nice on my daughter's much-newer computer...*sigh*) The wood floor that you can see a teeny bit of is also from my set of wood floor recolors.

As always, the files are all Compressorized to be as small in file size as possible. The files are also clearly named so that you can easily discard the ones you don't want/need. I hope that these will be useful to you in your own building endeavors.
Tags: #maxis recolor

Back to download view
10 Comments / Replies (Who?) - 9 Thanks Posts
Hide Thanks Posts for this thread (Show only feedback)
marie2sims
Lab Assistant
THANKS POST
#2

I snagged these off your new website yesterday. The whole project is wonderful. I'm looking forward to more and more. I've selected eleven of the colors, and have gotten everything you've recolored in those eleven shades, so I can finally make stuff and have it match. There's a whole lot of stand-alone coloring in this game, which makes it very difficult to build anything. I waste a lot of time trying to find stuff to fit together, and this project is such a benefit. Thank you!
ShadowNut
Test Subject
THANKS POST
#3

Making Maxis better and better. You're my favorite creator by far!

Just wanted to tell you thanks for recoloring all this build stuff. While I tend to use different colors of wood inside a house, I like to have everything match on the outside. And you're definitely making that possible. Thanks again.

Wonderful, as always. Thanks!

Your recolor sets just keep making Simming easier/more enjoyable than ever! Thanks muchly

These gorgeous windows were sitting, untouched, in the build catalog for ages, because the Maxis ones and my terrible shoddy recolors were just too bland/bright/completely clashing for most of the houses I make. Thanks for giving me some more build freedom!
P.S.: Would you ever consider making recolors for Buggybooz' kitchen basics? Just wondering, because I was thinking how awesome your rich wood colors would look on them. Thanks again!
iCad
Undead Molten Llama
THANKS POST

Thank you all, as usual, for the comments and thanks.

I'm glad to help make everyone's building experience more enjoyable. I guess I'm not the only one frustrated by lack of match. Of course, it means having a ton of CC but...Well, honestly, I'd rather have the ton of CC than to be stuck with stuff that doesn't match.

@aypby169: Honestly, I haven't felt a strong need to recolor the wood part of the Kitchen Basic set, mostly because I already have colors, either Buggy's originals or recolors I've downloaded, that go pretty well with my own colors. I did make a bunch of granite countertop recolors, but no, no wood recolors. If you want to give it a shot yourself, though, I can give you the color codes for any of the colors you're interested in. That'll at least give you the color to start with for a recolor.
LadyAngel

I love your recolors!
xiangjiao
Lab Assistant
THANKS POST

Thank you for more beautiful recolors. These are actually pretty nice windows but never really matched anything properly.

I hate to ask this but are there any plans in the work of having these done with tbudgett's newer Craftsman completer set? I nearly use that exclusively because of the ability to do the inside/outside in different colors and I would really love your colors for that.

If not i'll be content with these for awhile