by Audrey Posted 14th Jan 2012 at 4:31 AM - Updated 25th Jan 2012 at 12:47 PM by Audrey
23 Comments / replies (Who?) - 9 Feedback Posts, 12 Thanks Posts
Picked Upload! This is a picked upload! It showcases some of the best talent and creativity available on MTS and in the community.
India Joy Eisley (born October 29, 1993) is an American teen actress best known for playing Ashley Juergens in the ABC Family teen drama The Secret Life of the American Teenager.

Eisley and her mother appeared in the movie Headspace (2005) together. After small roles in various independent films shot primarily in Europe, Eisley gained a major role during the summer of 2008 with The Secret Life of the American Teenager for the ABC Family Network. In it, Eisley plays Ashley Juergens, sister of teen mother Amy Juergens. Her character, Ashley, recently got her GED then left to tour the USA so India can film Underworld: Awakening. 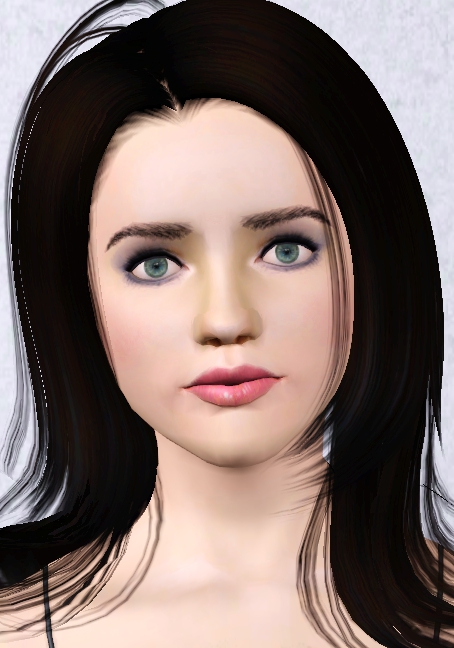 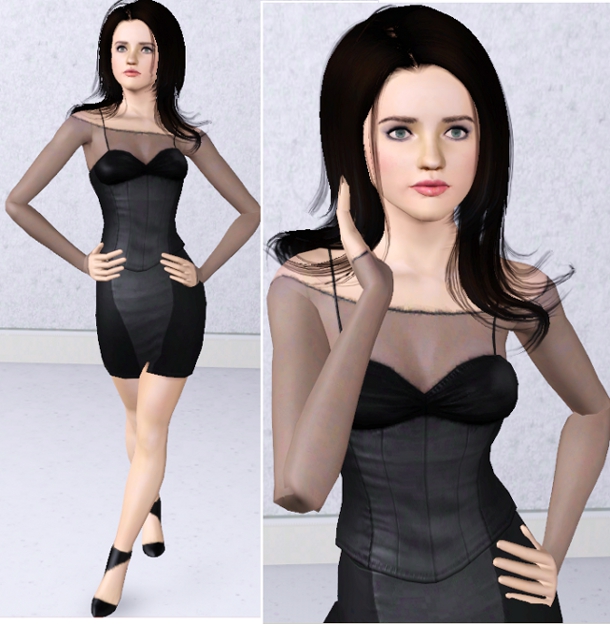 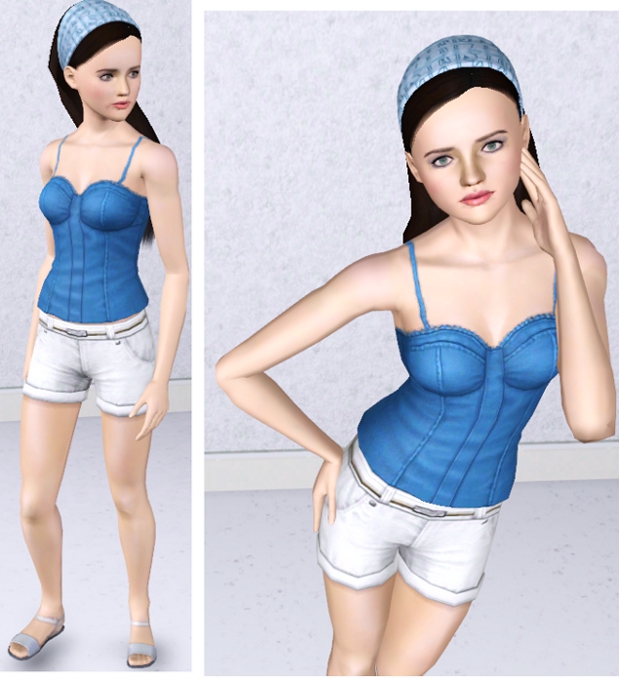 GENETICS
She is packaged with the following default face by Ephemera:HERE BUT the skin in the photos is by Watermelon:HERE
Lively Eyes by Shady (Contacts):HERE
Eyebrows by Elexis:HERE
The hair framing her face is a conversion of Sims 2 Peggy hair:HERE but she is packaged with EA hair which is the hair with the headband.
Ephemera new year collection Eyelashes(E111225eyelinerbase):HERE

SLIDERS
If you would like to tweak this sim you should download the followng sliders. Please don't try to change features without them as this will cause the sim to distort.

Ahmed’s facial sliders: HERE
Head shape slider by Johna:HERE
Heiret's chin to neck slider:HERE or if you can't read Japanese, the direct link to this FREE slider is HERE
Crossed Eyes Slider by BloomsBase: HERE This slider allows you to move the position of the eyeball. It works with default and contact lenses.
Face Sliders by aWT: HERE


Additional Credits:
Thank you to those in Creator Feedback Forum who provided assistance and encouragement. It is most appreciated. Thank you to Leecester who helped me a lot with advice and correct links.
Tags: #teenager, #Eisley, #beautiful, #young, #celebrity

Back to download view
23 Comments / Replies (Who?) - 9 Feedback Posts, 12 Thanks Posts
Hide Thanks Posts for this thread (Show only feedback)
iLoveYoUiLoveMe
Lab Assistant
THANKS POST
#2

I saw your thread at CFF and I waited every single day for this to come out !! I LOOOOOVE HER !!
Audrey
Forum Resident
THANKS POST

I had problems with the links so the mods took her down until I had fixed them. Thank you for your feedback and Alan. Feedback and thanks are the lifeblood of a creator.
iLoveYoUiLoveMe

Quote:
That explains everything !

Wish someday I would learn to do something like that...

I bring forth a message from The Sims 3 page:

"You nailed the eyes and eyebrows, but the nostrils need to be a bit bigger and the same gor the lips. You did a great job though "

"In my dreams you're touching my face, and asking me if I wanna try again with you."

This message has been deleted by iLoveYoUiLoveMe.
Talia19
Test Subject
THANKS POST
#5

I love her I was wondering if you could make her sister Amy Juergens from the Secret Life of the American Teenager. Please and Thank you
Simmiller
Rabid Recoloring Renegade
retired moderator THANKS POST

Audrey you are amazing! This sim is perfect. Congratulations on the star, my friend. You deserve it!
Audrey
Forum Resident
THANKS POST

Thank you iLoveYoU for that message. I realise that her mouth corners should be down a bit more. Not sure I agree about bigger nostrils. Does the writer mean holes or fleshy part? I hate going onto Sims 3 as I have been savaged in the past so not going there.

Talia, I already have so many requests for other sims. I will take a look at her and let you know.

Thanks Simmy, your appreciation means a lot to me.

Heck, don't let that bother you Audrey. Your sims are getting better with every upload.

Probably nothing to do with you, but I tried to download some of the CC and Mediafire tells me the files are set to private. (Everything I tried from Candy Lover and everything I tried from the site you linked to for the skin. I think I got the skin from an alternate link on that site but I'm not entirely sure it's the right skin.)

She's a really pretty Sim. I have no idea who the actress is, but I'm downloading her anyway. (:
Audrey
Forum Resident
THANKS POST

Hi pantherprincess, I really don't know why the blush is set to private. That is so annoying, however, it will not make a huge difference to her look if you use another blush. Yes, the skin you downloaded from s-Club Prive by Watermelon is the right one.

I hope she looks good in your game.

Oh Audrey, she is gorgeous! Thank you and congrats!
iLoveYoUiLoveMe

I guess he meant the holes. But she's perfect anyway.

"In my dreams you're touching my face, and asking me if I wanna try again with you."

She is gorgeous! Great work

The skin tone from watermelon is set to private for downloading

I will attach the skin file the downloads.
I feel honoured, a Spanish magazine wants to feature my Desperate Housewives and Will Smith in their feature on celebrity sims.
Yogi-Tea
Inventor
THANKS POST

She's perfect - you really did a great job on her - very beautiful.

Audrey I've tagged this upload as you are providing cc that has a specific policy of not including. You will have to remove that download and just link to it.
Life Stories | EA Sims 2 Store Items | EA Pre-Order Incentives | Pet Stories | Dog Agility Items﻿ | Castaway Stories  | Holy Simoly Add-ons | Overrides and Defaults
4esf Archive | Holy Simoly Archive | Sims2Artists | tumblr | CEP-Extras List
If you enjoy the content on s2a or GoS, consider donating to support hosting costs.
Audrey

Hi HL I didn't know. I found another link to the skin so have removed the attachment.
I feel honoured, a Spanish magazine wants to feature my Desperate Housewives and Will Smith in their feature on celebrity sims.
Kamithea
Test Subject
#20

It such a shame because she look nothing like it in the pictures, many links you provided no longer work or set to private. Such as the following:

This message has been deleted by ArxiDemon. Reason: Guys reload file or give me link to: True blend foundation blush by Candy Lover http://sims3candyloversblog.blogspot.com/2011
ArxiDemon
Test Subject
#22

File No Found
Guys reload file or give me link to:
True blend foundation blush by Candy Lover http://sims3candyloversblog.blogspo...tion-blush.html