I was suppose to upload him 7 months ago,I was working on him for 2 months before,and after 27 different copies clogging up my sim bin,I finallly feel satisfied enough to release him! 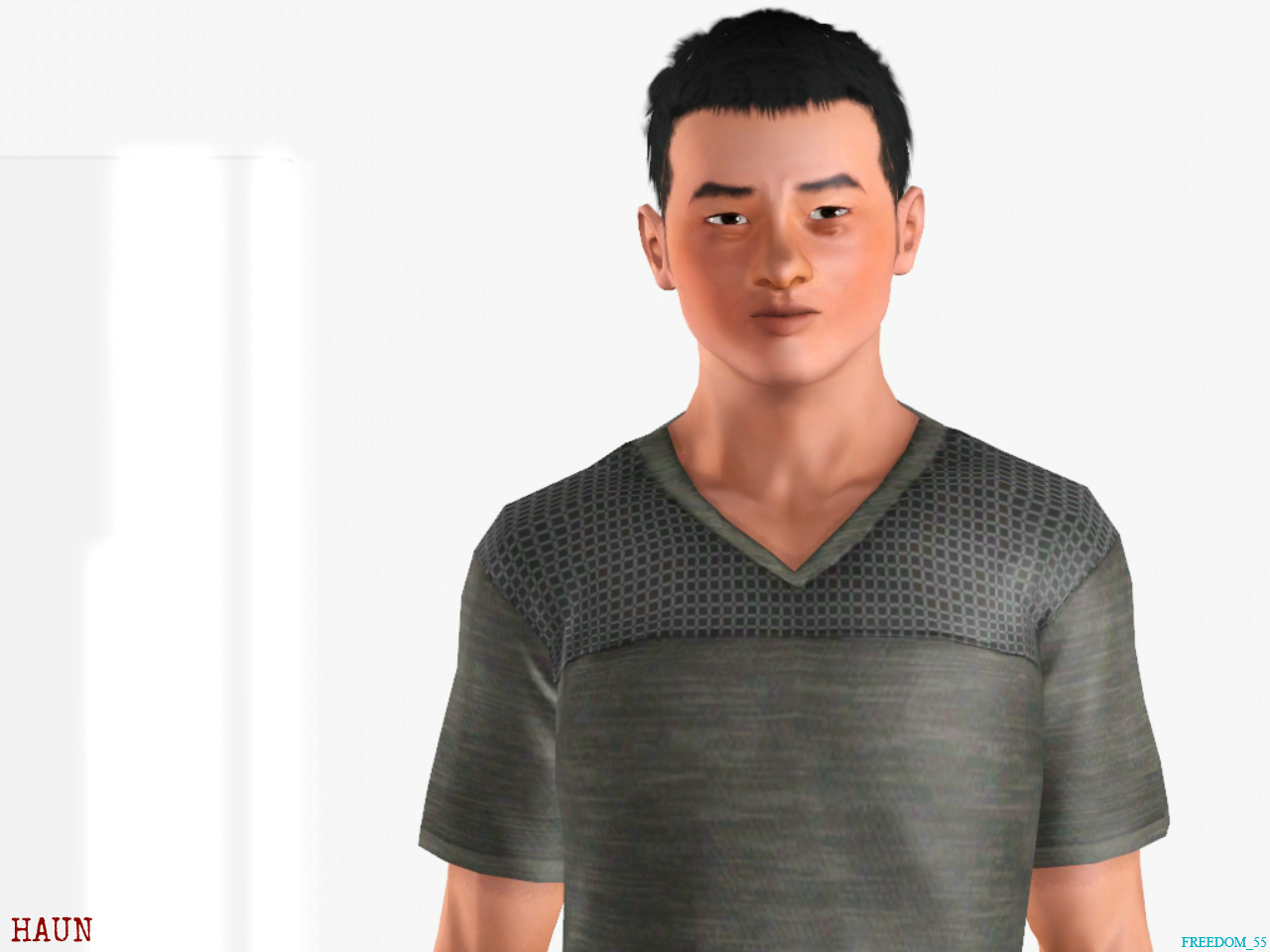 Haun’s tall physique, and quiet demeanor is somewhat intimidating, but his very protective nature extends to his friends earning him a level of respect. He normally does not try to woo girls, although it is rumoured becomes uncharacteristically talkative and flirtatious when he is tired. Huan 's hobbies include kendo, karate, shooting pool ,and his love for cars. He works as a mechanic by day and drives getaway vehicles for armed heists by night. Underneath dour and taciturn attitude lays a young man that is very devoted and loving towards his family and those he considers close friends. 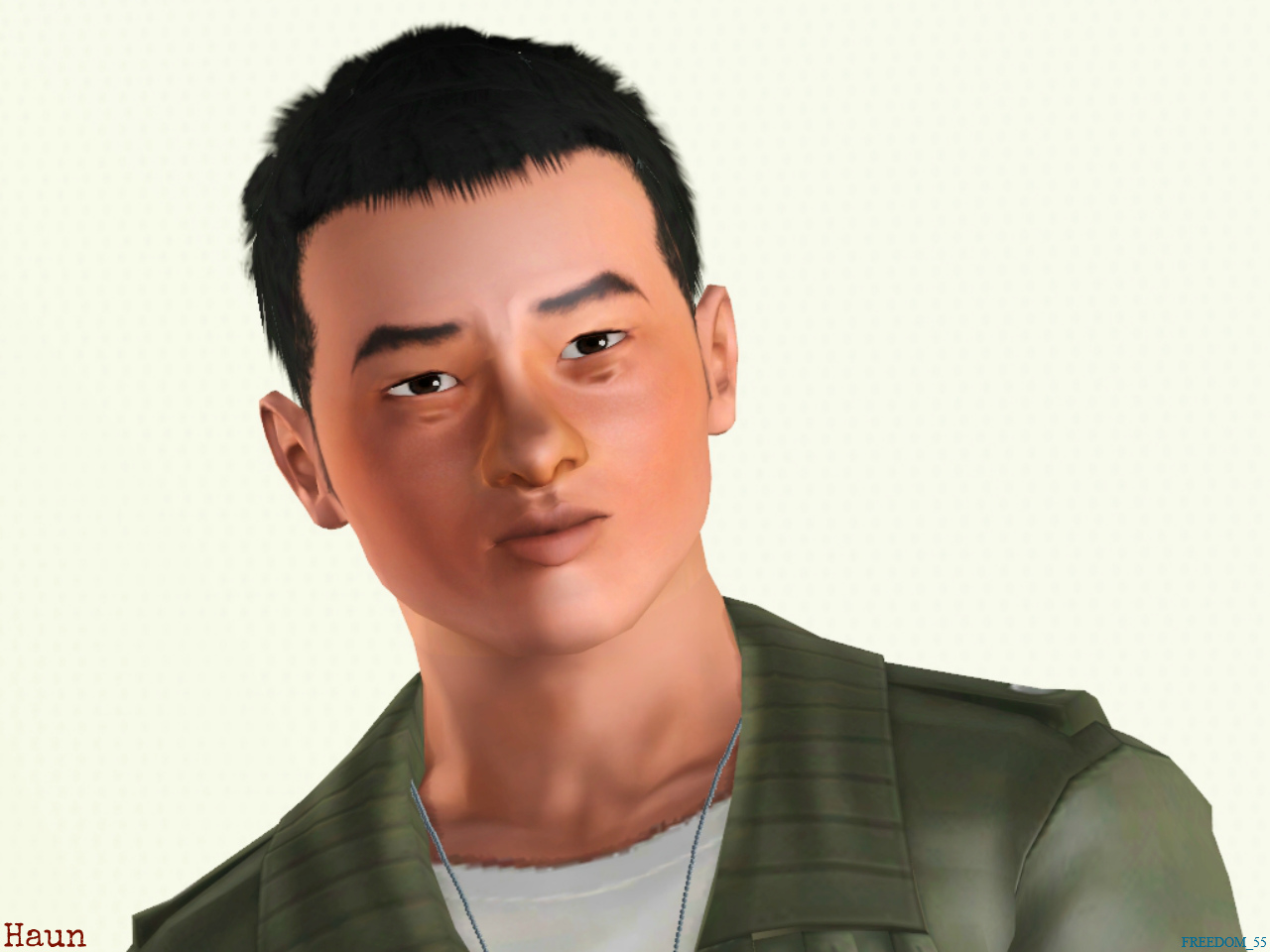 
Haun is one of my sims I'm most proud of

So please take care of my most beloved sim

Additional Credits:
Thanks to the above CC creators! I love your work and he wouldn't be the same without you

Thanks to my friends Ny Girl,Cece,and Kamikinz for their feedback.

An extra special Shout Out to Shyne- Thank -you for all your support during this project and friendship.And let's not forget his lips and pores were the added hint of "Shyneified" realism he needed

Back to download view
17 Comments / Replies (Who?) - 3 Feedback Posts, 13 Thanks Posts
Hide Thanks Posts for this thread (Show only feedback)
Hellfrozeover
Tartan McBadgerface
THANKS POST

Wow! I love realistic Asian sims and you've done an amazing job with him! So many of them are what I call EAsian where someone has just went crazy with the eye rotation slider (like Leighton Sekemoto) but Haun is just perfect! Thank you for sharing him

Oh, thank you!!!! I have made a lot of Asian females for my game, but I am absolutely terrible at sculpting males. Haun is perfect for my game. I love love love your sims, Freedom.
Jasumi
Scholar
THANKS POST

lmao I'm sorry, I just thought that was hilarious...


To Freedom, great job! He is very handsome (and adorable) like the rest of your sims...
Haaailey
Test Subject
THANKS POST
#5

He looks and his bio sounds exactly like my boyfriend, except he only wishes he could drive getaway cars.
monca533
Scholar
THANKS POST

Oh my! What a realistic sim! Congrats!
noxnoxnox
Forum Resident
THANKS POST
#7

This sims is so realistic, I could imagine any real Chinese guys with the same face walking by. Thank you very much. I'm sure I would have a lot of fun with him.
mamxnb
Lab Assistant
THANKS POST
#8

wonderful work on this sim !
daphnegirl123
Field Researcher
THANKS POST

Authenticity and realism was truly my goal, so I'm glad to know I got it right :p

@ Hailey-lol I bet he does! your a lucky girl

Loved Haun as soon as I saw him.
I gave him a new haircut and set him as the corrupt strip club owner in my machinima.

Haun's a star *>*
Thanks for sharing and letting me know

Really love him, thanks a lot.
reinmag
Lab Assistant
THANKS POST
#14

Did I tell you that I had the next episode .. Haun again, of course, and he'll figure in the last one too.
He's a bad boy, but has good streak that makes him feel guilty

You made Haun stay true to character

This episode is even better.
I love this series very spirtual and moving

I really like this Sim! Reminds me of Wei Shen from "Sleeping Dogs", except Haun looks more South East Asian (Lighter skinned Vietnamese) and less Chinese. Still cool none the less :D

Thanks for this sim!
Johnswife
Test Subject
#17

Great job! But it looks like he has bags under his eyes...
FREEDOM_55

feel free to not use the eye bag make-up if you want, it's optional