***Updated 7-12-12 Fixed sims not being able to smoke from the same pack at the same time, and adjusted the chance of getting a smoking habit. 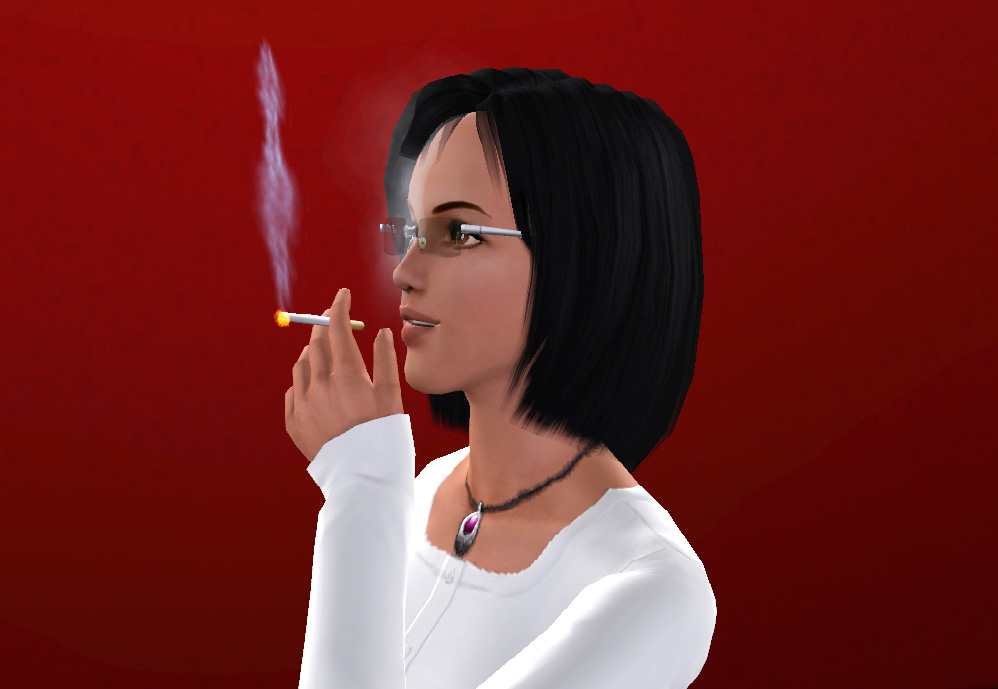 What it does...
This mod gives sims the ability smoke cigarettes to your game.

How it works...
To use, in Buy mode go to Misc Decorations and purchase a pack of cigarettes for 6 simoleons, and place it on a surface(NOT the floor/ground). 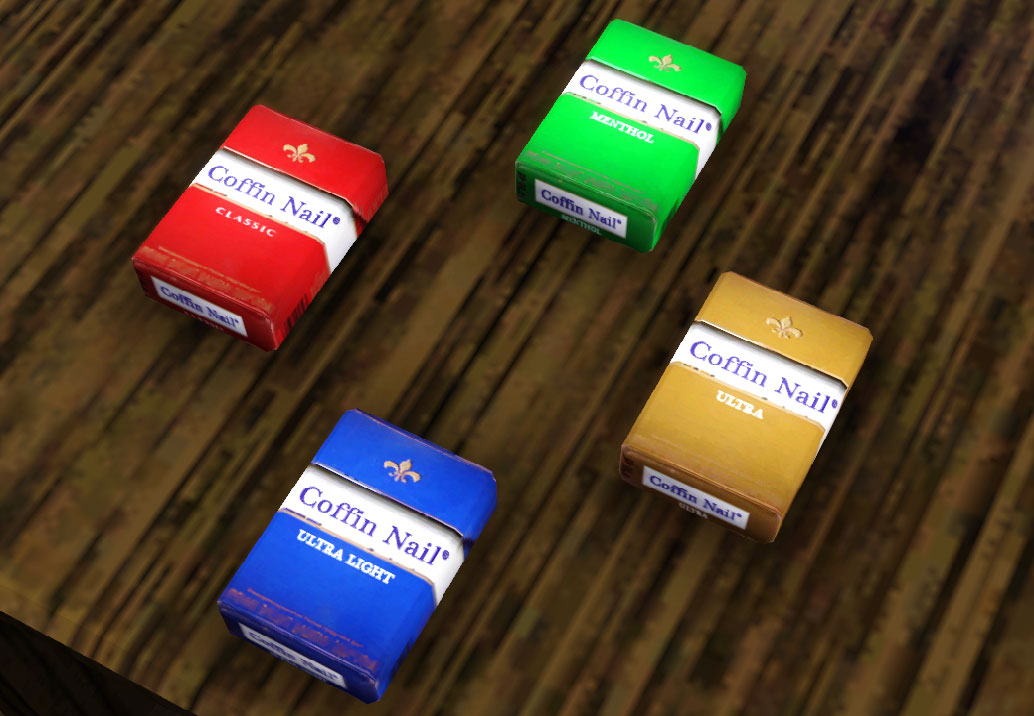 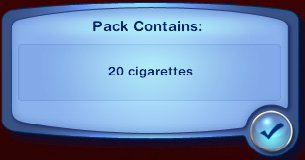 Quitting...
To quit the smoking habit, You must let the SmokedCigarette buff run out. You will then get the NeedCigarette buff, but you can't smoke again. You will have do other things to keep your sims Fun motive up until the quitting process is complete, which takes 15 sim days. After that, you get a QuitColdTurkey buff, and life goes back to normal. Unless...

Relapse...
If you have the QuitColdTurkey buff, and your sim smokes again, you get the SmokingHabit buff again and a FellOffTheWagon buff, and you'll have to start the quitting process all over again.

Machinima/Story Telling
If you have NRAAS Debug Enabler, There is a debug interaction "Smoke" that lets the sim smoke endlessly(until cancelled), without any side-effects

Other Stuff...
-If you don't want your sims addicted to cigarettes, DON'T BUY CIGARETTES.
-Smoking is autonomous, so if you don't want other sims smoking, keep the pack in inventory.
-Sims will only smoke while standing.
-Eco-friendly and pregnant sims will not smoke autonomously.
-Only Young adults - Elders can smoke
-Unicorns vomit rainbows

Known Issues...
Fatter sims will get clipping in the animation. The fatter the sim, the more clipping there is.

Conflicts...
This mod should not conflict any other mod, and it does not modify the game in any way. It's just an object.

Translations...
If you would like to submit a translation, download the xml here: http://www.modyourpanties.com/hosti...ettemodSTBL.rar. Translate the parts between the <STR></STR> tags and PM me with a link to the translation. I will release a version with the translations when I have enough.
Translations already received:

Built with Game Version: 1.26
Key: - File was updated after upload was posted
Need help with downloading or installing content? Click this link!
Don't forget to Thank the creator after downloading! Use the Thanks button located above the screenshots above.
Basic Download and Install Instructions:

See: Game Help:TS3 CC Basicswiki for a full guide!
Back to download view
1512 Comments / Replies (Who?) - 692 Feedback Posts, 761 Thanks Posts
Hide Thanks Posts for this thread (Show only feedback)
Page 1 of 61
ButchSims
And all the maladies of the world burst forth from Pandora's cooch
THANKS POST

I've a sim that's supossed to smoke like a chimmey and this will be perfect for him!
mrbandicoot16
Test Subject
THANKS POST

1 could you make it work for teens? It'd be funny to have that one rebellious teen smoking and the parents getting mad or something. And 2, if you've created the animations could you make a pack like a bag or something and have them smoke weed and have different moodlets to go along with that?

Sorry, I should just be grateful that someone finally came out with this! LOL. I know it took a while for cigarette mods to come out for ts2, and even longer for weed. Thanks so much for your awesome creation, now atleast my adult sims can actually smoke instead of looking awkward with a cig accessory. :P
Jemholder
Test Subject
THANKS POST
#6

Thanks so much for this! I agree with Doby, this would be cool for rebellious teens too.

I personally would never touch the things but that doesn't mean my sims can't. You did a great job and this will definitely be a well used function in my game. Thank you for creating and sharing

i have to chime in and say, you are fricking awesome!! your creativity knows no bounds. thanks so much!
coffeecore
Test Subject
THANKS POST
#11

This is so awesome! Thank you!!!
ddsmile5
Test Subject
THANKS POST
#12

OMG you rock. I need this. Though i don't smoke myself. I just made a Sim that chain smokes. Thank you.

I don't smoke, and never have... But this is the coolest thing I've seen all week!

Really well done this looks so amazing. Can't wait to try it out.
**I_am_ME**
Field Researcher
THANKS POST

this is so awesome, i have a hard time believing it's real! lol

i hope it's compatible with future patches too. i will keep checking on this for updates

also... umm sorry for this annoying question, i don't really keep track of patches (i know i should

WTF?! I never thought of this in my game! Can u make an endless pack for characters I dont play. So sims I dont play can stand around and smoke. Better than them reading all day.
AJSimon
Instructor
THANKS POST
#17

This will add some realism the to the game. Thanks!
Fluxit_Aqua
Test Subject
THANKS POST
#18

BRILLIANCE! Thanks so much! =3
ukbucket
Test Subject
THANKS POST

My jaw dropped when I saw this! I loved the cigarettes vending machines mod in Sims 2 and will abuse this one too! The use of moodlets is cool, as well as the clever autonomy

Thank you, this is awesome!
Hope someone will make a weed version

this is just great!!! thank you so much!<3
vivian13
Test Subject
THANKS POST

OMG, this is such an unique mod.
Can we recolor the packs? I would love to have the brand I smoke, but I don't want to mess the mod if it's not possible.
But anyway, thank you for sharing!
crazychick112
Test Subject
THANKS POST
#23

this is really awesome thanks soooooo much!
Morphead
Forum Resident
THANKS POST

This is an awesome buff. Much realism. Now I can ostracize my smoking Sims! And nag them to death to quit.
dedreav0531
Field Researcher
#25

That would be hilarious; even though, in real life, I can't stand when people smoke around me. Makes me cough, sneeze and get a headache.