Chloe Price from "Life is Strange" 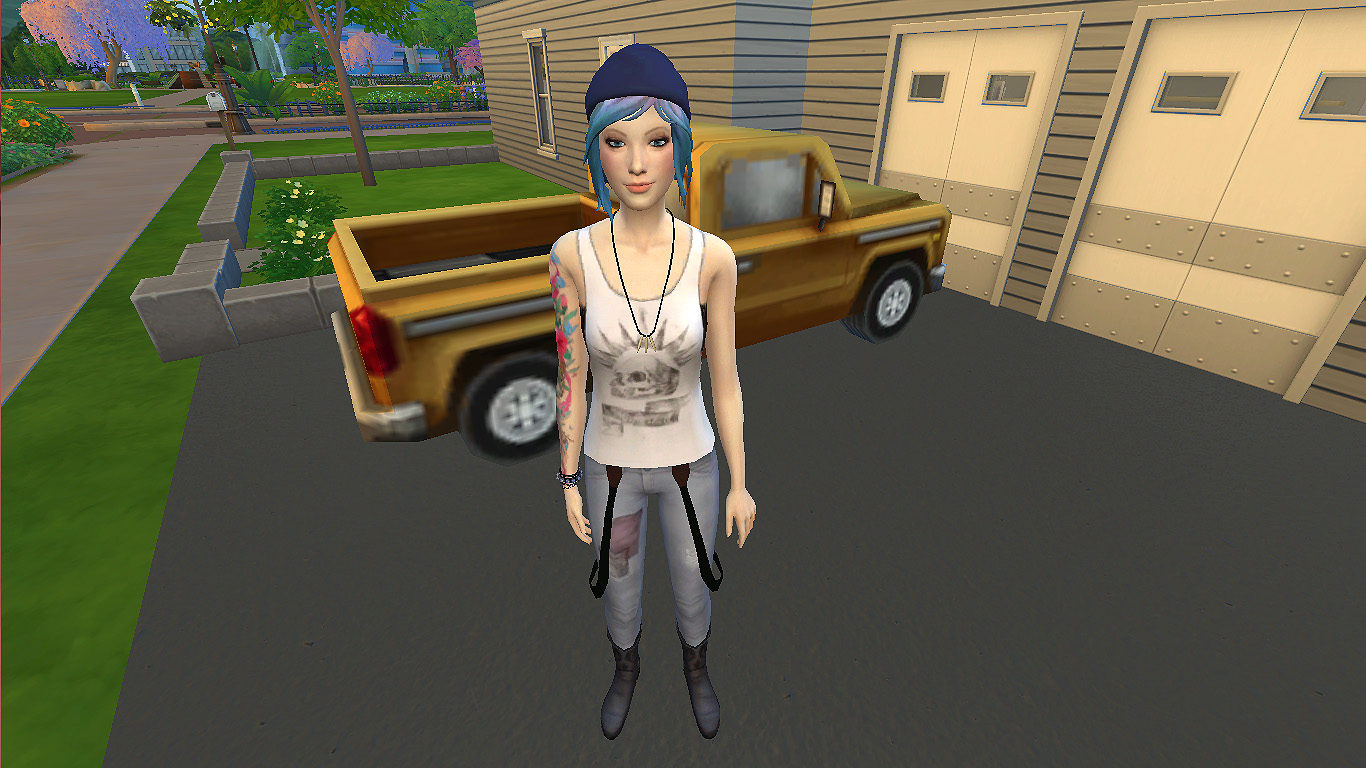 Chloe Elizabeth Price (born March 11, 1994) is the deuteragonist in Life is Strange. She was Max's best friend before she moved to Seattle, leaving Chloe in their hometown of Arcadia Bay, Oregon. They rekindle their friendship during the events of the game. After Max left, Chloe became best friends with Rachel Amber before she went missing. She is the daughter of William and Joyce Price, and the step-daughter of David Madsen.

She becomes the playable protagonist in Before the Storm, the prequel to the events of Life is Strange. 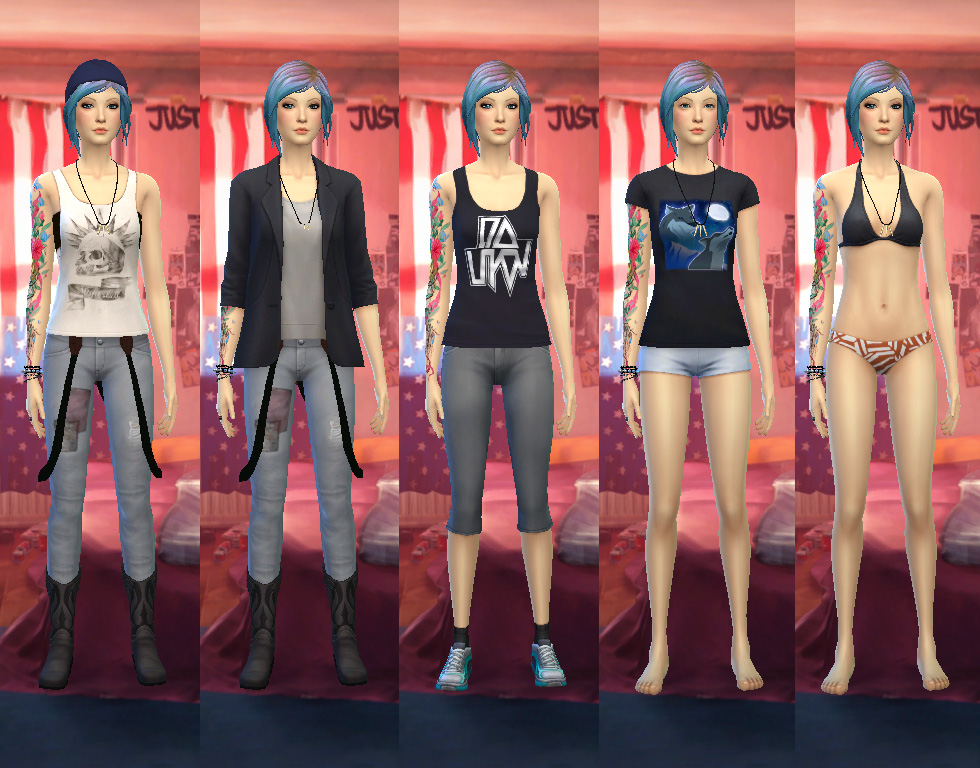 ps: Both my Chloe and Max appear on the screenshots using joannebernice's default replacement eyes which can be found HERE

Back to download view
22 Comments / Replies (Who?) - 8 Feedback Posts, 12 Thanks Posts
Hide Thanks Posts for this thread (Show only feedback)
Tysakasa
Lab Assistant

So I downloaded all of the additional parts (some which are duplicates from the Max one, so skipped the ones that I already had), however Chloe's party outfit seems to be missing her shirt and with no reference, I'm not sure what to be looking for.

Other than that, well done. Both Max and Chloe (have yet to check Warren since I'd rather make sure everything checks out one at a time) look spot on, with the only real difference coming in the form of style between Life is Strange is Sims 4, which is pretty impressive when compared to a few glimpses I've seen of others. Though I do notice some kind of oddity around Chloe's eyes, not sure what mod it is yet, but seems that at certain distances some kind of translucent mask begins to form around the eye area from side to side. It's rather faint and may not be noticeable while in play, mostly just checking things out while things are paused.
luizgofman

Hi, thank you sooooo much for the feedback! I loved it. So, let's go. YES, I saw the weird thing on Chloe's face right next to her eyes! I found it really weird since Max uses the SAME make up and doesn't have it. But to me it appears only in CAS and in game it disappears annnd tbh I thought that it could be a problem with my notebook hardware or something like that! But tell me, did you notice that in game, even if just a bit? Because then I have to find a way to make that disappear for once.

About Chloe's party top... hmm well maybe I made a mistake. You see, I have two versions of Chloe's tank top. And the party top was supposed to be the same as the casual one. It's the same for the entire outfit, actually (Both Chloe and Max go to the end of the world party in their casual clothes so I wanted to play with that). I think I might have put the other Chloe tank top in the party outfit and didn't notice. But meanwhile just put the same as the casual one and you'll be good to go. (I really think that the one I chose is the best one).

Sorry for my heinous english!

Quote:
lol, Your english is fine, unless you edited before I checked in o.O

Anyways, I never actually tried in CAS since I prefer to see stuff live (lighting and such can make a difference), but yeah it would appear in live at a certain distance. I'm on a laptop as well, but it runs the game fine at higher settings. The only thing I can think of that could be the cause system wise is possibly the lighting//shadow setting (mine is set to low because it murders frames when set above that XD the GPU in my system is a little lacking due to HP's choices on power saving when they designed this one). However if it's not related to game settings, then the only thing I can think of is possibly the hair or the hair colour, but I'm not expert on modeling and the custom content that comes with it, so it's just speculations. However since I don't really get up close and personal with my sims all that often (generally when observing new animations I'll get up close, but other than that I'm either hovering at a level to see most of my lot or something akin to a third person game which I don't notice the oddity) it's not something that may be that much of a bother. But good to know it isn't just me seeing it.

As for the top, fair enough, it's kind of the downside to having multiple objects with similar designs, you sometimes don't realize which one you used XD I'll just have to dig out the shirt when ever I go to use her (given all of the new stuff I got from your uploads, I need to maybe try and sort them, or just leave them in the folder I dubbed Sim Parts since my Russian is very lacking and I'm not sure what some of the Cyrillic named packages are suppose to be XD ) or make a second copy of her with the update. All comes down to whether I'm lazy about it.
Frechi
Lab Assistant
THANKS POST
#5

Dude... I love you already! You've just combined some favorite games of mine!! :D
cor69p
Test Subject
THANKS POST
#6

Thank you very much! Haha, I don't speak russian too but I accidentally stumbled on that site that had a lot of LIS cc together. Well, I'll look at it and I'll update Chloe in the future. Thanks to you!

I was really impressed with how good max came out, and you did it again! I saw warren too. they all came out amazing!
NoOmie
Test Subject
THANKS POST
#9

My hubby who doesn't even play the sims knew straight away who this was, we're both floored by the likeness! Well done!
Meredith99
Test Subject
THANKS POST

thank you so much, your sims look really nice! ^^
MeadowSkye
Test Subject
THANKS POST
#12

I knew who this was as soon as I saw it in search! Just a couple more weeks until the Life is Strange Prequel!! Thank you!
shibamistress
Test Subject
THANKS POST
#13


I do not even work a character of life is strange, no file of the sim has the famous .package
Eltoroze101
Test Subject
DELETED POST
3rd Mar 2018 at 6:05 PM

This message has been deleted by Eltoroze101.
velociraccoon
Test Subject
THANKS POST
#15

Exactly what I was looking for, this is perfect. Thanks!
BegiCZ
Test Subject
THANKS POST
#16

Hello
i have problem with instalations. I copy all filles from archives it "documents/eletronic arts/the sims 4/tray" Characters is not visible in games library.
Mods in games are allowed.

Cannot download "Suspenders by Princess Paranoia" anymore. It's shows "The URL you requested could not be found."
Can you provide the files?
coffeehedake

Don't want to direct link but if you follow the original link, then click "MY S4CC " in the sidebar click the link for Old CC labeled "CAS". It sends you over to an old forum post where the archived packages can be found I believe.
Building Worlds, one polygon at a time, since 1993.
Achelexus
Test Subject
THANKS POST
#21

Quote:
It's been nearly a year but I'm like 99% sure this is the same content by the same creator , since the URL is a match just on wordpress instead of tumblr. I think the creator had both blogs and then their tumblr was taken over at some point by a spambot that wants to sell you tools to find out if your partner is cheating.

ETA: The about page of the Wordpress appears to confirm my suspicions.