by tklarenbeek Posted 9th Apr 2020 at 5:39 PM - Updated 7th Apr 2020 at 9:28 PM by tklarenbeek
12 Comments / replies (Who?) - 6 Feedback Posts, 6 Thanks Posts
This is a new mesh, and means that it's a brand new self contained object that usually does not require a specific Expansion pack (although this is possible depending on the type). It may have Recolours hosted on MTS - check below the description for more information.
I've never really been a fan of how human-like aliens look in the Sims, so I made a head morph that looks like an alien taken straight out of Roswell. This mod does NOT remove your sim's ears or include an alien skin and eyes like in most of my screenshots. Without additional content, this is what your Sims will end up looking like: If you want your Sims to look identical to my main screenshots, I used the following content:
S-Club's ET Skintone
CmarNYC's No Ears Mod
Remussims's Gamete Eyes

MOD INFORMATION
There are two different versions of the head included, both found under the eye presets menu. Note that only the first has a proper alien icon, but the second should appear directly after it. 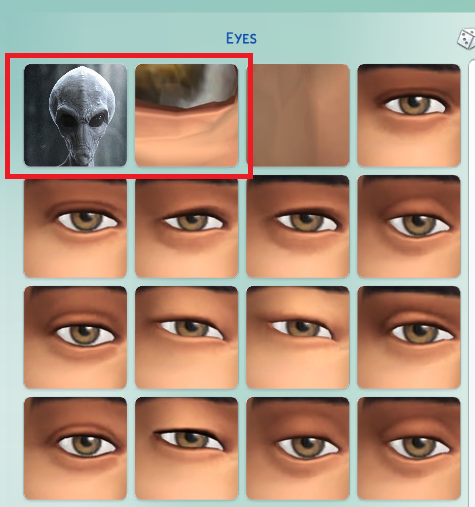 The first version is the head with a size comparable to a normal Sim's head. The second is the same shape but slightly enlarged to appear more similar to descriptions given by alien abductees in real life. These presets are available for all ages, genders and occults (Human, Alien, Vampire, Witch, and Mermaid).

Compatibility
I believe this should be compatible with just the Base game, but I have not tested this.

Known Issues
Since the head has been altered to the extreme, there are some clipping issues. First, the eyes will clip very slightly out of the sockets when your Sim is not looking straight forward. It's pretty subtle so you probably won't notice it that much. Second, sometimes teeth will clip through the cheeks. You can fix this by just adjusting the mouth position. Third, since the top of the head has been enlarged, it will probably not work well with most hair.

Need more information?
Back to download view
12 Comments / Replies (Who?) - 5 Feedback Posts, 6 Thanks Posts
Hide Thanks Posts for this thread (Show only feedback)
Simorph
Instructor
THANKS POST
#2

Can any Sim use this? Or must the player select "Alien" in CAS when creating the Sim? I would like to think this is Alien unique so magic users, vampires, mermaids and no-occult Sims could not use it. Aliens don't seem to get much special things to make them worth playing for me. Then again, maybe they do have special ways and I just haven't played one long enough to figure that out?
tklarenbeek
Test Subject

Quote:
Any Sim can use it, no matter the age or occult. I've always felt more options is better, since some people might want to make something like vampiric aliens for example. You don't have to worry about non-aliens using this morph though if you don't want that, it's set to not appear on randomly generated Sims. The only way you can have a Sim with this morph is if you manually put it on them in CAS.
Godzilla-Force
Field Researcher
#4

This is really cool, though I'm curious if there is a "Eyes Only" version in the works, as I like to create my Grey aliens with a bit more of a human face and head, it's just I cant get the eyes large enough.
Check out my Patreon, I feature Artwork and Short Stories and Bio's about my own Personal Multiverse, as well as some CC I'll share for early release (nothing major right now though, Mainly just recategorized Maxis Content).

Thanks for this. There's so many un-realistic alien heads out there, consumers need the real deal.
Just out of curiosity, what exactly did you base this on?
Did you get laser scans of actual space aliens?
If so, can I get their contact info? I have some more modeling work for them.
sims699
Test Subject
THANKS POST

OK. Thanks for responding so quickly!
helene912
Lab Assistant
THANKS POST

WOOOW! I mean, REALLY! Wonderful work, thanks 4 sharing!!! I used to try that myself and failed … :D
Simdrew1993
Field Researcher
THANKS POST

I don't normally sign in on here much anymore, but had to. To stop by to say wow! You truly outdid yourself, this is some of the best talent I've ever seen. I've always felt the same way and wished we could have aliens based on the (Greys) extraterrestrials. Thank you so much! Truly! Now I can create the alien Elvis from Perfect Dark, haha you rock! This mod deserves an awarded or something.. seriously! I'm so excited for this! And I hardly ever get this happy! Thanks again!

Ah, I seem to have an issue.. I'm using 7zip and it says failed to extract as archive... and I can't open the file either.

EDIT: Ah nevermind! Got it working, had to download a new version of 7zip then worked like a charm, thank you so much!

I make Zelda Sims, so please feel free to check them out!!! :D
RequiemBlanchett
Test Subject
THANKS POST

i love this soooo much!!!
ArmyDreamers