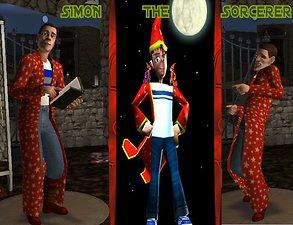 Here is SIMON THE SORCERER a video game charactor with a short lived existance. If you dont know him he is a rookie wizard who is trying to save the universe from Sordid ( the evil wizard ). Simon doesnt like his quest and personally wouldnt give a care if the universe was destroyed but he is forced against his will by ( the eldest wizard ) Calypso. He finds that the only way the old man will help him get home is if he takes down Sordid and Simon being a lazy selfish person doesnt like this but he cannot risk the chance of not returning home so he sets out on his adventure.

ABOUT THE WIZARD HAT SHOWN ABOVE ( 1.jpg )
That is a picture that I photoedited to make it seem as though simon was wearing his hat. It took me a while to get all the details correct Please dont be in a hurry to claim that is false advertisement the picture above is mearly a representation of what my SIMON THE SORCERER PONYTAIL WIZARD HAT MESH will look like if I can find a user willing to help me import it into the game as a hair. I am hoping a hair modder will stumble upon this or at least someone whos friends with one.

IF YOU CHOOSE TO DO THIS HAIR IT MUST BE FOR HOPEFULLY ALL AGES, LISTED UNDER BRUNETTE HAIR ( genetic wise ), AND BE FOR MALES ( females optional ). Further information is given inside the thread.
THE PACKAGE YOU WILL BE LOOKING FOR IS ( wizardponytailhat.zip )

Interesting fact about simon the sorcerer series:
Almost every rock and tree you come across in the games have a face.