by Quinctia Posted 27th Aug 2009 at 5:15 AM - Updated 21st Dec 2009 at 1:26 AM by Quinctia
14 Comments / replies (Who?) - 13 Feedback Posts, 1 Thanks Posts
This is a new mesh recolour, and means that you will need to download the particular mesh itself in order for this to show up in your game. See the Meshes Needed section or read the text for more information. 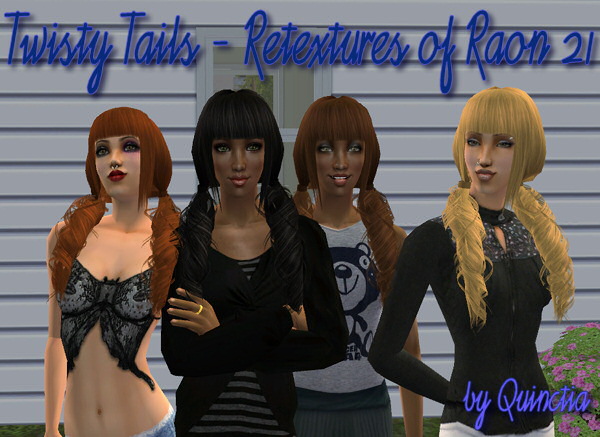 Here is another old hair that I painted a texture to. This mesh is Raon 21, which you will need to download in order for these to work.

I've actually had these done for a few months. The hold-up was that I intended to do a whole set worth of the dipped/streaked colors, but never got back into the project. The regular naturals are all done, though, and I tossed in the blonde/purple one. I'd rather share now and add some additional colors later than never share it because I didn't "finish" the project. 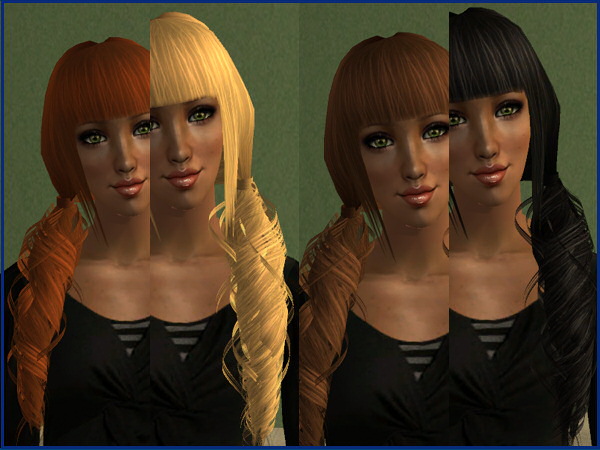 The main family is the black and darker recolors, binned, with a dark gray attached to the blonde. 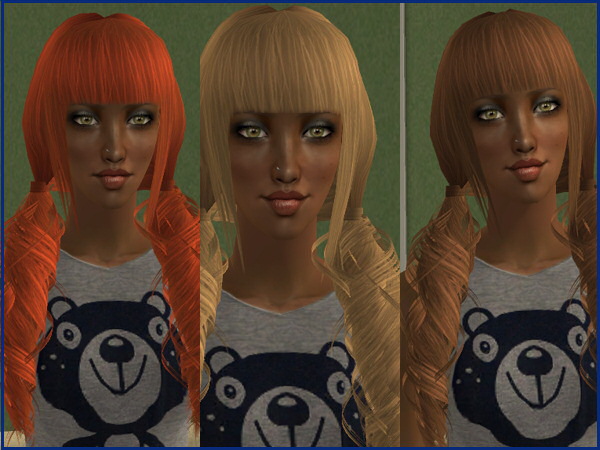 The lighter recolors are familied together, with a silver gray attached to the blonde. 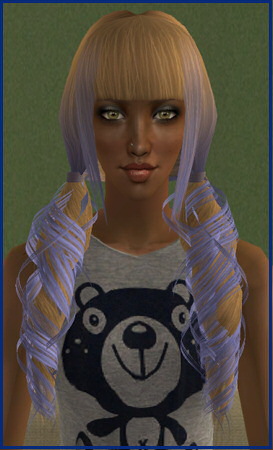 Our lone streaked/dipped color is blonde/purple, available for ages Toddler - Adult, and it is binned as blonde.

Back to download view
14 Comments / Replies (Who?) - 12 Feedback Posts, 1 Thanks Posts
Hide Thanks Posts for this thread (Show only feedback)
StaleMuffin

Thease are so nice, may i use your textures? If i can could you send me a few samples i could use so i dont have to download thease and then take them myself? Ill give you a link back and credit.
Simming-GlimmerStyle.com

The hair is awesome!
Also where did you get that black butterfly top form the picture?
swampcandy

thx bb!!
I basically just like to play uglacies.
cessyka5

The hair looks more natural with your retexture.
I also really like your models. Can I ask you where did you get the skintone?
Thanks anyway!
Quinctia

I'm going to assume the skintone you're inquiring about is the darker one, on the twins, and they're wearing Enayla's Pixie Chocolate. The other two girls are wearing the skins I use as my defaults from Lyran.net, which are Maxis-based, with a few handpainted improvements.

I went and looked at the crop top, and it came from a site called sim-placement, which no longer exists and is not in the graveyard. It is one of those items that I had in my game for literally years and years.

I know I don't have anything pay in my clothing, so I just threw the hair on some of my born-in-game sims...I would've changed Clover into something else if I had realized that the site the shirt came from was long dead.
WarriorKalia
Test Subject
#7

Is there any way you can share the top though? Seriously, it's awesome.
Meag_Lane

where did u get those clothes?

mesh link was blocked by my anti virus wish they can upload the mesh elsewhere preferably in a safer websit.
Quinctia

Here is an alternate download link on my Mediafire account which should include the mesh. I believe Raon's site is no longer around.
Stories (okay, LEGACIES), Tutorials, and Downloads at my sim journal:
http://rikkulidea.livejournal.com