By an almost request, I bring you Walking Ghosts. Ever been tired of ghost moving .0006 miles per hour? Annoyed with how they float? What about their want to always scare people? Then this mod is the choice for you. It will cause your ghosts to walk like normal sims and it also removes their want to "Be Ghostly" (possible side affect is they won't haunt objects). This is a very simple coding mod, and should not conflict with anything. If you have problems with it not working resort to the MTS installation guide. Please Enjoy! 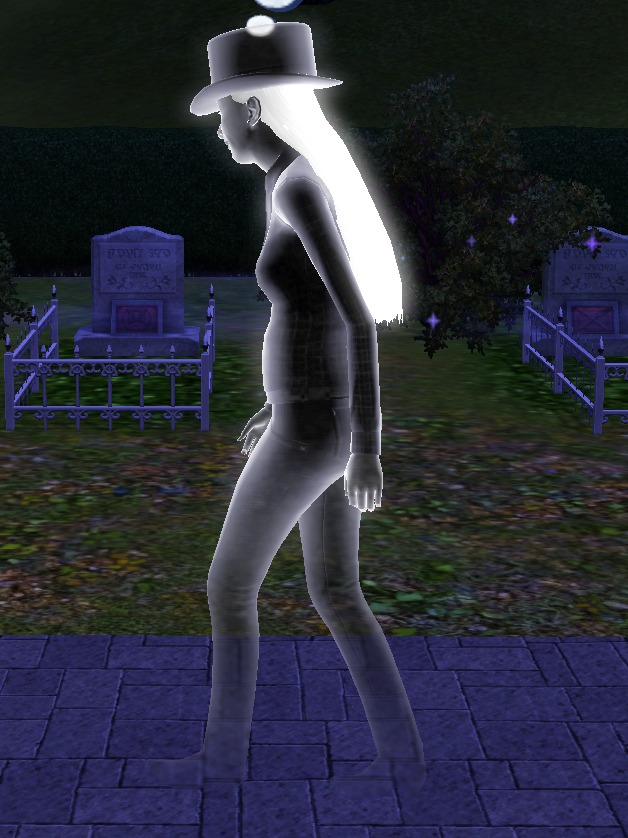 Built with Game Version: 1.10
Key: - File was updated after upload was posted
Need help with downloading or installing content? Click this link!
Don't forget to Thank the creator after downloading! Use the Thanks button located above the screenshots above.
Basic Download and Install Instructions:

See: Game Help:TS3 CC Basicswiki for a full guide!
Back to download view
19 Comments / Replies (Who?) - 15 Feedback Posts, 3 Thanks Posts
Hide Thanks Posts for this thread (Show only feedback)
DaveyDaVinci

thank you soo much! I know floating ghosts are more realistic but it's also more annoying.....wish they wouldve kept the walking ghosts lol
Enjoji

Yay, no more floating ghosts! Can't wait to download and give this a try

I didn't see this in the description, but I might be wrong, but does this only affect resurrected ghosts, or does it affect all ghosts. Because I still want my dead ghosts to be, well, ghostly.
OMAR'S BAMFERIFIC!
Be THERE or be SQUARE.
anie_1981

Can anybody tell me, If there Is the mode, witch allows to resurect ghost? I would like to get an occasion to resurect dead person, but the game never gives me that. Even when I have graves in Iventory or on my lot. I used awesomemod, to resurect, but this mod Is breaking the game.
whoden

Treeag's Simtransformer allows you to change any existing sim into a playable ghost of any sort(fire, electrocution, drowning, etc.), as well as a mummy. It will also resurrect them.
Human beings are a very irrational species. Some of them are even afraid of pickles.
Zheed
Test Subject
#8

Mine is already walking.. it isn't haunting objects or scaring ppl.. all it does is walking thru stuff and sounding like a ghost.

I don't got (or need) this mod... The ghost started to walk by it self after I made a copy of the household and moved in to an another loot with it. All other ghosts seams to be hovering like normal...

@anie_1981
you can resurrect ghosts... I haven't tried it.. but you needed to eat something... think it was ambrosia or something.
thunderhorn1997
Test Subject
#9

this goes in mods right ...
goyahaslegs

Have been using this mod for a little while now and I just want to say thanks. No more irritatingly slow ghosts without losing the 'spookiness' quality. Well done.
nandypanda

LOVE! It is super useful since I have that monster creator thingy.
Powdered doughnuts make me go nuts!
isilra

Does this conflict with the latest patch ambitions?

My ghosts were walking before I got that patch and now they are floating slow. So this is really needed! Thanks.

It´s all in your head.
Croquignol

I have the most recent patch for ambitions and the mod works for me. The ghosts are walking. I don't know if they stop haunting or scaring because I never saw them do this before anyway. Your probem must be caused by something else.
EarthGoddess54

He who knows that enough is enough will always have enough. - Lao Tsu
Croquignol

Too bad it is no longer updated, it doesn't work anymore with the latest patch.
I hope someone will fix it soon, I have several houses full of ghosts, and now they float miserably and are no longer funny.
Cricket077
Test Subject
THANKS POST
#16

I always thought it was so annoying and creepy when they floated. I have an entire family of ghosts, and it was annoying how the toddlers moved.. now if only someone could make a mod to remove the moaning noises

thanks for making this :D
Silver Babywolf
Test Subject
THANKS POST
#17

can you please update it, it would be great for pets because floating horses look retarded

Really hope someone updates it because my ghosts take forever to get anywhere.
dudejuztchillin
Lab Assistant
#19

some sims cant interact with ghost. so far the 1 problem I find using this again. other than that? the mod still funtions. The ghost can interact with other ghost "even active ghost" they can interect with live sims, but you cannot select a ghost "active, or non-active" to interact with, with a live sim. this makes no sense, and sounds more like an EA break to stop the use of it. I run many mods on my offline game "modded too death" (never been online "connected to ea"). they work fine, but when I try use them on my game I connected with EA online? they crash the game. Same exact game patch. both have all expansions, and stuff packs. I manually patched both games with the super patch for all regions to be sure they were the same. this makes no sense. going to go try this on my offline game again. see if interections are blocked for live sims with ghost, like the online version I use to upload/download.
dudejuztchillin
Lab Assistant
#20

Ok, This mod still works PERFECTLY on my game I never allowed online. I started a new game on both of them. Same town, same sim. No ghost spawned on the game I have connected online to EA the first night. (no big surprise) lol

So I do not know if a fresh game will allow the interactions on it, or not yet. But as far as my modded to death game I never log online with? Same patch current base game. (I used the region free super patch on both. They are identical, just 1 never connects to EA with it) Base Patch 1.67.2.024017? This mod still works great on it!

UPDATE! It works on the online connected one as well!. All I had to do was check the mod for incompatability on both, and clear the caches afterwards. This can be done with " Delphy Dashboard", which I believe you can still get here on MTS. I then started a new game on both of my Sims 3 installs 1 offline, 1 online. They both allowed me to interact freely with ghost, the ghost interacted with each other, sat, read books, etc. I was able to get romantic with a ghost on both installs with no cheats, and pick up their tombstones after they returned to grave. For the old school players? This was how graveyards, and ghost "used to be". The floating, non-stop "eeewing" of each other, and hovering blandly with no purpose apparently, and moving slowww-asss-snailssss was an EA improvement on the game?

Anyways, I give this mod a BIG thumbs up. I still works on my online clean game I use to share uploads, and get downloads, and my modded too death offline game, repaired, and enhanced with many mods, and EA fingers kept out of I play to actually have fun? Base Patch 1.67.2.024017 the 1.69 patch I have no idea? I have heard nothing good about it, and it simply causes incompatibility downloading from the exchange at times. I understand this patch was added to all newer downloaded games? Got no idea. I am a "hard disc" guy. I like to actually be ale to touch/see what I bought.

lol. If you find this doesn't work for you after doing what I did? I suggest getting the region free super patch they posted at the games official "end-of-life stage? (Still available at the Sims 3 web site) It is "supposed to" work on any Sims 3 install. As far as animals go? I find them mostly boring alive. So I didn't try any dead ones out!

Someone else can try that out, or maybe I will later? Perhaps the issues claimed with this mod are strictly "pet related"? All I can say is don't believe everything you read. Try it out yourself before burying it under a blanket of warnings.