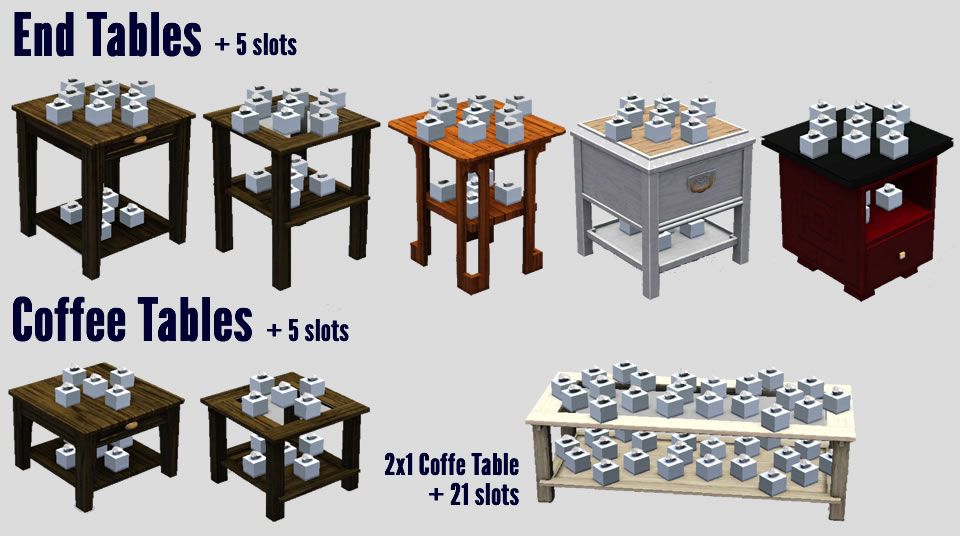 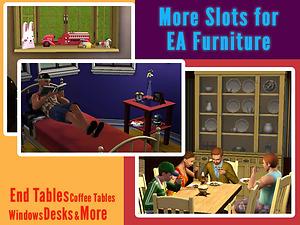 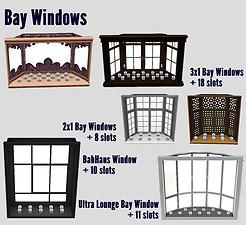 1,780 Thanks  Thanks     381 Favourited
Picked Upload! This is a picked upload! It showcases some of the best talent and creativity available on MTS and in the community.
More Slots 4 EA Furniture

Based on Lord Darcy's More Decorative Slots for Maxis Furniture and cmomoney's bay windows with slots (Not Just Another Bay Window and Gone with the Window), I bring you More Slots for EA Furniture!

Wasted space bugs you? Not anymore, let there be clutter!

This mod will add (more) slots to end tables, coffee tables, bay windows, desks, and other objects such as the china cabinet and the drawer from Ambitions. The latter now works as an end table and can hold functional items such as the Music Box, Fishbowl, etc.

Added 5 slots to 4 end tables which have some space to put things on under the table.

Added slots to 3 coffee tables which have some space to put things on under the table.

Desks
Added one slot to one desk which have some space to put things on and fixed another desk's slots.

Windows
Added slots to 4 bay windows which have some space to put things on.

WinDoughDesert ShieldFantasie Bay WindowChesapeake Bay Bay WindowThe Insulator Bay WindowConcrete Boarder Window
Note: Don't forget to download cmomoney's Not Just Another Bay Window with 18 slots and Gone with the Window with 15 slots so you have slots in all windows!

Other
Added slots to several items which have some space to put things on under the table.

Notes:
This mod edits the VPXY and RSLT resources of the objects mentioned above, and will conflict with other mods if they do the same. As it does not modify the _RIG resource, it is compatible with the 1.26 patch version.

It also modifies the OBJD, OBJK and FTPT of the Thor's Drawer for it to work as an end table; if you have a mod that modifies these resources, it'll conflict.

Note that these are not clones of the game objects but modified "default replacements" that add slots to them.

See: Game Help:TS3 CC Basicswiki for a full guide!
Back to download view
50 Comments / Replies (Who?)