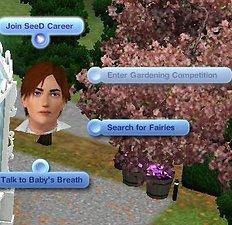 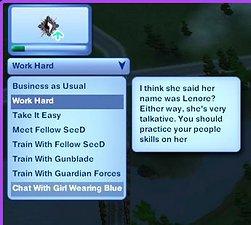 89 Thanks  Thanks     35 Favourited
This download is a custom career. This means that you will need the NRaas Careers mod installed in order to use the download in your game.
Ever looked at your Final Fantasy VIII sim and though "Man, I wish I had a SeeD career for these guys."?

Probably not, given the fact that there haven't been any TS3 Final Fantasy VIII sims released on MTS. But just in case you wanted a SeeD career anyway, here you go!

Please note, if you do not already know this you will need to download and install NRaas Careers mod found here.

Level 1: Class 1
Description: You've nailed the written exam, passed the field exam with flying colours, and the Headmaster of the Garden accepted you with open arms! This is only the first step though: work hard and you might be able to attain the coveted A Rank!
Base Pay: $5 per hour (pay is 1% of the pay in the video game for all levels excluding Level 10)
Pension Pay: $10 per hour
Hours: 5 am to 3 pm, Monday to Friday

Level 2: Class 3
Description: After your first assignment in the small nation of Timber, you took an online written test to upgrade your rank. Menial tasks like this will make up the backbone of your work from now on, although your next assignment sounds pretty fun!
Base Pay: $15 per hour
Pension Pay: $25 per hour
Hours: 6 am to 4 pm, Monday to Friday

Level 3: Class 5
Description: Well, turns out that last mission to assassinate the Galbadian ambassador wasn't such a great idea. Better hurry up and stop those missiles being launched at the Gardens!
Base Pay: $30 per hour
Pension Pay: $40 per hour
Hours: 7 am to 5 pm, Monday to Friday

Level 4: Class 10
Description: You were too late to stop the missiles, but apparently the Gardens can turn into floating cities, so no problem! Time to strike back at the Galbadians!
Base Pay: $80 per hour
Pension Pay: $90 per hour
Hours: 8 am to 6 pm, Monday to Friday

Level 5: Class 15
Description: The Galbadian Garden is within sight. Taken over by that crazy guy who failed to pass any exam for 4 years in a row, you have to give a speech to your fellow SeeD and the other students in the Garden. Choose your words carefully.
Base Pay: $125 per hour
Pension Pay: $135 per hour
Hours: 9 am to 6 pm, Monday to Friday

Level 6: Class 20
Description: You've finally defeated the Galbadian ambassador, but it turns out she was actually possessed by a Sorceress from the future. Sounds like a badly made up excuse to you, but you haven't got time to worry about that - that girl who's been following you around since your first assignment in Timber has fallen into a coma! Maybe someone in the nation of Esthar can help?
Base Pay: $150 per hour
Pension Pay: $160 per hour
Hours: 10 am to 6 pm, Monday to Friday

Level 7: Class 25
Description: Okay, so maybe taking that comatose girl to Esthar wasn't the best idea in the world. Now the evil Sorceress who used to rule Esthar has been released, and there's hundreds of monsters running around. You need to figure a way out of this mess, and fast!
Base Pay: $175 per hour
Pension Pay: $185 per hour
Hours: 11 am to 6 pm, Monday, Wednesday, Friday, Saturday

Level 8: Class 30
Description: The freakishly masculine Sorceress has been taken care of, but no time to rest - that future Sorceress who was possessing the ambassador of Galbadia has some very auspicious plans that involve world domination, so it's time to travel to the future and take her down!
Base Pay: $200 per hour
Pension Pay: $220 per hour
Hours: 12 pm to 6 pm, Monday to Thursday

Level 9: Class A Elite SeeD
Description: Just before you traveled to the future, the Headmaster awarded you and your group the coveted A Rank, the highest - and most well paid - SeeD rank. Just a short time ago, you would've been over the moon at this development; but what good is a nice job with good pay when humanity is enslaved by an evil Sorceress?
Base Pay: $300 per hour
Pension Pay: $330 per hour
Hours: 1 pm to 6 pm, Monday to Wednesday

Level 10: Commander
Description: You've done it. You've saved the world from the evil future Sorceress and made it home safely. There was a big party at the Garden to celebrate, and you had a great time. Halfway through, the Headmaster announced that he had decided to implement a new rank of SeeD, the rank of Commander, the leader of all SeeD. He has chosen you to lead the Garden to the future, to protect the world from evil Sorceresses and ensure no child will have to live without their parents. Congratulations, Commander.
Base Pay: $500 per hour
Pension Pay: $600 per hour
Hours: 2 pm to 5 pm, Tuesday and Thursday

Includes custom tones that, just like the level descriptions, are most definitely not blatant references to the game, nope no way (I'm lying):

Train With Gunblade - Hone your skills with the most notoriously complicated weapon in the world
Train With Guardian Forces - Bond with your Guardian Forces
Chat With Girl Wearing Blue - I think she said her name was Lenore? Either way, she's very talkative. You should practice your people skills on her

I created this mod almost immediately after releasing my SOLDIER career for TS3, therefore this career was built on and is compatible with patch level 1.57 with all expansions/stuff packs. I haven't tried it with patch 1.63 but I see no reason why it should not work.

The rabbithole this career is assigned to is the Arboretum. Because Arboretums are gardens. And SeeDs grow in Gardens. Yes that naming scheme is from the actual game. I'm not sure how practical this rabbithole is but I thought it would be funny/cool/OK so it's probably just stupid but I don't care. For the benefit of anyone that doesn't have the Supernatural EP I've included a version where the rabbithole is set to the military base, so never fear.

Please make sure to only download and install the version that matches the EP you have - in other words, if you don't have the Supernatural expansion pack, download the Base Game version. If you have Supernatural, download the one that says REQUIRES SUPERNATURAL, otherwise the world will implode (your Sims world anyway)

There is data for Opportunities and Books included in the package that was copied and edited from twallans Mobster career, but I couldn't get the Opportunities to fire (not even cheats can help). I've left them in on the off chance that they do actually work, but if they don't then the core career works fine anyway.

Well thank you for looking at my mod, I hope you and your sims enjoy it

Additional Credits:
twallan for creating awesome mods
Creon for his great tutorial at SimsWiki.info
You for downloading this

If you need more info, see:
Back to download view
6 Comments / Replies (Who?)