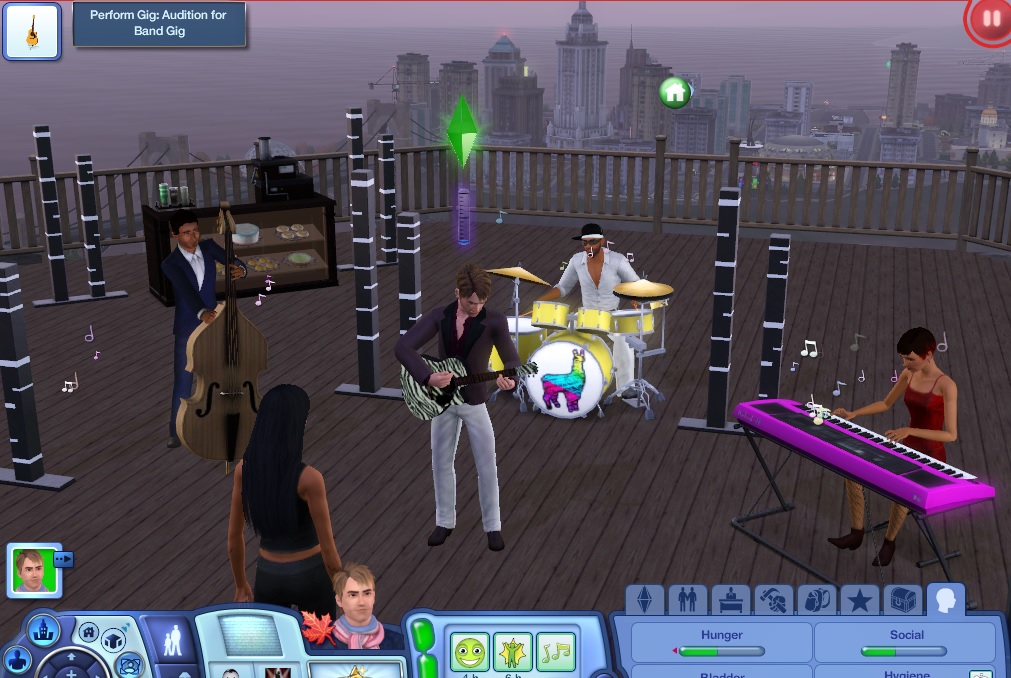 1-SEP-2014: Simplified the loading code. Added Italian translation (by mars97m) (EDIT: As of 30-MAR-2016 this mod no longer requires translations)

This mod adds a custom Audition for Band Gig interaction to all instruments (and certain role sims) which lets your band sims directly audition for band gigs at virtually any community lot, and if successful a band gig opportunity is generated for the band to perform.

A lot must havein order for auditions to be available. The type of lot does not matter so long as it is a community lot. Also the sim has to be part of a band (obviously) and must not have any Skill opportunities or you won't be able to accept band gigs.

To start an audition, have your band sim click on either the instrument you want the sim to play OR on a role sim on the lot of any of the above mentioned role types. All other band members will be summoned to the lot and and the band will play together for a short while for the role sim to watch (if you clicked on an instrument, the closest available role sim is chosen)

At the end of it, if the audition is judged based onIf deemed successful, the role sim will give your band a suitable gig opportunity to play on the lot either later that day or the day after. (You can still refuse the opportunity if you want) The opportunity given will be based on how many gigs the band has performed so far, the more gigs the higher paying the opportunity (though since the original opportunities were only meant for bars and lounges the texts may not make as much sense on other venues)

If the band fails the audition however, no opportunity is fired and the band is blacklisted from auditioning at the venue for the next 12 hours.

As an added challenge your band has to have completed at least 7 gigs before they can successfully audition at any Late Night Lounge or a Showtime Private Venue type lot (you can try but you will be immediately turned down). Have them build up some experience on other types of venues before tackling these lots. Similarly the band has to have completed the Gig Master challenge (15 gigs by default) before they can audition at a Big Show venue.

This is a script mod and should not conflict with tuning mods. Compatible with More or Less Gigs for Bands and Music Opportunities for your Sims for example and also NonaMena's Gig Scheduler mod

This mod does NOT change the actual requirements of the default band gig opportunities, it just forces them at the end of a successful audition ignoring all the usual restrictions:
By default these opportunities can only be generated for Late Night Bars and Lounges with bartenders only, and were written such that you started out at bars and worked your way to lounges but once you start playing at lounges you would never get the opportunity to play in bars again. Other than that they are notoriously rare to come by (I've personally NEVER gotten one without the Gig Scheduler mod) and when you finally get one you still had to wait at least 2 days before you can play the gig.
You can still receive gig opportunities from the phone or using an external mod like the Gig Scheduler or Master Controller but keep in mind that the default restrictions will be applied to them. (To change these restrictions you'll need a separate mod editing the Opportunities_EP3 XML)

Additional Credits:
The Jones' for S3PE Everyone who has helped and supported my modding so far

See: Game Help:TS3 CC Basicswiki for a full guide!
Back to download view
52 Comments / Replies (Who?)