Ancient Modernity for The Sims 2 (a house from The Sims 3: Ambitions) 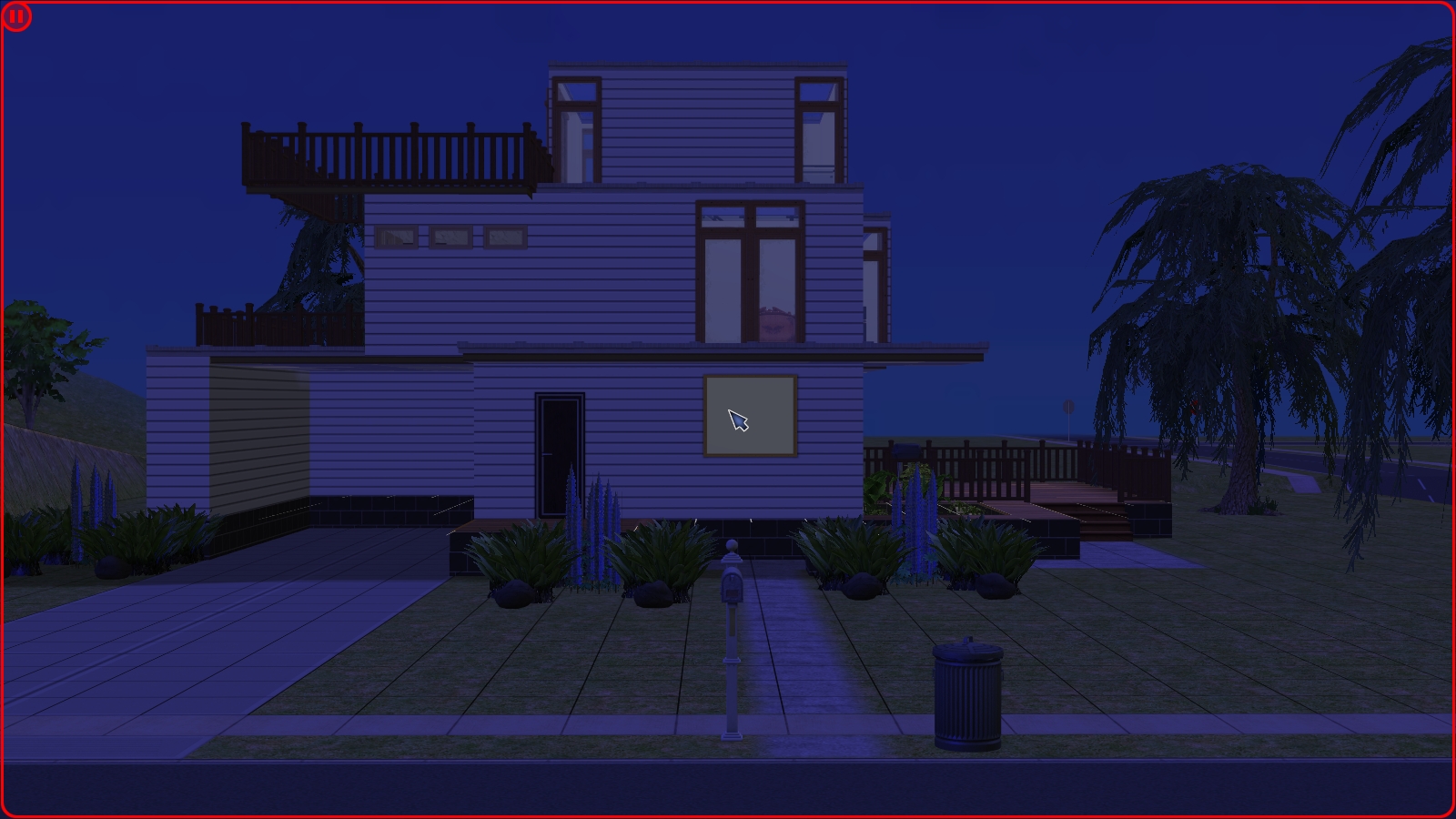 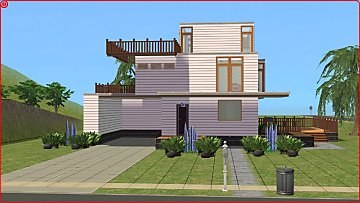 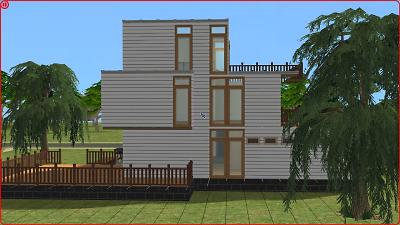 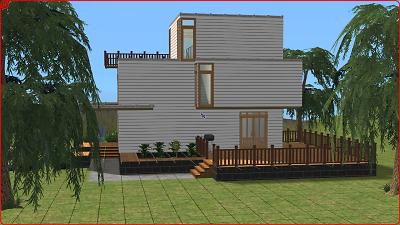 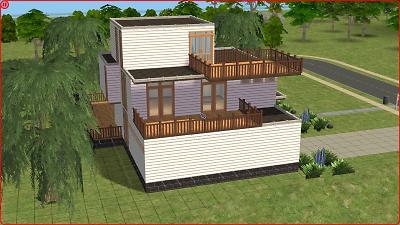 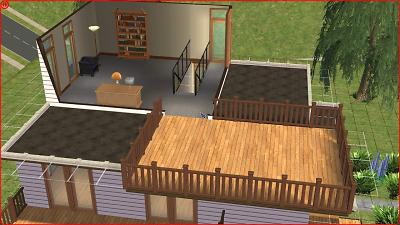 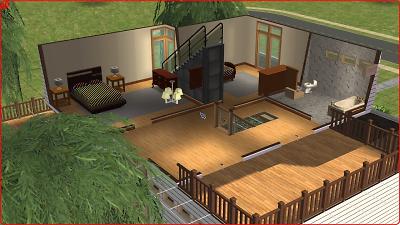 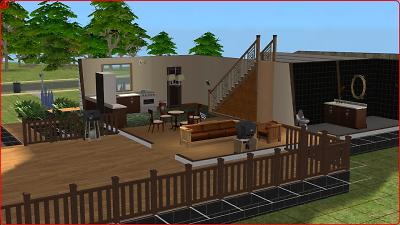 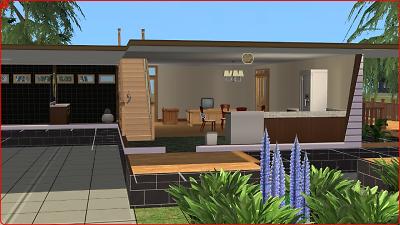 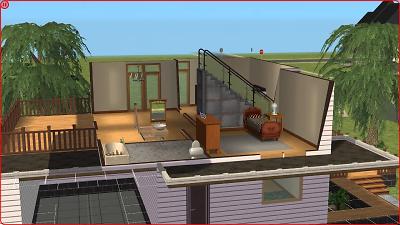 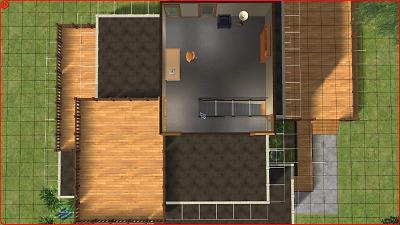 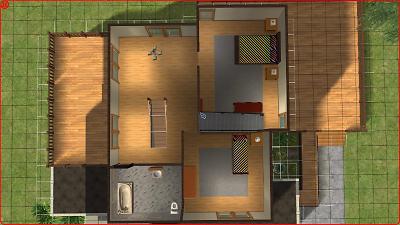 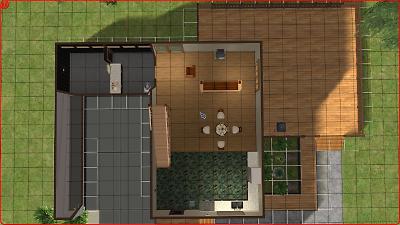 After playing on the city of Twinbrook in The Sims 3, I was really impressed by the Ancient Modernity house, a 3-store home with 2 bedrooms, two bathrooms and a very nice studio on the top level for crafters or artists. I was also impressed by how much of an unplayable bug ridden mess The Sims 3 is, which led me to reinstall The Sims 2 and play it instead. Anyway, since I have started a new neighborhood in TS2, I have been thinking about building the aforementioned Twinbrook house. Therefore, I took a few screenshots in TS3 and began working to copy the house as best as I could in The Sims 2.

- Obviously, the furniture, floors and wall paintings in both games are different from each other. I tried to keep as close as possible to the color and design found in TS3, but a few instances, like both bathrooms' floor and walls, the kitchen's floor, the vegetation in the terrain and the bookcase on the top floor forced me to get creative. I will let you be the judge of whether my creativity is a good thing or not.

- Related to the above, behind the garage there are two rooms: a bathroom and a laundry room. Because of the widening of the house, I had to choose between expanding the outer wall or the laundry room. Since I believe it would be stupid not to use the extra room, I have decided to expand the laundry room. And since there is no laundry in The Sims 2, you can use that empty 3x3 room for whatever you want (it could be a vampire bedroom, a prison for killing sims by starvation, a bedroom for a pet or whatever you can think of).

- In the middle level, the bathroom is lit by two wall lamps on each side of the mirror. In TS3, both the mirror and the lamps fit nicely in a two square area. Howerver, I had to widen the bathroom by one square in order to fit all of that on the wall. In order to keep the design of the house as intact as possible, I have expanded the hall with the staircase in front of the bathroom too. Fortunately, the accidental garage expansion helped set things right and the result is a slightly larger, but ultimately not so different house.

- I have already mentioned the vegetation, but I will elaborate further: it is probably the biggest difference between the two games. Except for the three willows around the house, none of the plants in TS2 even remotely look like the Swamp Pampass Grass in TS3. Besides, there is a small area with two plants surrounded by a brick foundation which could not be done in TS2 (the game recognizes the enclosed area as an inside room, despite the lack of a rooftop). The solution I found was to plant unrelated plants in the lawn and fill the enclosed area with a few vases. Instead of trying to mimic the Swamp Pampass Grass, I went with whatever plants I thought would look good. Again, I hope my idea of aesthetics is good enough.

- The screenshots were taken through IrfanView (http://www.irfanview.com), so thanks to its creator, Irfan Skiljan.

- The original house was made by Maxis for The Sims 3: Ambitions. Thanks for creating such a beautiful house, Maxis, even though your (sincerely great) game got more and more glitchy with each expansion to the point of being unplayable if you have Seasons and Island Paradise installed. Why do you do this to us, Maxis?

- Thanks to Tom Duhamel for his Enhanced Gameplay Cameras (http://modthesims.info/d/312294).