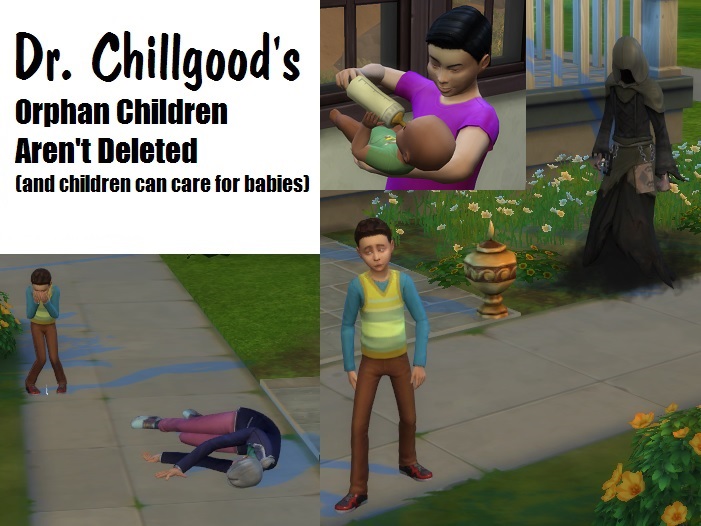 692 Thanks  Thanks     286 Favourited
NOTICE 10/23/2017: After a falling out with EA's community management, I have deleted my Origin account and have retired indefinitely from The Sims.


The war against the Child Deletion Disservices wing of Sim Social Services is over! I have taken out the last of their Child Death Rays. They had one each for starving kids, failing kids, and orphaned kids. In other words, if you don't have the first two of my mods and you hate the Death Rays as much as I do, go pick those up first.

Implementation: I lowered the minimum age for wiping out orphans and sending everyone to the hammerspace nanny from teen to child.


Originally, I had a companion package that would let children care for babies. This would be a very real risk now that a child-and-baby-only household is possible. I realized that such a mod would be usable, and even useful, even without my script mod.


The companion package also came with a text change, to reflect a baby-only situation. The messages are rewritten - since they're babies, they're now adopted out to families in far-off towns, with the implication that a random townie a generation down the road may very well be the baby that was adopted out.

Please, do not abandon a baby if you have a ghost-only household. I have no sympathy for deadbeat ghost guardians. At the very least, hit "Age Up" before you hit "Return To Netherworld".

IMPORTANT: If you are using Scumbumbo's "Smarter Baby Care", you will need the override edition. Like in TS3 for some mods, you will need to set up an override folder. Add the following to your Resource.cfg:

Then, put my override package in the Overrides subfolder of your Mods folder. This ensures that you have the functionality of both mods.

Additional Credits:
Scumbumbo, for giving me permission to alter his mod and integrate it with mine.
SimGuruEugi, for confirming that my script mod compiled correctly, when I asked about it on the official forums.

I have updated the Pay Bills interactions to allow children to perform them. The utility companies were secretly working with the remnants of the Child Deletion Disservices to yank the power and water of orphans.

Need more information?
Back to download view
72 Comments / Replies (Who?)

My "Kids Can Die Of Anything" (no Death Ray for starving kids): http://modthesims.info/download.php?t=544156

My "No Losing Kids To Bad Grades" (no Death Ray for failing kids): http://modthesims.info/download.php?t=544152